“They have a lot of time to make up for," said Benny Hunter, project co-ordinator at Da’aro Youth Project. 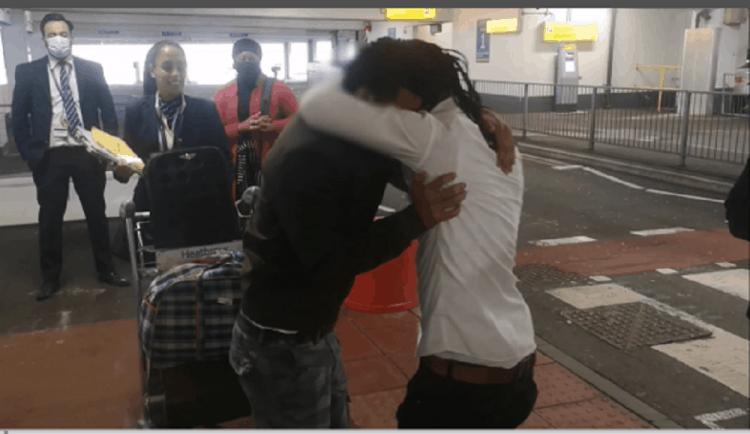 An Eritrean teenager who fled from a refugee camp hugged his brother at Heathrow Airport after five years apart.

Eyob, 17, was reunited with his brother, Adi, 14, after the latter endured a period of homelessness having escaped a refugee camp in Tigray, Ethiopia.

Adi was granted entrance to the UK from the Home Office and reunited with his brother on Thursday.

Adi’s journey to the UK began at a youth club in south London called Da’aro Youth Project, a community-led organisation which supports young asylum-seekers and refugees from the Horn of Africa.

Every Tuesday they run a weekly youth club for 14 to 21-year-old asylum-seeking and refugee children and young people from Eritrea, Ethiopia, Sudan and Somalia called Injera Club.

Benny Hunter, project co-ordinator at Da’aro Youth Project, told the PA news agency: “Eyob, who attends our youth club, had approached our case work staff about his younger brother who he was worried about, who was at that time living in a refugee camp in northern Ethiopia.”

Eyob managed to escape to the UK a few years ago while Adi fled Eritrea when he was 10 years old, and had been residing in a refugee camp in Tigray ever since.

Mr Hunter continued: “We then connected Eyob with a lawyer to get legal advice about bringing his brother to the UK through an outside of the rules family reunification application because asylum-seeking children don’t have any legal rights to family reunification.

“During the period of time the application was bring prepared, the war broke out in northern Ethiopia in that region and we lost contact with Adi.”

According to the UNHCR, fighting began in the Tigray region in November 2020.

During a joint mission to the area with the United Nations Office for the Co-ordination of Humanitarian Affairs (OCHA), the UNHCR found the Shimelba and Hitsats refugee camps camps destroyed and all the humanitarian facilities looted and vandalised.

Around 20,000 refugees had been living in the two camps and many fled for safety, said the UNHCR.

Mr Hunter added: “The entire region had a media blackout and network blackout, and we knew the camp had been destroyed because the UN took images of the refugee camp.”

Adi reached out to Eyob at the end of 2020 and told his brother he managed to escape the camp and reach Addis Ababa, the capital of Ethiopia, but was homeless.

Both brothers were able to chat to each other via WhatsApp and Facebook whilst Adi was there.

Mr Hunter said: “When Adi was in Addis Ababa, the application was submitted to the Home Office and they issued a visa two months ago.

“Thankfully that was successful and then they can be together again.

“They have a lot of time to make up for.”

Both brother’s names have been changed to protect their identity.