“The alarm bells are deafening and the evidence is irrefutable", the IPCC said in its 'code red' report. 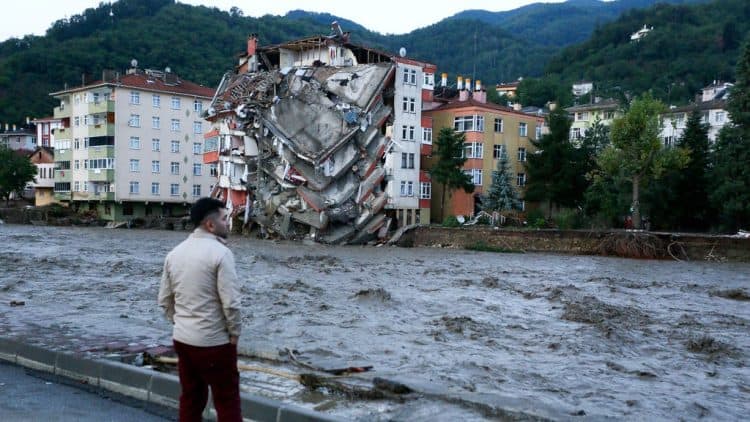 Alok Sharma has warned that “human behaviour is alarmingly accelerating global warming” ahead of the Cop26 conference.

The government minister – who is tasked with making a success of the upcoming climate talks in Glasgow – said failing to limit warming to 1.5C would be “catastrophic”, adding that a report by the Intergovernmental Panel on Climate Change is the “starkest warning yet” about what the future could hold.

This week the IPCC issued a ‘code red’ for humanity, saying “the alarm bells are deafening and the evidence is irrefutable: greenhouse gas emissions from fossil fuel burning and deforestation are choking our planet and putting billions of people at immediate risk.”

With that in mind, here are ten climate emergencies that happened around the world this week alone:

1. Russia in state of emergency over fires in Siberia

Russian authorities have expanded a state of emergency in north-east Siberia to bring in outside resources to combat wildfires that have engulfed the vast region.

The move should help organise the transfer of firefighting resources from other regions to help fight the blazes in Yakutia, which is Russia’s largest territory at 762 million acres.

Flooding in central China has continued to cause havoc in cities and rural areas, with authorities saying another 21 people had been killed and another four were missing.

The latest deaths add to the more than 300 people killed in flooding last month in Henan province just to the north.

The vast majority of those victims were in Zhengzhou, Henan’s provincial capital, where at least 292 died, including 14 who were trapped when the subway system was inundated.

Up to four people are feared to have died after torrential rain pounding south-western Japan triggered a mudslide, and threatened to cause more flooding and more landslides in the region.

The mudslide in the city of Unzen in Nagasaki prefecture hit two houses, with four residents inside.

A woman in her 50s was pronounced dead, while a man in his 60s was seriously injured, according to Unzen city officials. Rescue workers are searching for the two other residents.

The death toll from severe floods and mudslides that struck northern Turkey has risen to 27 after 10 more bodies were recovered by rescue teams overnight.

The floods battered the Black Sea coastal provinces of Bartin, Kastamonu, Sinop and Samsun on Wednesday, demolishing homes and bridges and sweeping away cars.

Hundreds of people were rescued by helicopters, while 1,700 others were evacuated. Dozens more people are believed to be missing.

5. Wildfires advance in multiple US states

A wildfire bore down on rural southeastern Montana towns as continuing hot, dry weather throughout the West drove flames through more than a dozen US states.

Meanwhile, the Dixie Fire, which started on July 13 and is the largest wildfire burning in the nation, threatened a dozen small communities in the northern Sierra Nevada even though its southern end was mostly corralled by fire lines.

The blaze had burned over 780 square miles, destroyed some 550 homes and nearly obliterated the town of Greenville.

It was 30 per cent contained.

On Wednesday, the Montana fire displayed extreme behaviour and had grown by tens of thousands of acres, according to the National Interagency Fire Centre.

Italy baked in sweltering temperatures that continued to drive deadly wildfires on Wednesday, with Spain and Portugal bracing for the arrival of a dangerous heatwave that has grilled south-eastern Europe and is starting to push west toward the Iberian peninsula.

A heatwave fed by hot air from North Africa has engulfed large parts of the Mediterranean region in recent days, contributing to massive wildfires and killing dozens of people in Italy, Turkey and Algeria.

In Greece, huge wildfires have ravaged forests for a week, destroying homes and forcing evacuations.

Sicily recorded on Wednesday what may be a new European temperature record, though weather experts cautioned that the measurement still must be confirmed.

The Sicily region’s agriculture-meteorological information service, SIAS, reported that a temperature of 48.8C (119.84F) was reached at the island’s Syracuse station.

California’s largest single wildfire in recorded history kept pushing through forestlands on Tuesday as fire crews tried to protect rural communities from flames that have destroyed hundreds of homes.

Clear skies over parts of the month-old Dixie Fire have allowed aircraft to rejoin nearly 6,000 firefighters in the attack this week.

“Whether or not we can fly depends very much on where the smoke is. There’s still some areas where it’s just too smoky,” fire spokesman Edwin Zuniga said.

Burning through bone-dry trees, brush and grass, the fire by Tuesday had destroyed more than 1,000 buildings, including nearly 550 homes. Much of the small community of Greenville was incinerated during an explosive run of flames last week.

Algeria’s president has announced that 25 soldiers were killed saving residents from the wildfires ravaging forests and villages east of the capital.

The president of the sprawling North African nation tweeted that the soldiers saved 100 citizens from the blazes in two areas in the mountainous Kabyle region, home of the Berbers.

Four other soldiers were seriously burned and seven others also had burns, the Defence Ministry said.

Thousands of residents have fled to safety from a wildfire that burned for a fourth day north of Athens as firefighters tried to stop the flames reaching populated areas, power stations and historic sites.

On the nearby island of Evia, the coast guard mounted a massive operation with patrol boats and private vessels to evacuate hundreds of people by sea.

With a protracted heatwave scorching the country, the blaze tore through forest areas 12.5 miles north of the capital, destroying more homes.

The dangerous fires are among some 100 large blazes burning on Wednesday across 15 states, mostly in the West, where historic drought conditions have left lands parched and ripe for ignition.

Burning through bone-dry trees, brush and grass, the fire has destroyed at least 1,045 buildings, more than half of them homes in the northern Sierra Nevada.

Newly released satellite imagery showed the scale of the destruction in the small community of Greenville that was incinerated last week during an explosive run of flames.

Related: Elevenses: The beginning of the bleed