A pig that was given just weeks to live has been saved after being taken in by a kind-hearted owner. Emily Keates, 25, fell in love with wild boar cross Fella after fearing he was destined for the slaughter house. She paid £70 to take him home – only for him to be diagnosed with […] 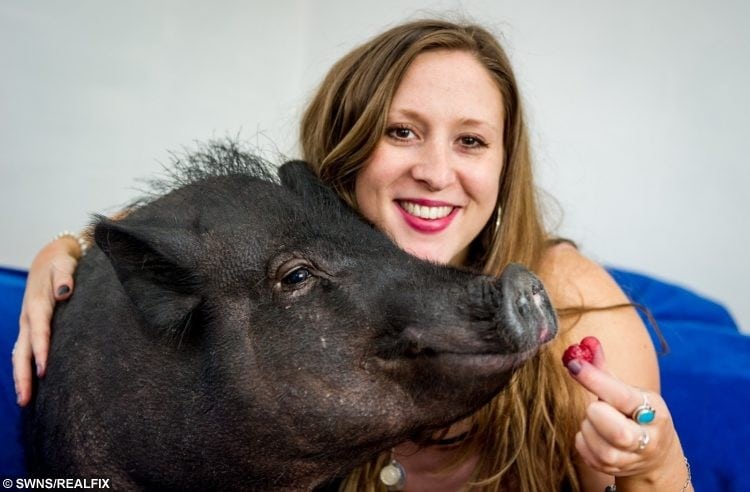 A pig that was given just weeks to live has been saved after being taken in by a kind-hearted owner.

Emily Keates, 25, fell in love with wild boar cross Fella after fearing he was destined for the slaughter house.

She paid £70 to take him home – only for him to be diagnosed with depression and three tennis-ball sized cancerous tumours on his abdomen.

But despite being given just a fortnight to live in January, he has shown no signs of shuffling off any time soon after settling into a new life with Emily’s seven dogs. 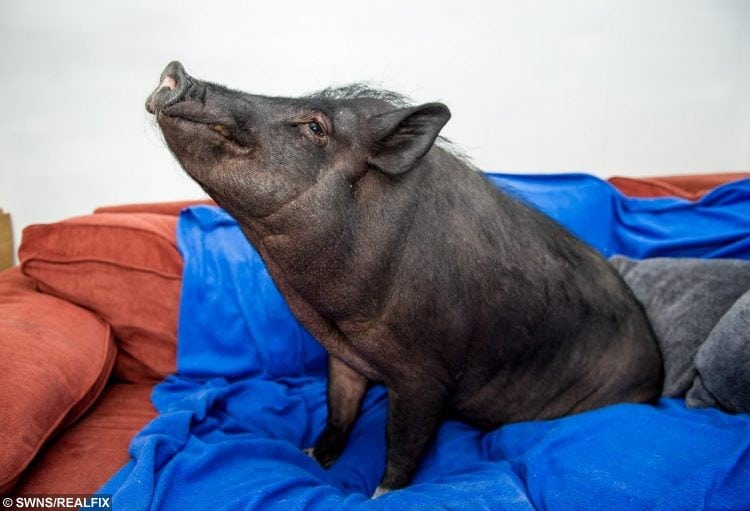 Emily said: “I went one day to see some micro pigs and they were so cute.

“But when I told the lady who owned them that I was vegan, she asked me how I couldn’t eat sausages and bacon.

“Straight away I knew I needed to take Fella home.

“I actually thought he was a girl and named him Bella, so had to quickly change his name when I realised he was actually a boy.”

But just weeks after Emily adopted Fella in November, he rapidly lost four stone, only for vets to find he was riddled with cancerous tumours.

But having already fallen for Fella, Emily refused to take their advice and him down – instead choosing to give him some tender loving care. 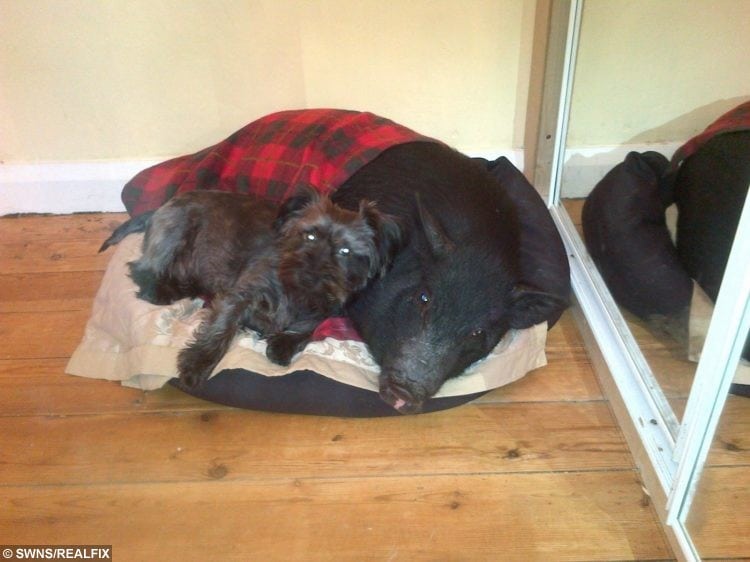 She also raised £2,000 to pay for a private two-day chemotherapy session to blast the tumours.

The financial administrator said: “I felt awful for him and couldn’t believe it when I got a call from the vet saying that they recommended putting him to sleep.

“I was so upset and told them that it wasn’t not an option. It really scares me because if I hadn’t of stuck to my guns, he wouldn’t be here today.

“I have signed an official document to state that Fella is a ‘pet’ pig and will never enter the food chain.

“This means that all chemotherapy options are available to him – not the case for other pigs.”

Fella was given two weeks to live but was nursed back to health through herbal remedies and fresh fruit and veg.

Back home in Soham, Cambs., Fella spends most of his days sitting by the radiator warming his bones and going on regular family walks.

Emily said: “They all get along really well. Pigs are not horrible animals and all the dogs kiss his nose and cuddle up to him because he is wrong.

“I’m so glad I did save him because he might not be alive now.

“He’s my best friend – I’ve not ever had a connection like that with any animal.”

Emily claims Fella is now happy and pain-free but admits his tumours once day will kill him. 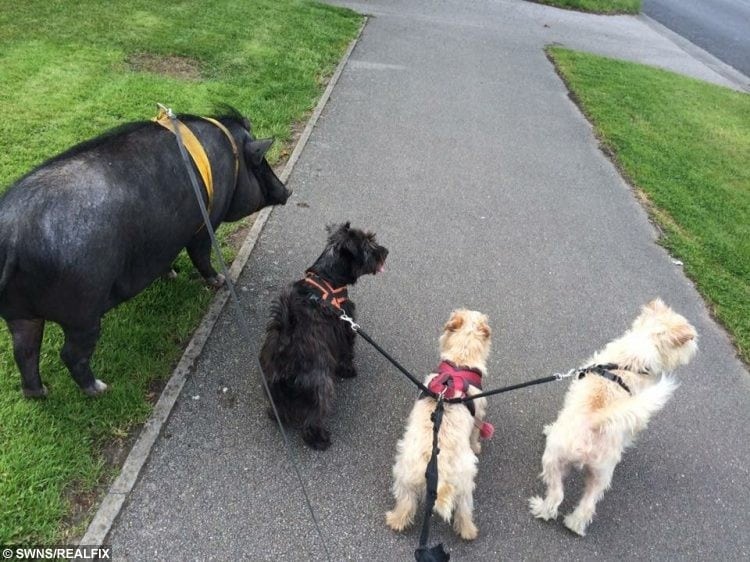 She said: “His tumours are likely to eventually end his life but for now, he’s pain free, having daily walks and in receipt of a lot of love.

“He is fine these days but we keep a close eye on him.

“I believe good things come to good people. He was supposed to be passed on already but the power of love and asking for help I believe bought him good energy.

“That in itself is a miracle.”

Fella has 13,700 Facebook fans who have been following his journey, and even some who have stopped eating pig due to him. 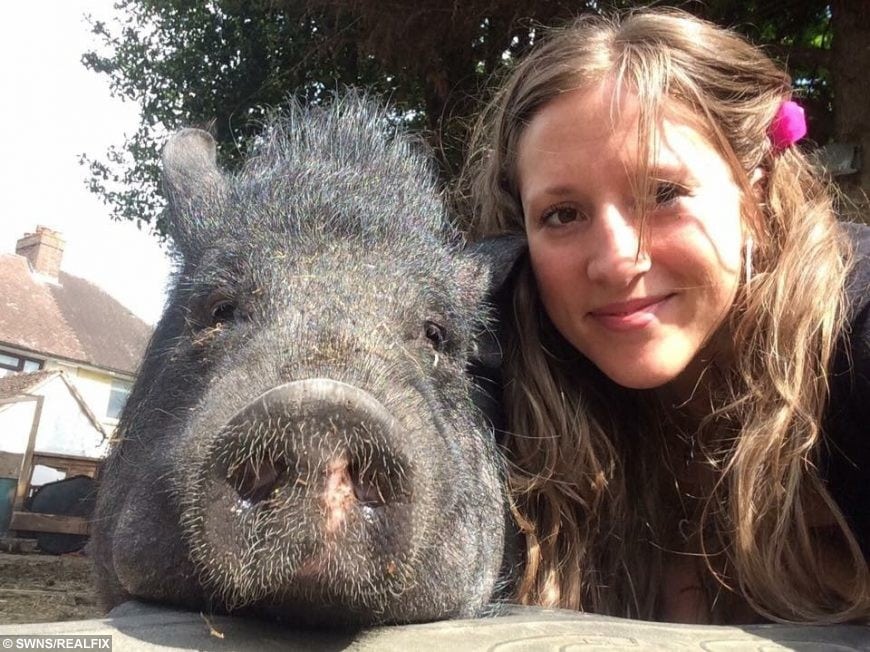 Emily, who is four months pregnant with her partner John, is planning to move into a property with a bigger garden for Fella and her two other pet pigs, 30 stone pot-belly ‘Miss Lady’ and another wild boar cross, 13 stone ‘Bobby’.

She now hopes Fella will survive long enough for her child to know her best friend.

Emily added: “I have had some people that have said that they are going to stop eating pig because of how cute and nice Fella is.”

Emily and her partner John Amato, are expecting a baby girl on 15 July and are going to name her Delilah.