The ad for Viva! - featuring a pig called Hope - was screened before the 12A-rated films Star Wars: The Last Jedi and Jumanji: Welcome to the Jungle

by Joe Mellor
in Food and Drink, Media, Must Reads 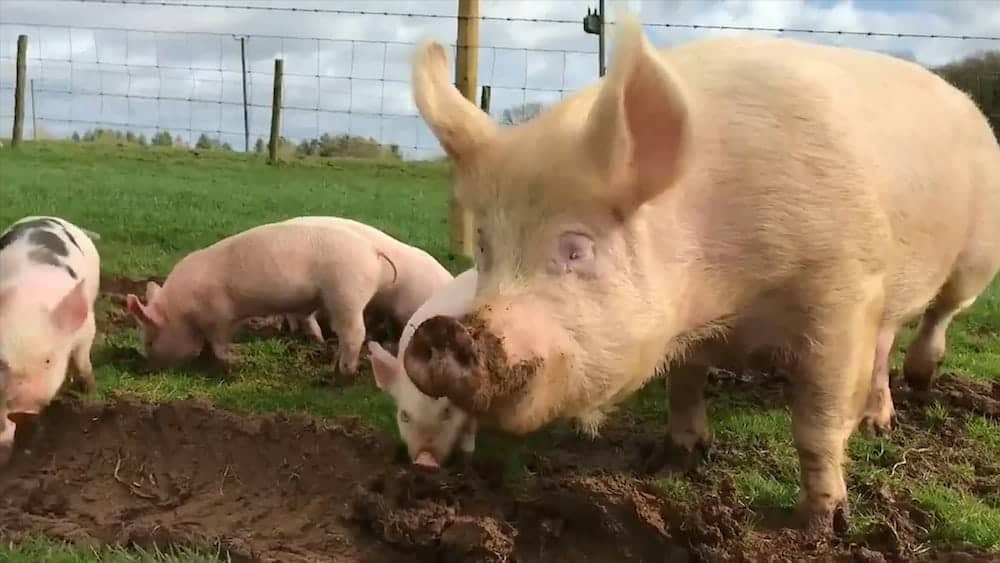 The ad for Viva! – featuring a pig called Hope – was screened last December before the 12A-rated films Star Wars: The Last Jedi and Jumanji: Welcome to the Jungle.

It triggered complaints from the National Pig Association and seven members of the public, including one that a claim in the ad that “90 per cent of pigs are factory farmed” was misleading.

Watchdogs upheld complaints regarding two of the three issues investigated and banned the ad.

It was found to be in breach of rules on ‘misleading advertising’ and ‘substantiation’ by the Advertising Standards Authority (ASA).

The ad was banned, and Viva! was told to ensure any future ads did not mislead.

But a complaint that the 12A classified ad contained content which was likely to “cause distress without justifiable reason” was rejected.

The ad featured a pig running around in a field, and a voice-over stated: “All creatures can experience pleasure.”

The voice-over added: “She is a pig called Hope rescued by Viva. This is her dance of joy for being outdoors for the first time”.

Subsequent footage showed individual or small groups of pigs indoors behind the bars of a pen and a number of pigs in a very crowded pen.

The voice-over stated: “It’s something most pigs will never know as 90% are factory farmed. Set them all free. Try Vegan.”

The National Pig Association complained that the ad was misleading because they believed it featured farming methods that were no longer allowed in Britain.

The Association said the claim “90% of pigs are factory farmed” was also misleading as it implied that the vast majority of pigs farmed in the UK were restricted to the indoors and never experienced the outside.

Viva! said the intensive farming footage shown in the ad was all taken on farms in Britain and that the ad showed the rack, which they maintained was used legally on most UK pig farms, when sows were artificially impregnated.

Referring to Defra figures, Viva! calculated that more than 4.4 million pigs were reared for meat in the UK in any six-month period.

But an ASA spokesman said: “We considered consumers would interpret the ad to mean that pigs that were intensively or factory farmed in the UK would be kept in conditions similar to those shown in the indoor footage that appeared in the ad most of the time.

“Defra’s guidance allowed for pigs to be held in conditions where they were unable to turn around for the period between seven days before the predicted day of farrowing and the day on which the weaning of the piglets was complete, which we understood was when the piglets were between 21 and 28 days old.

Defra’s guidance also allowed for pigs to be confined for certain veterinary procedures, including artificial insemination; when being fed and weighed and while their accommodation was being cleaned.

“There were circumstances, therefore, in which scenes of pigs being kept in narrow stalls or in groups would be in line with Defra’s guidance.

“However, in Viva!’s ad, the dark lighting and close up and brief nature of some of the footage meant that it was not clear why pigs were being accommodated in the way shown or for how long.

“We considered the information supplied by Viva! did not demonstrate that pigs that were intensively or factory farmed in the UK would be kept in the indoor conditions shown in the ad or similar most of the time.

“We therefore concluded that the ad was misleading.”

He added: “We acknowledged that the ad contained images and subject matter that some viewers would find challenging.

“We considered that the decision to limit the cinema ad to being shown around 12A, 15A, 15 and 18 certificate films only meant it would be seen by an audience that was likely to be able to understand the nature of the debate that the ad raised and that it was not out of place in the context of those films.

“The ad must not appear again in the form complained of.

“We told Viva! to ensure their ads did not mislead about, for example, how animals would be accommodated in intensive farming environments.”