These are the heart-warming moments brave children who have beaten cancer mark the end of their life-saving treatment – by ringing the end of treatment bell as they leave hospital for the final time. The youngsters carry out the symbolic gesture to celebrate the end of gruelling therapy as their long-suffering families, and medical staff […] 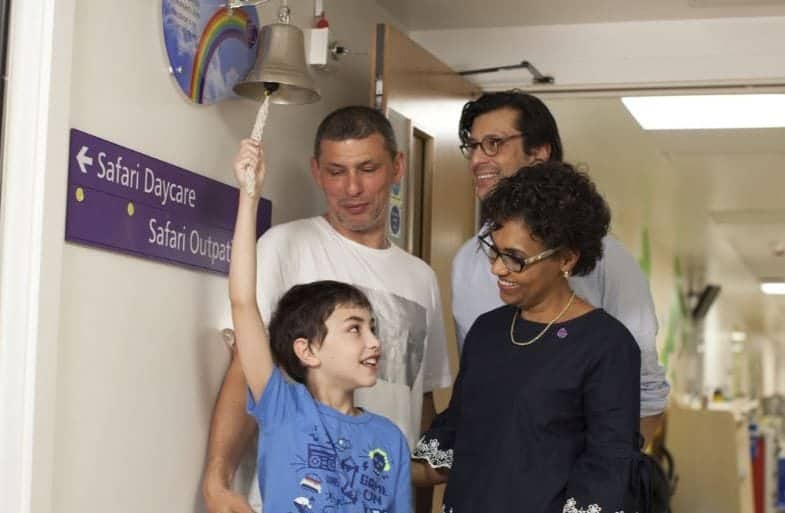 These are the heart-warming moments brave children who have beaten cancer mark the end of their life-saving treatment – by ringing the end of treatment bell as they leave hospital for the final time.

The youngsters carry out the symbolic gesture to celebrate the end of gruelling therapy as their long-suffering families, and medical staff who nursed the stricken kids, form a ‘guard of honour’ and applaud.

The bells feature in hospitals across the country, including Bristol Children’s Hospital and Great Ormond Street, where thousands of children are treated for the disease.

Every day, in the UK, 12 families will be told their child has cancer.

And every week, 10 children and young people tragically lose their fight

But the good news is that estimated survival rates for childhood cancer in 2017 are thought to be around 84 per cent, up from 64 per cent in 1990.

And while there are an estimated 35,000 survivors of childhood cancer alive in the UK, this number is growing by around 1,300 a year.

Children with Cancer UK, which is marking its 30th anniversary this year, is hoping more children and their families will be able to celebrate the ‘all clear’ with the symbolic end of treatment bell.

The charity is marking the milestone anniversary with the launch of a new campaign centering around the symoblic ring of the bell heard in hospitals around the world when someone beats the disease. The bell features on the charity’s new website, logo and video highlighting its work.

Children with Cancer UK also focus on helping families throughout the process from diagnosis, through finding treatment to the aftermath.

Survivors can end up with long-term emotional and physical problems, sometimes as a result of the aggressive treatment needed to save their lives.

Patients also typically face a five-year wait after finishing their treatment before they can be considered cured.

Sam Sharland, aged 10, from Woking, was diagnosed with acute lymphoblastic leukaemia in 2013, at the age of just five, after suffering pains in his neck and hip.

After three years and four months of treatment at The Royal Marsden, Sutton, he finally had his chance to ring the ‘end of treatment bell’ after his final course of chemotherapy.

Mum Tamsin said: “Sam is thriving now he is ‘off treatment’. It took a couple of months for his strength to return and he had a difficult time with a few side effects.

“A long summer holiday break and a trip to France to see our friends really helped. Cancer has taught our family to make the most of life.”

Oscar Beardmore, from Wednesbury, West Midlands, was born in 2014 and grew into a healthy and happy toddler.

But his mum Cheryl was given the heart-breaking news in June 2017, that he was diagnosed with Rhabdomyosarcoma.

Within days of his diagnosis, the youngster was admitted to hospital to start the first of 13 sessions of strength-zapping chemotherapy.

Months later, doctors decided to operate to remove the mass, but despite this, Oscar still needed proton therapy treatment in Germany to reduce the risk of a relapse.

Cheryl said: “We lived in Germany for seven weeks while Oscar received 28 sessions of proton therapy while under general anaesthetic, five days a week.

“This was Oscar’s final course of treatment, and on our return to the UK he finally got to ring the end of treatment bell.

“As a family we have been to hell and back, but Oscar in true ‘superhero style’ has shown tremendous courage throughout and has never complained.

“It’s Oscar who has been our ‘rock’ and got us through the darkest of days when it should have been the other way around.”

In the UK, cancer is the most common cause of death for children aged one-14, while for teenagers it is second only to road accidents.

Brain tumours kill more children and young people than any other cancer, with one type, Diffuse intrinsic pontine glioma (DIPG), currently having no cure.

“When developing our new logo we wanted to show the progress made in childhood cancer treatment over the past thirty years since the charity was established, but also how much more work there is to do.

“We hope our new TV advert and logo will help show how vital scientific research is to make safer and kinder cures for childhood cancers.

“Childhood cancers are different to the cancers in adults, so it’s crucial that we continue to invest in innovative new treatments like precision medicine that could improve survival rates in even the hardest-to-treat cancers, reduce the burden of toxicity for young cancer patients and help keep families together.

“The end of treatment bell is a symbol of the world we are helping to create.

“The only way we can increase survival rates and find out why children get cancer is by investing in cutting-edge research.

“We won’t stop our work until every child cancer sufferer gets to ring the end of treatment bell.

“We’d also like to thank the wonderful people at End of Treatment Bells for placing the bells in hospitals around the UK.”

By Ben Gelblum and Gemma Francis