A student paralysed from the neck down two weeks before he started university has now graduated – with a FIRST. Brave Rob Camm, 23, was left with horrific injuries in September 2013, just two weeks before the start of his first term. He was one of six passengers in a car driven by a teenager […] 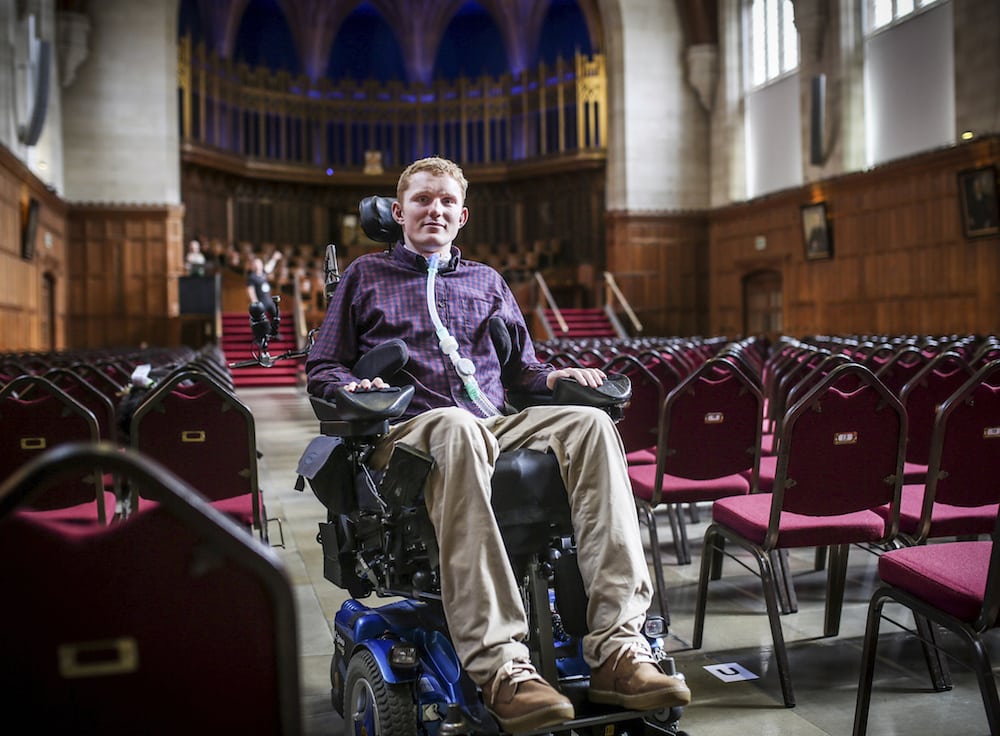 Rob Camm, who suffers from tetraplegia and is graduating from Bristol University with a first class degree. See SWNS story SWUNI: A student who is paralysed from neck down in a car crash has overcome the odds to graduate with first class honours from Bristol University. As new graduates grace the stage in Wills Memorial Building today, Rob Camm will join them in reaching yet another milestone in his life. The 23-year-old will graduate with a BSc in politics and philosophy, and will be welcomed with cheers from friends and family. It is fair to say life has not always gone his way. In September 2013, rugby player Rob was two weeks away from going to university when he was involved in a crash.

A student paralysed from the neck down two weeks before he started university has now graduated – with a FIRST.

Brave Rob Camm, 23, was left with horrific injuries in September 2013, just two weeks before the start of his first term.

He was one of six passengers in a car driven by a teenager who was later jailed for two years for drink and dangerous driving.

But determined tetraplegic Rob did not let being paralysed from the neck down stop him from chasing his dreams.

He will proudly join his fellow students on stage today (Fri) to receive his BSc with first-class honours in politics and philosophy.

He said: “Before the accident, I had always been the type of person who wanted to be the best they can be.

“Getting a first has made me feel that way again. I couldn’t believe it when I saw my result. I had to keep refreshing the student information page to be sure.”

Rob was initially due to take up a place at York but following the accident he decided instead to study at Bristol University to be closer to his family in Breadstone, Glos.

His outstanding educational achievements have been made possible by special technology arranged by the university.

Voice recognition software allowed him to write essays, and a system called SmartNav enabled him to move a mouse pointer around the screen using head movements.

The library also ensured any books or research papers were scanned in order to allow Rob to read them on a computer.

Any lectures or seminars he missed were recorded for him to watch at home.

And although he has not been able to take part in many of the typical social activities of a student, Rob says attending university has given him a sense of purpose.

“University has been part of trying to get my life restarted, learning what I can and cannot do,” he said.

“Being a student at Bristol has been great. I’ve especially enjoyed being taught by leaders in their field; it’s really inspiring to hear them talk about subjects they’re passionate about.

“Meeting people and socialising has been hard, but many things are possible with some planning.”

He added: “The disability services team has been fantastic at helping me and my tutors have been really good too.”

Rob, who now lives in his own flat in Bristol, plans to follow his ambitions to become a lawyer, studying a law conversion course at the University of Law in Bristol.

He also plans to take part in Tough Mudder this year – for the second time – using a special wheelchair which he controls with his chin.

Rob’s personal tutor at Bristol University, Dr Columbus Peoples, said: “In many ways I’m not surprised Rob got a First.

“Although he’s had additional barriers to overcome, he’s always been very determined and has really embraced the course.

“He’s got better and better throughout the three years, he’s worked incredibly hard, has shown real enthusiasm and has great intellectual ability.

“We’re incredibly proud of him.”

Rob will collect his degree this afternoon (Fri) at Wills Memorial Building in Bristol.