While the exact location of the Boeing 777 with 239 people on board still remains unknown, researchers hope their new model will help in future searches

by Tony Whitfield
in Must Reads, Travel 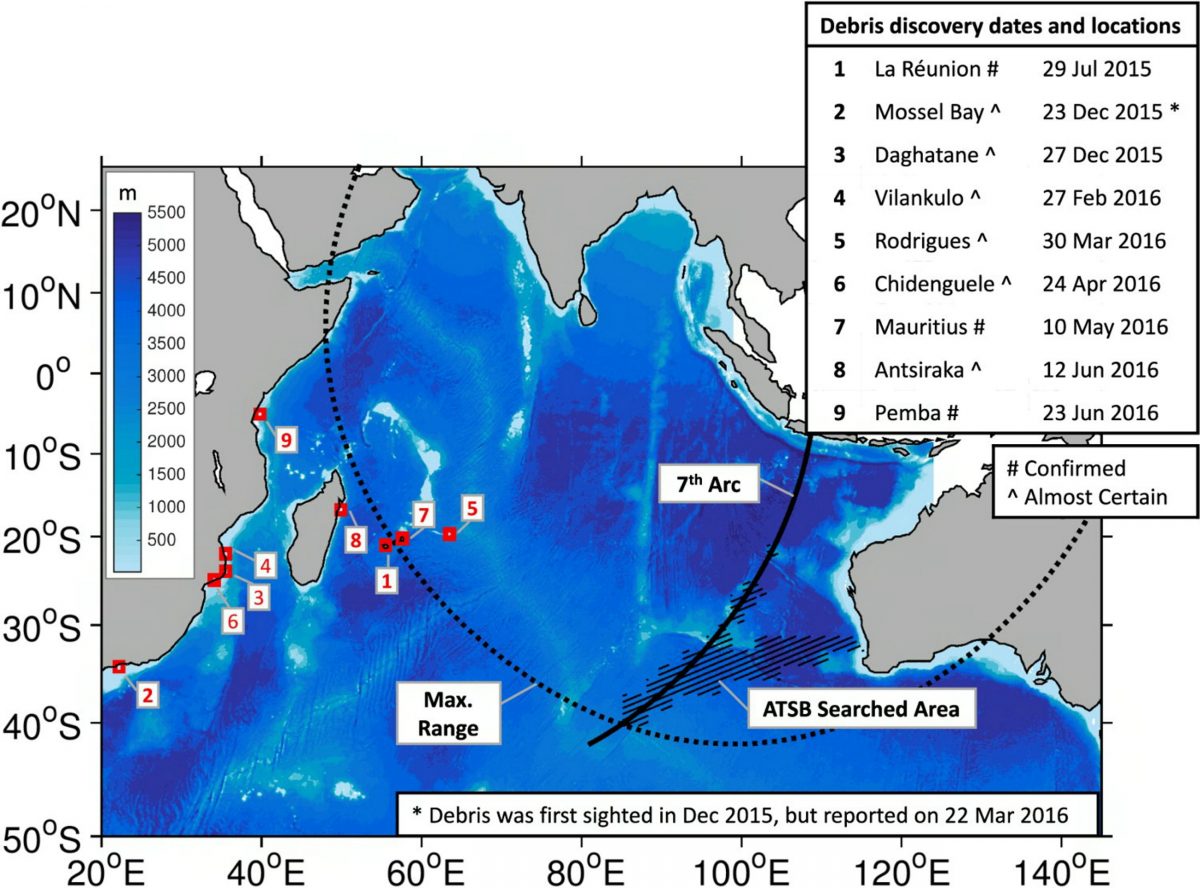 The search for missing Malaysia Airline MH370 was flawed because the drift of objects in the uppermost layer of the ocean surface was not taken into account, a study found.

While the exact location of the Boeing 777 with 239 people on board still remains unknown, researchers hope their new model will help in future searches.

It could also help track the spread of plastic waste or passively drifting organisms such as fish larvae or plankton.

British, German and French scientists said along with surface ocean currents and wind, the so-called “Stokes drift” was also of central importance for calculating how debris from the aircraft drifted before making landfall.

Stokes drift describes the net movement of floating objects caused by the passing of surface waves.

And the new study proved Stokes drift was much more important for analysis than previously assumed.

At least nine items belonging to the aircraft that disappeared from radar in March 2014 washed up along the western coasts of the Indian Ocean.

Since then scientists have been trying to calculate the route the debris took backtracking it to a possible crash site.

In future just five items could help them locate a crash site.

Lead investigator Dr Jonathan Durgadoo said: “Ignoring Stokes drift in the simulations can lead to major errors, as we have demonstrated with the MH370 example.

“For any application where surface drift is studied, Stokes drift should be included to provide more precise tracking results.”

He said: “Detailed analysis of satellite communications, provided in the form of handshakes between the aircraft’s engines and satellites, indicated that the plane had lost contact along the ‘7th arc’ around the position of the satellite, which extended from Java, Indonesia, to the southern Indian Ocean, southwest of Australia

“However, the precise location of the aircraft’s last position was not known.

“In the following months, the Joint Agency Coordination Centre, led by the Australian government, started the search for the aircraft around the 7th arc.

When items of debris washed ashore in subsequent years there was renewed hope the location of the doomed airliner could be pinpointed.

Shortly after the sighting of the first piece of debris, a flaperon on La Réunion in 2015, GEOMAR scientists started to simulate its possible drift in the hope of narrowing down the area of the possible crash site.

A few months later, a European consortium was able to refine the calculations by adding the effect of surface waves.

They suggested the most likely crash-site region of the MH370 was located west of Australia, north of the then search area.

But after searches proved fruitless, researchers from GEOMAR, the UK’s National Oceanography Centre (NOC), the European Centre for Medium-Range Weather Forecasts (ECMWF) in Reading and the Mercator Océan group in Toulouse continued their work on simulating the drift of marine debris.

The goal was to establish strategies for future quasi-real-time applications of the drift of objects or organisms in the ocean.

They addressed the importance of considering surface waves in the calculations, of using advanced simulation techniques and statistics, and whether or not the use of more pieces of debris would refine their results.

The researchers assessed the differences in using the methods of forward- and backward-tracking in time.

The path of an object can be traced back in time or can be predicted.

“These can be minimised by simulating sufficient numbers of virtual objects.”

In the case of MH370, the team also extended their initial analysis, which was based solely on the flaperon found on La Réunion in 2015, to also include other items of debris that were recovered in other locations.

Despite considering these other wreckage parts, the crash area could still not be refined.

When considering the maximum range of flight MH370 and a 550 km swath on either side of the arc “the most probable region for the crash site around the Arc lies between 30–35°S and 80–95°E. ”

But Dr Durgadoo cautioned: “We note in particular that the area searched by the Australian Transport Safety Bureau overlaps with the region of highest probabilities that intersects the arc.

“At the time of writing, metadata was not available from the 2018 Ocean Infinity search, which extends to 25°S.”

Professor Dr Arne Biastoch at GEOMAR said: “Unfortunately, no further information is available to us.

“Our current estimations suggest that, with at least five items of debris, an optimal area for the most probable crash-site region can be achieved.”

While there is very little hope for new information on the drift characteristics of MH370 debris Dr Durgadoo said: “The exercise of estimating the surface drift of debris from MH370 has led to an improved preparedness for future applications”.

The study was published in the Journal of Operational Oceanography.