"We were absolutely distraught. We pleaded and pleaded with them not to do it, but their mind was made up. That tree was coming down." 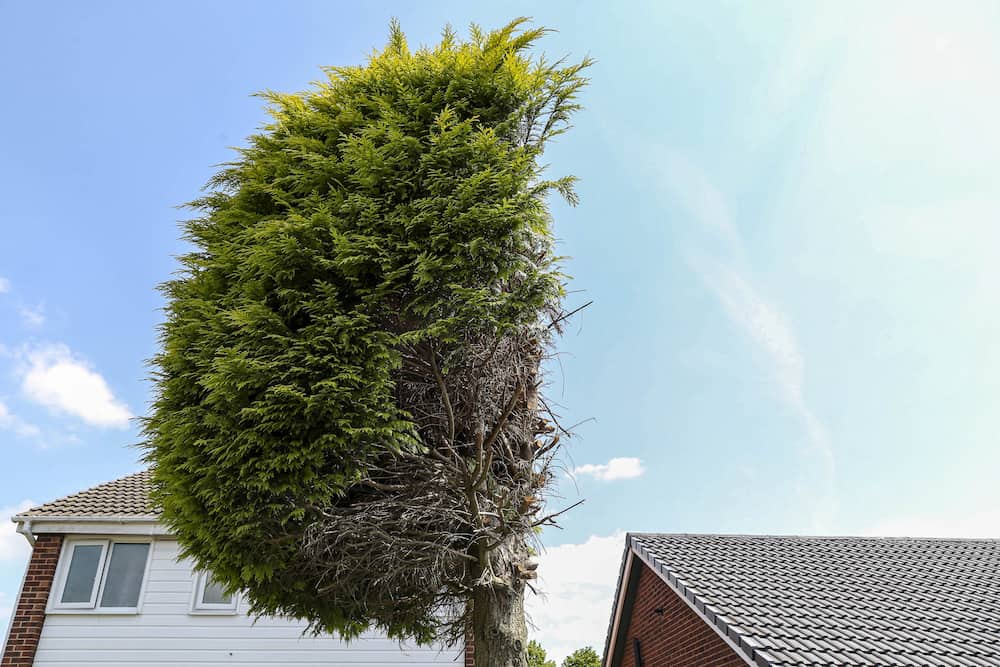 This hilarious photo shows a tree which has become a “tourist attraction” after it was chopped in half as a result of a “petty” dispute between neighbours.

Bharat Mistry, 56, and his family were “gutted” when his next door neighbours called in tree surgeons to cut half the branches of the 16ft tall Fir Tree that had stood for 25 years.

The drastic action came after a year-long dispute between Mr Mistry and neighbours Graham and Irene Lee, both in their 70s, in the leafy Sheffield suburb of Waterthorpe.

He claimed Mr and Mrs Lee had complained birds in the tree were making too much noise and making a mess of the drive of his bungalow in Brier Close, a quiet cul-de-sac where houses sell for between £160,000 and £220,000.

Pictures of the tree have gone viral and turned into memes on social media.

And it has become a site of curiosity as locals have walked past to get a good look at the tree.

Mr Mistry, a project manager, said: “It has been there for 25 years and we’d trimmed into a ball shape with agreement with the neighbour and he has been fine about it.

“But recently there have been birds in the tree which you would expect at this time of the year.

“He started off by putting black bin liners in the tree to stop the birds sitting there.

“Last weekend he said he was going to get a tree surgeon to cut it down and we asked him not to but they came on Friday and did it.”

Mr Mistry and his family watched on in horror as a team of tree surgeons hacked away at their beloved Fir Tree, which had been part of their lawn for a quarter of a century.

He added: “We were absolutely distraught. We pleaded and pleaded with them not to do it, but their mind was made up. That tree was coming down.

“I believe he has the right to cut down anything that is overhanging onto his property.
“But you have to ask, why after 25 years would you do that?

“It must have been no more than 3ft onto his land.

“It is above head height, the bottom of the branches start at about 8ft high and we have cut off the branches lower down to be amiable with them.

“He can get his car on and off the drive with no issues.

“We had asked if we could get it trimmed back and put a net in it so it would stop birds getting in, but there was no compromise with them.”

Mr Mistry, who lives in the three-bedroom detached property with his wife and two daughters, said the neighbours had gone on “perfectly fine” until lockdown.

He claimed Mr Lee first started to complain about the trees last March and things came to a head last week.

He added: “I haven’t spoken to him since they cut it down.

“We have never had any issues with them before this, we got on fine. Our children would play with their grandchildren when they were younger, we’ve always got on.

“He started complaining about the birds making noise, but my daughter sleeps in the front bedroom and she can’t hear anything.

“He tried to say they have made a mess of his drive but he parks his car there and I haven’t seen any evidence of that on his car.

“The weekend before last they said they were getting a tree surgeon to chop it down and they came out on Friday to do it.

“He used to bring the bins in for us, it’s such a shame it has come to this.

“It is really sad to look at, because the tree has been there for so long and it’s a really pretty tree.”

The photograph was anonymously sent into Jeremy Vine’s Channel 5 tv show and has since turned into a meme on social media.

Mr Mistry added: “We’ve had a lot of people walking past to look at it, people you can just tell have come out of their way to walk their dog on a different route to have a look.

“People have stopped to take pictures, there has been a lot posted on social media.

“You think we’d probably do the same if it was another house, but it does feel a bit like an invasion of privacy.”

Mr and Mrs Lee declined to speak when approached for comment yesterday.