Dad-of-two Adam Tranter built a public garden on the back of a truck after flowerbeds were removed because they "aren't a vehicle". 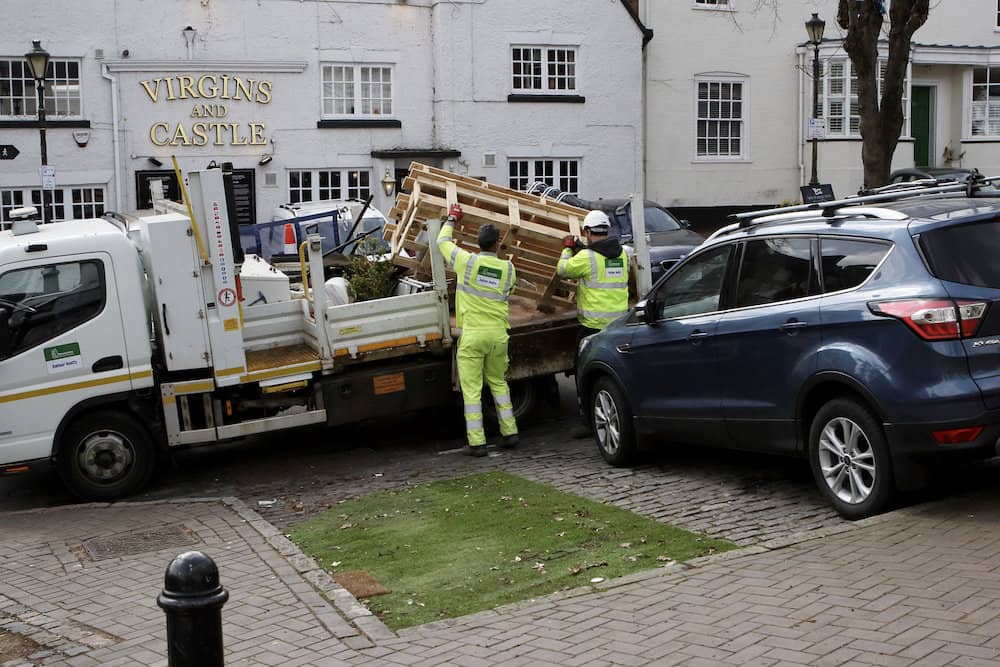 The old park being removed. Credit;SWNS

Council killjoys removed flowerbeds volunteers installed in a car park because they aren’t a vehicle – so locals responded by planting the public garden on the back of a truck and driving it back.

Dad-of-two Adam Tranter, 31, built the ‘parklet’ in a parking space on the high street last year to cheer up locals and help businesses.

The mini-park filled just one space in the car park on the high street in Kenilworth, Warwickshire, and included flowerbeds, grass, chairs, benches and bunting.

But council workers tore it down and carted it off on the back of a van – claiming he needed a “pavement licence” .

So Adam and his neighbours responded by buying a second hand truck, building a public garden on the back – and parking it back on the space.

The “park on wheels” is registered, taxed and insured – and has a parking permit.

Marketing boss Adam said: “I never stopped thinking about how we could find another way to make a community space after the ‘parklet’ was removed.

“It cost more than the first one as I bought a second-hand van, but it was something I really wanted to do so it wasn’t about the money.

“Towns should be places for people to meet and have a chat and enjoy their local area and I’m very passionate about public spaces for that reason.

“Since we parked it up, the response both online and in the area has been overwhelmingly positive – people seem to really love it.

“Fingers crossed this one is here to stay.

“A car using the space to park might make one person happy – but this can make hundreds happy”.

Adam and friends built the mini park on the space in September last year after seeing them online in other towns.

But it was carted off by Warwickshire County Council in April.

Adam said he was told by residents of the area it was prompted by a single complaint.

Along with friends – Ray Grilli, Chris Barrett and Simon Redfearn – he transformed a 1970 Piaggio Ape van he bought on eBay for around £4,000.

The father to twin seven-year-old boys with wife Aurélie Tranter, drove up his new ‘parklet’ on Monday (21).

Adam said he hopes this time will be different.

He said: “We wanted to find a way to bring the original idea back, but in a way that means it can stay for good.

“If the only way to make a bit of community space on your local high street is to put it on the back of a van, then so be it.

“It was only small, but our original parklet was a real gem of the town – everyone seemed to really appreciate it and it was good for local businesses too.

“That’s why we wanted to bring it back.”

In April, when the original park was removed by Warwickshire County Council, a spokesperson said: “The parklet on High Street, Kenilworth was removed, as it has not had a Pavement licence granted, or applied for, and we cannot determine its owner.

“In addition to the lack of licence, we also have concerns around the safety of anyone using the parklet, given its positioning within a parking area, without any form of barrier between people and live traffic.

“As the parklet was placed on the highway, Warwickshire County Council as the Highway Authority arranged for its removal.”

Warwickshire County Council is yet to respond to an updated request for comment.