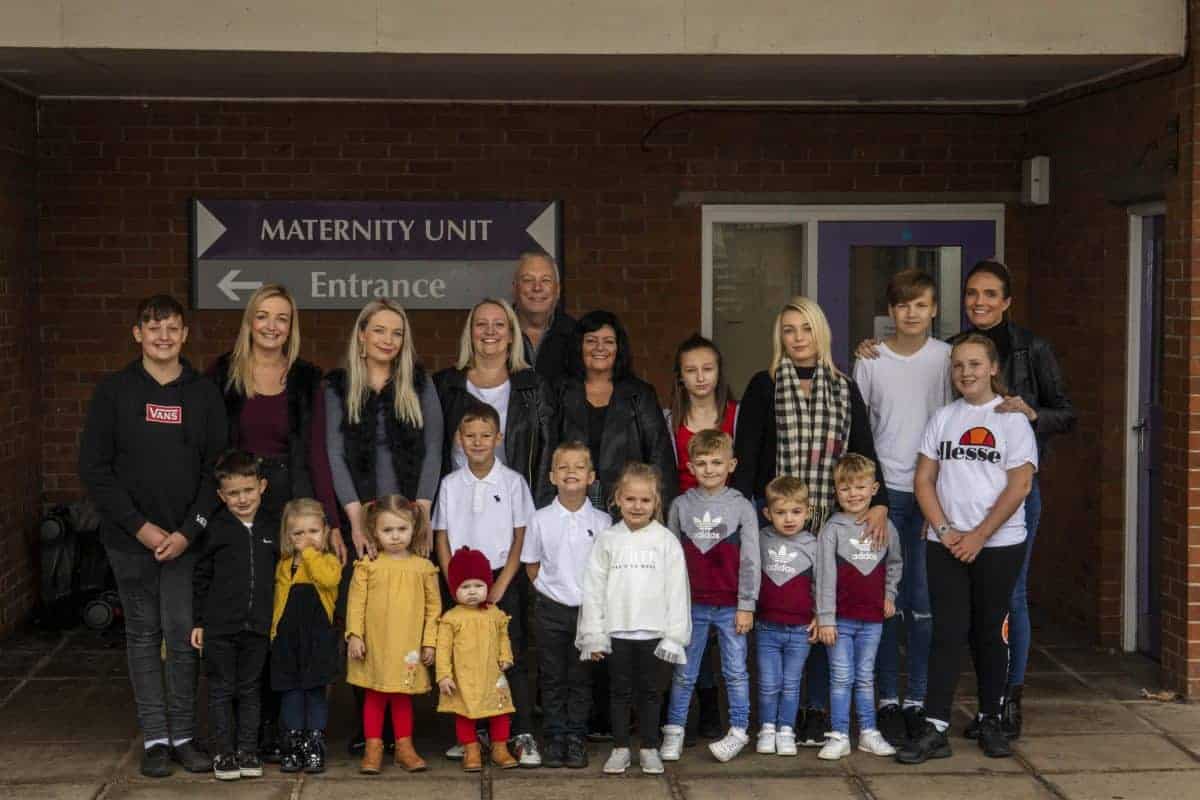 Meet the NH-US…..Nurse parents with five kids who all work for the NHS and had 14 children – all born at the same hospital where their grandparents trained.

Jacqui, 59, met Alan, 60, when the two were completing medical placements at Musgrove Park Hospital in Taunton, Somerset, as part of their nursing training in 1978.

And a couple of years later, Jacqui found out she was pregnant with eldest daughter Kate – whilst she was working on the maternity ward at the hospital.

Since then, Musgrove Park Hospital has become like a second home to the Chedzoy family.

All five of Jacqui and Alan’s daughters, and all 14 of their grandchildren, were born there.

And of the five siblings, only Emilie, 32, has gone on to not work at Musgrove Park – but still works for NHS England, as a neonatal screening administrator.

Musgrove Park Hospital discovered the Chedzoys remarkable link to the hospital when they launched their ‘Musgrove Babies’ campaign.

‘Musgrove Babies’, run by the hospital’s charity Love Musgrove, is awarding certificates to babies born at the hospital, to celebrate them and share pride in the care provided.

She said: “The hospital has been quite central to all our lives. We’ve all seen it grow and develop and change.

“All of us are so close, so as soon as one of our sisters has had a baby over the years, the whole family goes in to visit.

“I’m sure there are nurses in the hospital who have thought, ‘Oh, not again’, when they see that one of the Chedzoy siblings is about to have a baby,” she joked.

“You could probably ask anyone in Taunton, and they’d know one of the Chedzoy family.”

Three of Kate’s siblings also work at Musgrove Park Hospital, in either a full-time or part-time capacity.

Hannah, 36, and Hayley 33, both work at Pyrland ward, a mental health ward for the elderly.

The 14 cousins all appear to be close friends, with older children Joshua, Poppy, and Kameron looking out for their younger cousins, and the younger cousins meeting up for regular play dates.

Kate said: “We’re all based in central Taunton and are very close as a family. All the cousins have play dates together often.

“We all go round to our mum’s house just after Christmas each year, and at Easter the kids will do Easter Egg hunts together.”

She recalled a funny occassion a few years ago when two of her nieces and one nephew – Beatrix, Zachary, and Hildi – were born within three weeks of each other over the Christmas period.

Her three sisters Hayley, Jade, and Emilie were all on the maternity ward at the same time – and Kate and their mum Jacqui were hopping between beds.

“I wasn’t actually the on-duty nurse for any of the births,” Kate said.

“But I was hopping in on my breaks to check on my sisters, and just by chance I saw Beatrix and Zachary being born.

“Then when Hildi was born a couple of weeks later, she initially needed to be brought down to the Neonatal Intensive Care Unit where I work, while I was on shift.

“So I saw her just after her birth, too,” Kate said.

And Jacqui, who has worked for the NHS for 42 years, added: “I think I confused the doctors a bit, going from one bed to the other while they were all on the anti-natal ward.

“It was also funny with the three of them being in over the Christmas period, I was coming in with Christmas decorations, and stockings to hang off the end of their hospital beds.”

“It is quite special, that all of our grandchildren have been born at that hospital,” Jacqui added.

“The maternity ward hasn’t changed at all since Kate was born here.”

And grandfather Alan said: “I am proud that all of my daughters ended up working for the NHS.

“I have been to the majority of my grandchildren’s births. I’ve been to so many now that I’ve started bringing a newspaper along,” he joked.

But the couple say they didn’t actively encourage their daughters to work for the NHS.

Jacqui said: “When they were younger, I did try to steer them away a bit from becoming nurses.

“I tried to suggest that they might want to do something else, where they could earn more money.

“But Kate always wanted to be a nurse. I think it just runs in the family.”

And Kate agreed, saying: “The NHS has been part of our lives from the beginning.”

To make matters more extraordinary, a woman called Margaret Welstead who works as a maternity healthcare assistant at Musgrove Park, has been on shift at the hospital for every one of the 19 Chedzoy births.

Jacqui said: “Margaret always used to say she could spot a Chedzoy baby before she was even told which one it was.

“Back then, when I had my girls, the babies used to be taken away to a nursery in the hospital after being born, so the mums could rest.

“Margaret used to come on duty and the first thing she would do is visit the nursery.

“She said she knew which one was the Chedzoy baby before she looked at the names on the cots.”

Kate added: “Margaret has seen quite a few of us being born. She wasn’t always there for the births, but she’s seen me and my sisters all have our babies.

“She also worked as a playtime and lunchtime supervisor at North Town Primary School when me and my sisters were there.”

Today, Jacqui and Alan are thinking about winding down their nursing careers – but Jacqui has just registered on the bank staff at Musgrove Park Hospital, as a ‘cover nurse’ for any sicknesses or absence.

“I wanted to finish my career where I started it,” she said.

And it doesn’t look like the Chedzoys link to the NHS, or Musgrove Park Hospital, is due to end any time soon.

Hannah’s two children, 15-year-old Joshua and 12-year-old Poppy, both want to become doctors in the future, with Poppy wanting to work as an RAF medic.

Joshua, who has just started Year 10, said: “I think it probably is to do with the family, but it’s something I’ve always wanted to do anyway.”

Hayley Peters, chief nurse at Musgrove Park Hospital, said: “To see so many members of one family come together to celebrate the care they received on our maternity ward is simply wonderful.

“To know that they have also chosen to work in the NHS and within Somerset too makes their story even more inspiring.

“Kate, her parents, and her sisters are all brilliant advocates for nursing, highlighting the pride they have in their own workplaces as somewhere they have received care as a patient.

“We are very lucky to have them,” she added.

So far, more than 1,000 ‘Musgrove Babies’ have come forward to claim their certificates.

To find out more about Love Musgrove, visit: https://www.lovemusgrove.org.uk/.