“People must stop focusing on the symptoms of hate. We’ve got to treat it down to the bone, which is ignorance."

by Oliver Murphy
in Must Reads 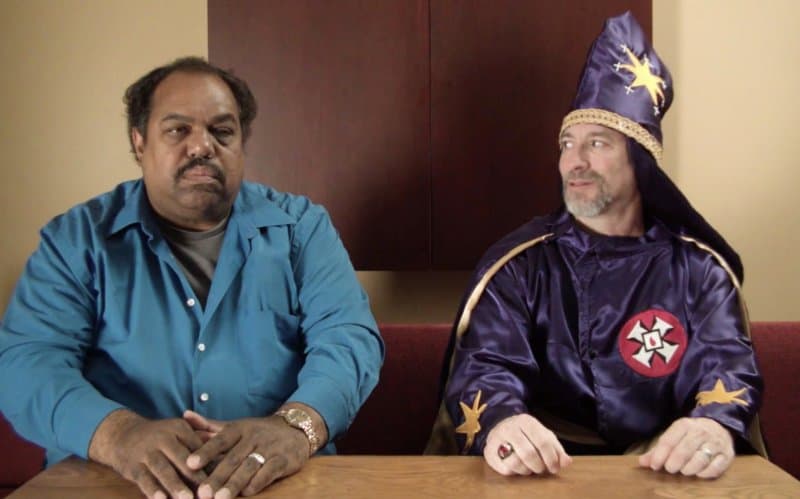 He’s played with the likes of Chuck Berry, BB King and even Bill Clinton, but how does an accomplished Black musician go from playing jazz and blues to befriending members of the Ku Klux Klan?

For more than 30 years, Daryl Davis, 63, has met with more than 200 members of the Klan, and other white supremacists, in search of an answer to a question that has come to define the course of his life: “How can you hate me if you do not know me?”

The author of Klan-destine Relationships: A Black Man’s Odyssey in the Ku Klux Klan, Davis’s remarkable work has proved that civil dialogue and compassion are vital components in the fight against racism, demonstrating that even those who hate you can eventually become your friends.

Even so, why would an African-American want to meet with members of an organisation who actively promotes hatred based purely on the colour of his skin? For Davis, it’s important to look back at a critical time in his childhood.

Born to parents who worked for the State Department’s Foreign Service, Davis would regularly travel to different parts of the world. Combined with his travels as a child and as a professional musician, he has visited a whopping 57 countries.

“I’ve been exposed to a multitude of cultures, ethnicities, religions, and all of that has shaped my perspectives and who I have become,” he explains.

“Back when I was growing up we did not have the amount of diversity that I had experienced overseas. There were just black and white kids. So, I was not accustomed to racism, I knew nothing about it.”

After a childhood spent predominantly abroad, educated at international schools attended by people of many races and ethnicities, Davis, at the age of ten, moved to a suburb of Boston, Massachusetts, where he would come to be one of only two black children in his school.

It was at this time, that Davis’s journey to seek the answer to his question began.

During a cub scout parade, he experienced what he would come to remember as his first bitter dose of racial hatred. As he marched proudly gripping the American standard, a group of white Americans began to throw rocks and bottles at him, inflicting injury after injury.

When his parents sat him down and told them that his experience was because of the colour of his skin, Davis was “baffled.”

“I could not get my head around the idea that somebody who did not know me, who had never spoken to me, would want to hurt me for no other reason than the colour of my skin. The people on the sidewalk who were throwing rocks at me did not look any different to my white friends,” he says.

“When my parents told me it had to do with the colour of my skin, I was unable to process what my parents were telling me. Especially as I already had experience with people of white skin colour who had treated me very well.

“I formed the question in my mind at 10: how can you hate me if you do not know me?” But despite reading a range of books on racism, Davis could not find the answers he had been yearning for.

“For the last 52 years I’ve been searching for the answer. So I figured: who better to ask than somebody who would go so far as to join an organisation whose whole premise is practicing hating people who don’t look like them.”

Davis’s first encounter would be one that changed his entire outlook. After having finished playing a set in an all-white country band, he was met by an individual who praised him on his performance.

What began as a conversation soon developed into a bombshell moment: unbeknown to Davis, the man who had just complimented him admitted to being a member of the Ku Klux Klan.

This revelation was an important moment – for it would come to mark the start of Davis’s quest to locate the source of racial hatred.

As the years passed, Davis encountered more and more Klan members. They would listen to his performances and speak with his regularly until eventually, after more than 30 years, more than 200 had disavowed their allegiances.

One such member was Roger Kelly, the Grand Dragon of the Klan in Maryland. Kelly, who would go on to become Imperial Wizard, was just one of many who quit the Klan, and as a token, gave his robe to Davis in a gesture of friendship. In-fact, Kelly became so close to Davis, that he would be asked to become his daughter’s godfather.

But why was Davis so willing to befriend a group he knew would hate him at first?

“Because I knew they were wrong,” he continues. “I knew they had not seen the things I had seen. It’s impossible to try to explain something to somebody when they haven’t experienced it.

“I consider racism to be somewhat of a mental illness,” he adds. “I’m not a psychologist, but I believe there are a lot of flaws in what constitutes a mental illness – has racism been defined as a mental illness? No. Because if they did, half of America would be institutionalised,” he jokes.

“Racism has to be addressed”

“You don’t make fun of or ignore those that have a mental deficiency. And this has become my mission – to convince people that to sit down and talk will prove that what they believe is not the way it is. And it has worked – my conversations with them enabled them to see the humanity in me.

“It also enabled me to see the humanity in them. Not everybody, but plenty of these people are good people – they just have a twisted sense of superiority and that it is a learned behaviour. You’re not born like that, it is learned from someone else – if something is learned, it can be unlearned.”

“These people are so used to being combative, especially with someone they oppose like me. Most people who I have sat down and talked with have told me openly that black people are inferior because we are prone to crime,” he adds.

“Well, I’m sitting there and I’m listening to this, and that’s throwing them off their game because they would expect me to fight – but I’m saying tell me more, I’m interested in this. When they get done, they’re exhausted. They go home and realise they’ve just had a conversation with a black man – someone they hate. And now they have to question their own thinking.”

I plant a seed

While many have praised Davis for converting these men, he was keen to tell me that he didn’t convert them directly.

“I am simply the impetus for those people leaving their ideology. But what I do is plant a seed. I nourish that seed and give them food for thought. Then they think about it and they come up with their own conclusion and then they convert themselves.”

Davis has recently joined forces with Minds.com and hopes to be able to help individuals approach opposing perspectives with civil conversation.

“We fear things that we don’t understand; of which we are ignorant. If we do not address the fear of whatever it is we are ignorant of, it will escalate and then it turns into hatred. If we don’t address that hatred and keep it in check then hatred in turn will escalate and breed destruction. We want to destroy the things we hate, because we fear them.

“People must stop focusing on the symptoms of hate, that’s like putting a Band-Aid on cancer,” he says. “We’ve got to treat it down to the bone, which is ignorance.

Related: Seeking escapism in Serie A