Italian football represents all the things I miss most about life before, on an almost-comically exaggerated scale.

by Henry Goodwin
in Football, Sport 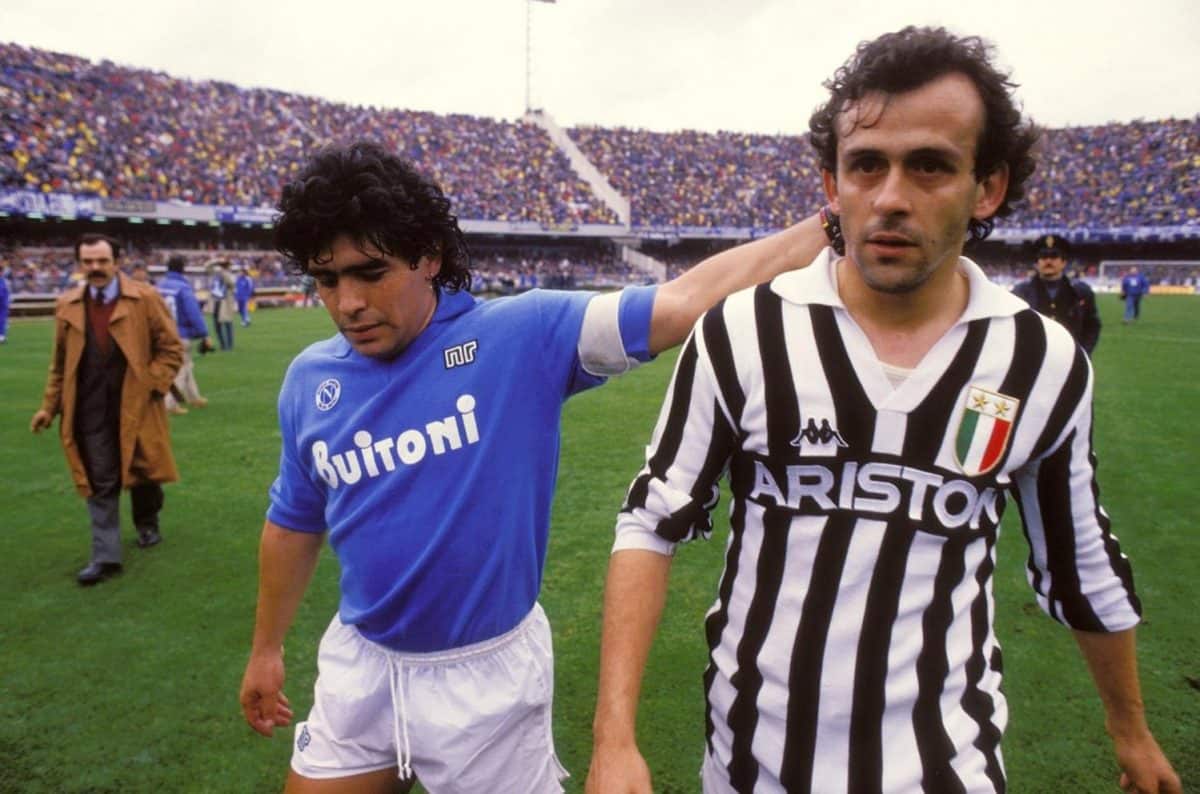 We all have our lockdown obsessions. For some, it’s sourdough. For me, it’s Serie A.

In the past few weeks I have changed the backgrounds on my phone and my laptop to two different photographs from the day Diego Maradona’s Napoli won its first Scudetto, in 1987.

In one – on my phone – Diego is leaving the pitch surrounded by security, a broad grin hinting at the celebrations to come. In the other, twenty-or-so Neapolitans are sitting on an old Fiat painted in the colours of the Tricolore, waving flags and scarves.

I’ve wasted hours scouring dark recesses of the web seeking out retro replica kits from the nineties, eventually settling on Cagliari’s 1994/95 home strip largely due to is sponsor: Pecorino Sardo, a crumbly sheep’s cheese unique to Sardinia. It arrived five days ago, and I have worn it for five days straight.

I’ve watched endless videos of iconic goals, like Antonio Cassano’s first in Serie A – for Bari versus Inter in 1999. The 17-year-old Cassano sprints beyond the Inter backline, takes down a long ball with his heel, nods it on, cuts inside two defenders and slides the ball in at the near post.

“ANTONIO… CASSANO,” the commentator roars. “Che goal, che goal.” What a goal, what a goal.

I spent one afternoon Googling the price of a Lazio season ticket, wondering whether my wages would stretch to pay for weekly roundtrips to Italy. They would not, I sadly concluded.

Part of my obsession is nostalgia for time I’ve spent in Italy. The food, the language, the weather and so on. But, most of all, I think it is because Italian football represents all the things I miss most about life before, on an almost-comically exaggerated scale.

I was in Florence when the captain of Fiorentina, Davide Astori, died suddenly in his hotel room in Udine, the night before a match.

Astori’s funeral took place in Basilica di Santa Croce, a fourteenth century cathedral where Michelangelo, Galileo and Machiavelli are buried. Outside a statue of the most famous Florentine, Dante Alighieri, peers out across a huge piazza that usually hums with tourists enjoying an overpriced spritz.

Each June, Piazza Santa Croce is transformed into a giant sandpit and plays host to Calcio Storico – ‘historic football’ – in which burly, shirtless men representing the city’s four quarters kick the shit out of each other in a game that’s like a cross between football and rugby while thousands of Florentines eat tripe and drink beer.

On the day of Astori’s funeral the piazza was filled by 8,000 purple-clad Fiorentina fans who, on a Sunday afternoon, are riotously loud. Today though, the square was silent, the quiet only broken by appreciative applause whenever players or coaches from rival clubs – even those from hated Juventus – entered the church to pay their respects.

The silence only ended when Astori was carried out of the cathedral. A roar went up, the crowd chanted and let off flares. “Davide is one of us,” they sung over-and-over. Hours later, sitting in my flat a couple of miles from Santa Croce, I could still hear their singing floating on the breeze.

Next, the drama. All sport is theatre, of course, but there is something so grandiose about it in Italy. If you were to send a critic to an Italian football game, they would no doubt report back that the protagonists were guilty of egregious overacting.

Take Roma’s absurd Champions League comeback against Barcelona at the Stadio Olimpico the season before last. It’s the 83rd minute and Kostas Manolas has just nodded in at the front post to put Roma 3-0 up, and pull them level at 4-4 on aggregate.

Manolas is, by anyone’s reckoning, an Adonis, with jet black hair slicked back either side of a parting and a carefully sculpted beard. But look at him now, if you can make out his face from beneath the mass of teammates and support staff who have swamped him on the touchline.

His face is stretched into a wide-eyed grimace, his eyebrows threatening to leap off his forehead, the tension in his jaw the only thing stopping him from collapsing into a heap of tears.

Daniele de Rossi, a lifelong Roma player and the club’s captain, has already done so, his face reddening as he marks a cross on his chest and looks skywards. Coach Eusebio Di Francesco, clad in black shirt, black tie and black jacket, is haring around in no particular direction, barking orders at nobody in particular.

Even the English commentators, less prone to hysteria than their Italian counterparts, lose all sense of perspective. “MANOLAS,” yells BT Sport’s Peter Drury. “A Greek from Mount Olympus who has come to the Seven Hills of Rome and pulled off a miracle!”  There are still eight minutes to play, for goodness sake.

Next, there’s the pandemonium of being in a large, unruly crowd.

When I was living in Florence, I went to the Studio Artemio Franchi to see Fiorentina take on Juventus. The Franchi’s exterior, like many Italian football stadiums, is imposing and concrete. It opened in 1931, and was originally named after a Florentine fascist called Giovanni Berta, who was stabbed by communists and thrown off a bridge into the Arno in 1924.

Once you’re inside, the stadium is beguiling. Beyond the sweeping Curva Fiesole you can see green Tuscan hills and little villages that look like they’re defying gravity.

I had a couple of friends visiting from London to come to the Juventus game, and I’d never sat in the Curva – where the ultras reside. We were a bit late, because I’d insisted we stop and buy purple scarves for the occasion, but made it in with five minutes till kick-off.

Feeling more English than I’ve ever felt in my life, we climbed up the concrete stairs until we found our row, and began pushing our way through throngs of fans towards our seats.

They were, of course, occupied. “Excuse me sir,” I said in my faltering Italian, “I think these are our seats.” He looked down his nose at me and shook his head. A woman from the row in front, taking pity, turned round and said: “This is the Curva. Sit where there’s space.”

Over the next two hours most of the Viola ultras didn’t bother watching the game. Instead they stood on handrails with their backs to the pitch, conducting the Curva like an orchestra, stinking of beer and cigarettes.

“Forza Viola,” we sang, “all throughout the week, I think only of you”. “Fuck off Bernadeschi, you son of a whore,” we shrieked whenever the flashy winger who had abandoned Florence for Turin touched the ball. Juve won 2-0.

The colour and passion of Italian football is thrown into even starker relief by this moment’s abject lack of either.

Going to a game feels like a vice, as if you’re pulling back the curtain and witnessing something primal. It is an assault on the senses, a shared shoulder-to-shoulder experience which currently feels desperately out of reach.

It is, in short, everything that lockdown is not.