“From everyone at the hospital, and across NHS Lanarkshire, I would like to extend our sincere condolences to Kirsty’s family.” 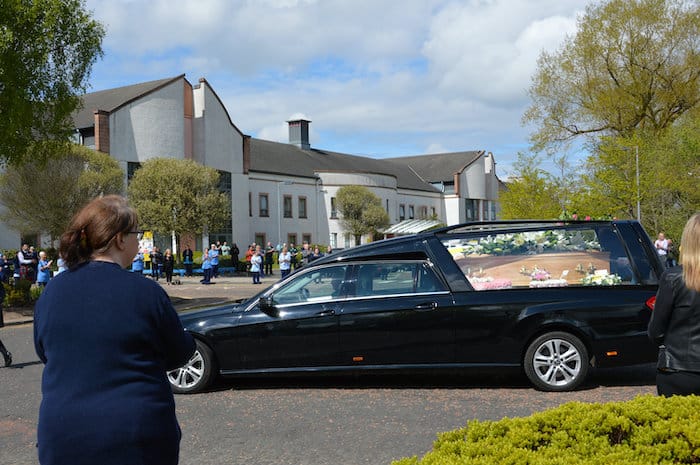 Medics applauded the funeral cortege of a mum-of-two who died from coronavirus – outside the hospital where she worked for two decades.

She had two young sons, Finlay, aged four, and Sam, 14, as well as widower Nigel.

The dedicated NHS worker started her career aged 17, and colleagues applauded a hearse as it passed by University Hospital Wishaw in Lanarkshire, where she worked.

The guard of honour was organised at the request of the family, as so few people could attend the funeral given current restrictions on public gatherings

Anne Leitch, chief of nursing services at University Hospital Wishaw, said: “This was a very fitting tribute to a much loved colleague and friend.

“It gave staff the chance to pay their last respects and showed the family how highly regarded Kirsty was.”

Staff from the hospital and other emergency services lined the main road in the hospital grounds to clap their hands as the procession passed by.

Anne added: “From everyone at the hospital, and across NHS Lanarkshire, I would like to extend our sincere condolences to Kirsty’s family.”

The majority of headteachers say reduced staff numbers, an inability to implement social distancing measures and a lack of PPE could make it hard for schools to reopen to more pupils.

The Government should improve its guidance on social distancing, and provide the scientific evidence for pupils returning to class, as “prerequisites” to schools reopening, heads say.

Parents will not have the confidence to send their children back to class if schools are not given enough time to prepare, the leader of the National Association of Head Teachers (NAHT) has warned.

More than one in four (29%) heads do not believe it will be possible to achieve some form of social distancing in primary schools, according to a survey shared with the PA news agency.

And fewer than one in 10 (9%) think it will be achievable with children aged seven and under, the poll by NAHT suggests.