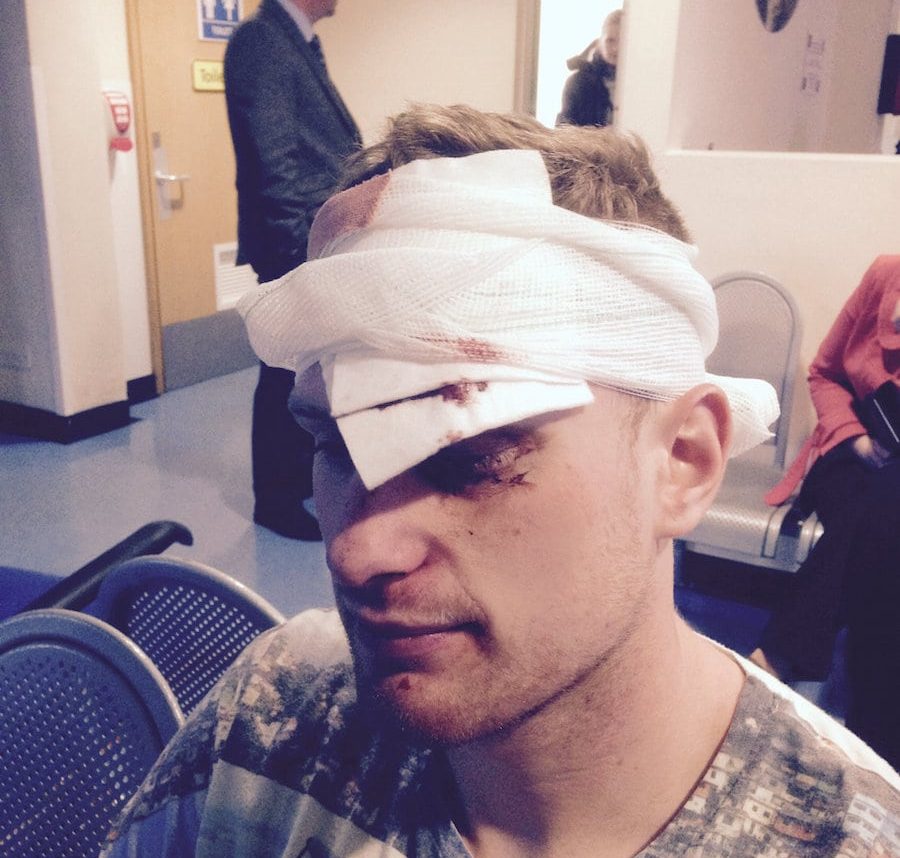 A Navy chef has launched legal action after he was seriously injured during a game – of BUBBLE FOOTBALL.

Matthew Palmer, 27, now has a metal plate in his skull and is scarred for life after the accident playing a game of British Bulldog while still in their bubbles.

The craze – which is also known as Zorb Football – has become a popular choice for stag and hen parties and team building events.

During matches players wear a large inflatable bubble with a hole in either end that goes over the head and ends at the waist.

But Matthew suffered a fractured skull when his opponent’s head came through the hole at the top of his bubble in the impromptu game of Bulldog.

He is still suffering more than two years later and is now bringing a personal injury claim against the organisers – Bubble Football South West Ltd.

Matthew, of Plymouth, Devon, said he wanted to warn others of the dangers – and called for helmets to be made compulsory.

He said: “I want others to know that it isn’t safe and hopefully I can prevent people from having to go through the same trauma that I have.”

While his game of actual football passed without any problems, Matthew says they were encouraged to play a game of British Bulldog, which is understood to be a common feature at the end of sessions.

This required them to stand in a circle and run towards the middle to knock their opponents over – the last one standing was the winner.

He added: “The football was okay but the British Bulldog was dangerous.

“We weren’t given a safety briefing on that at all – that part of the event should be banned or at least a risk assessment should be compulsory along with wearing a helmet.

“During the second round of British Bulldog, my friend and I were the last men standing.

“The instructor told us to return to the edge of the circle so we would have a big run up from about 20 metres away from each other and one of us would be guaranteed to fall.

“As you can imagine, we crashed into each other at quite some velocity when compared to the football, which was played at a sedate walking speed.

“I knew it was serious straight away. I was in agony – my head was cut, my nose was bleeding and my left eye severely swollen and sitting lower than my right eye.”

The incident took place in May 2015 when Matthew joined around 16 friends for a game at Devonport High School for Boys.

He now has a metal plate and four screws in his skull and scarring to his face and says his life continues to be blighted by headaches and concentration problems.

Matthew added: “Nobody called for an ambulance so my friends took me to A&E where a CT scan revealed a fractured skull, as well as air behind my eyeball that was pushing it out.

“A few weeks later I had an operation on my skull where a metal plate and four screws were inserted – all the metal work is still there and there is scarring to my face.

“I was told I could return to work in the July but I continued to get severe headaches and the Navy has downgraded me and put me on a recovery programme.

“This last two years have been a nightmare. 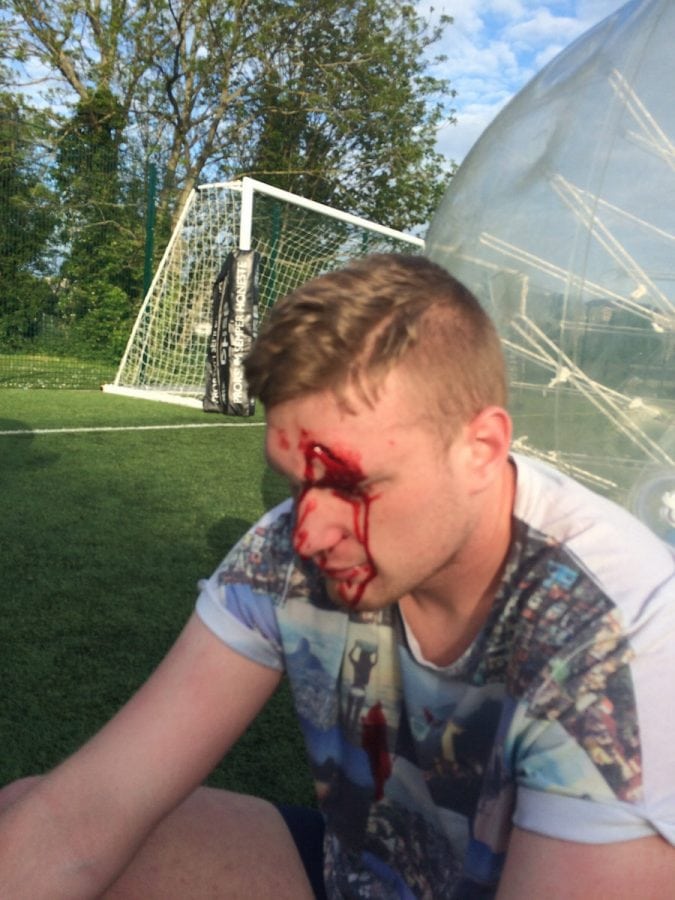 “My biggest problem currently is with my concentration and headaches, although I also suffered from dizziness and blurred vision – all from bubble football.”

He has launched legal action through Manchester-based Express Solicitors on the basis that while the bubble football was risked assessed, the more dangerous game of British Bulldog was not.

Associate Solicitor Jonathan Flattery said: “This accident has affected Matthew’s life hugely not only in terms of the injuries he’s sustained but also in the fact that two years later he is still suffering with his injuries which impacts significantly on his daily and working life.

“Bubble football is relatively slow and protected, but the faster and more competitive game of British Bulldog is not safe and it’s not what people signed up for.

“Being told to run at each other at speed, to knock each other over, goes against everything the organisers warned about in the football risk assessment, which says do not dive into each other.

“Despite the increased chance of significant injury occurring through the Bulldog activity, the organiser failed to take any additional or adequate steps to assess and minimise the risk of injury occurring.

“There was not enough thought for people’s safety in this much more dangerous activity and unfortunately Matthew has suffered serious injuries as a result.”

On its website Bubble Football South West Ltd describes itself as one of biggest companies of its type in the UK.

It said: “We pride ourselves on offering an unrivalled, safe and professional service whilst maximising the amount of fun you can have in a bubble.”

The company has been approached for comment regarding the legal claim.