By Wyndham Hacket Pain @WyndhamHP In the last couple of years, almost as a reaction to the overproduced and sickly Twilight franchise, there have been a number of vampire films that have reimagined the genre in a more realistic and creative way. With Jim Jarmusch’s Only Lover’s Left Alive and the more recent A Girl […] 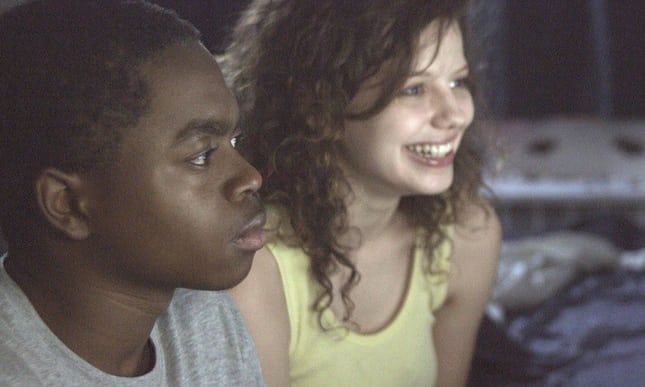 In the last couple of years, almost as a reaction to the overproduced and sickly Twilight franchise, there have been a number of vampire films that have reimagined the genre in a more realistic and creative way. With Jim Jarmusch’s Only Lover’s Left Alive and the more recent A Girl Walks Home Alone at Night the real potential of vampire tales has really been shown. Made on a low budget with relatively unknown actors, it is clear that The Transfiguration has more in common with these films than the mega-franchise.

Set in present day New York, the film centres around Milo (Eric Ruffin), a bullied teenager who has an apparent need to drink blood. He remarkably manages to leave a trail of corpses across one of the busiest cities in the world without even attracting police attention or suspicion. He finds friendship in fellow outsider Sophie (Chloe Levine) and as the urges to suck her blood becomes stronger he fears he will hurt the one friend he has.

The Transfiguration raises some interesting ideas but struggles to elaborate upon them. The link made between the young lead’s thirst for blood and his mother’s suicide raise compelling questions about the compulsion to suck blood and what drives this seemingly strange desire, but this observation never produces any real insight into Milo as a character. Similarly ideas of addiction in relation to vampires need for blood are mentioned but are left equally unexplored. The frustrating thing about this film is not that is lacking in ideas but that it is lacking in exposition.

This is not helped by some poor dialogue that is stunted and disconnected. The conversations are delivered exceptionally slowly with huge pauses between each sentence. This gives the sense that the story is not going anywhere. To compound this, for major portions of the film the characters exclusively talk about vampires and the merits of one depiction of them over another. It can be hard to engage with a discussion of the merits and limitations of Twilight and leads to many scenes feeling unnecessary. Even at a mere 97 minutes there is a feeling that it is longer than it needs to be.

The Transfiguration represents director Michael O’Shea’s first film and in many ways it shows. From the script and storytelling, to the camerawork and cinematography there are many elements that hold his debut back. With his second feature A Spectacle already showing at festivals it appears that O’Shea has a career in cinema and will be making more films in the future. He is clearly someone with interesting ideas and if he can only channel them into a better realised story he could easily produce a brilliant film in years to come.

The Transfiguration has enough interesting elements to suggest that director Michael O’Shea has a promising career ahead of him, but it is too inert, lifeless, and lacking in thematic exploration to suggest that he has really found his footing yet.

The Transfiguration is out on DVD and Blu ray from Monday 14th August.