The sheeting allowed the two octogenarians to embrace in a Barcelona nursing home. 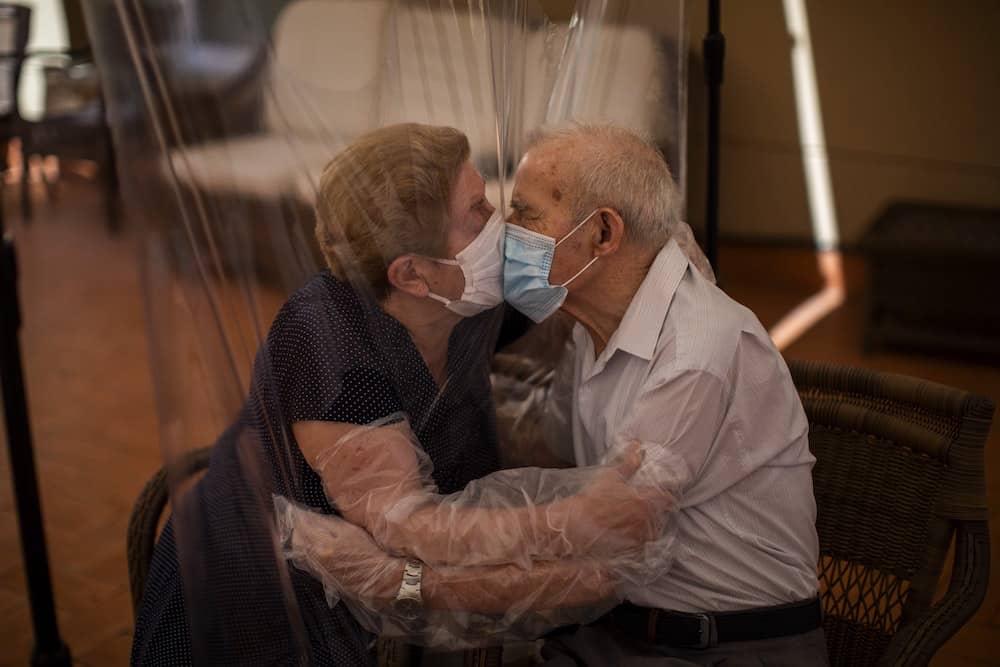 An elderly couple have shared a hug after 102 days apart during the coronavirus pandemic – thanks to plastic sheeting.

Eighty-one-year-old Agustina Canamero and her husband Pascual Perez, 84, were finally able to embrace through protective screens at a nursing home in Barcelona, one of the many such establishments that locked out visitors in a bid to shield residents from the deadly virus.

Ms Canamero stayed at the home she and Perez used to share during the lockdown.

During their 59 years of marriage, the couple had never spent so many days apart.

When the Ballesol Puig i Fabra nursing home allowed visits to resume with the addition of protective screens, Ms Canamero was among the first to arrive.

The husband and wife kissed through the thin layer of plastic, while both wore face masks.

The scenes of their tearful reunion were repeated several times throughout the day by others.

Beatriz Segura carefully put on long gloves before reaching her arms through two holes in the plastic film to hug her 96-year-old mother at Ballesol Puig i Fabra.

It was their first in-person encounter since March 15.

As members of the nursing home’s staff sobbed from a distance, mother and daughter spoke for a while.

Ms Segura said she was looking forward to take her mother, Isabel Lopez, out to eat at a restaurant. Ms Lopez replied that her first priority was getting to a beauty salon.

Dolores Reyes, 61, and her father, Jose Reyes, 87, also spent time together for the first time in nearly four months.

In their eagerness, they pulled down the screen while reaching for each other.

Representatives of Ballesol Puig i Fabra would not disclose how many residents had fallen ill with Covid-19 or died during the outbreak, citing an ongoing judicial investigation.

Spain’s nursing homes were hit particularly hard by the virus, which has exacted a nationwide death toll of at least 28,300.