The young female seal, called Flowerpot, was found on Horsey beach in Norfolk with a large plastic object around her neck which was clearly causing her pain. 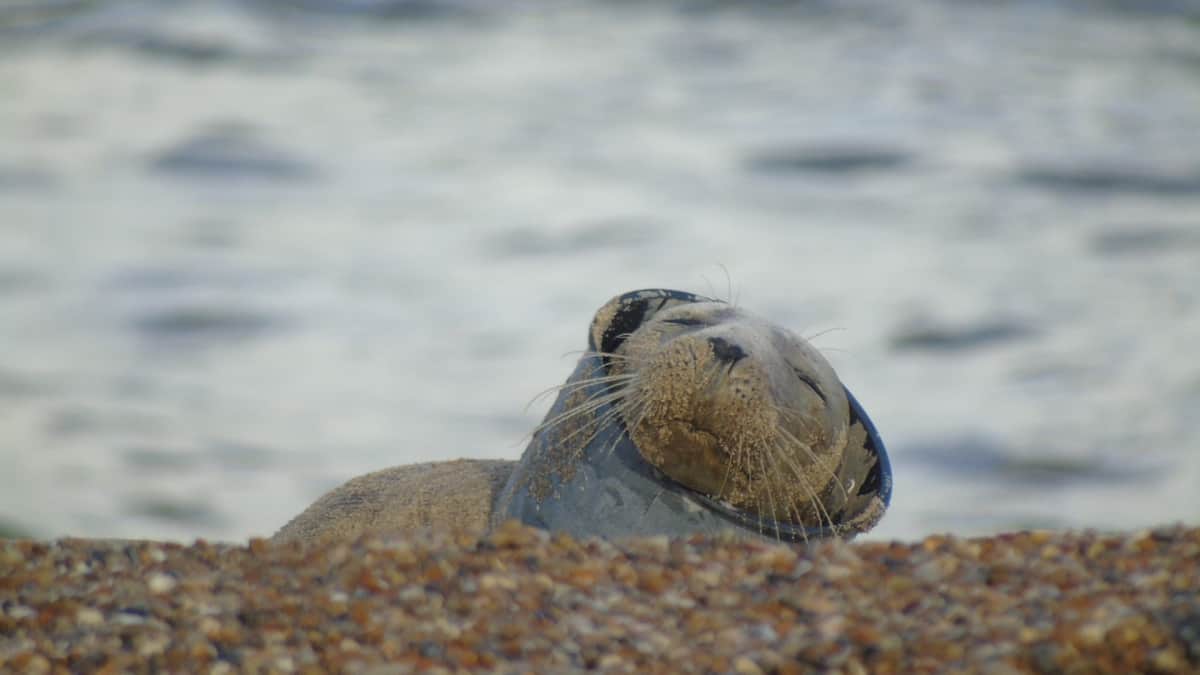 These heartbreaking photos show an injured seal who had a plastic object stuck round her neck and be rescued by RSPCA staff who cut her free using pliers.

The young female seal, called Flowerpot, was found on Horsey beach in Norfolk with a large plastic object around her neck which was clearly causing her pain.

Staff from RSPCA East Winch Wildlife Centre worked to cut the plastic object from the 65kg seal on Sunday 20 October.

After freeing the grey seal, staff had to treat the deep neck wound using antibiotics and daily salt baths.

The unknown object is made from plastic and is another example of man-made rubbish polluting our waters and causing injuries to wildlife.

Flowerpot is the ninth seal admitted to the centre so far this year with ‘necklace’ injuries caused by man-made rubbish left in our waters.

Alison Charles, East Winch centre manager, said: “Earlier this month we reached a heartbreaking milestone of admitting our 50th ‘necklace’ seal since 2008 – the month isn’t even over and now the number has sadly reached 51. It is upsetting and frustrating that these poor seals are being injured by man-made rubbish.

“The seals we have cared for over the years have been caught in a huge variety of items such as ghost netting, frisbee-type rings, a handle from a builder bulk bag and we even had to care for a seal trapped in what seemed to be a rope type net, similar to a potato bag.

“We are once again so grateful to the Friends of Horsey Seals for catching this poor girl. The object was cutting in deep to her neck and causing terrible injuries.

“Had she not been rescued, it is unlikely she would have survived with this stuck around her neck as it would have restricted her movement and made her vulnerable to predators and unable to hunt for herself.

“We don’t know what this object is or what it was used for – so would be interested to find out if anyone does know.”

Flowerpot is likely to be in RSPCA care for a number of months and she will require at least four 25kg bags of salt a day as part of her rehabilitation.

Each bag costs more than £13. Anyone who would like to help Flowerpot, can make a donation of a salt bag through the East Winch Amazon wish list: https://www.amazon.co.uk/gp/registry/wishlist/2QW97YL6JNRPQ/ref=pdp_new_wl

Or if you would like to donate towards the cost of this seal and others at the centre you can donate via https://www.justgiving.com/campaign/eastwinchseals

Do not attempt to capture or handle an injured seal. Seals can have a nasty bite so please keep other animals, such as pet dogs, away from the seal, and never try to return the seal to the water yourself.

For more information on what to do with injured wild animals, visit the RSPCA’s website at: https://www.rspca.org.uk/adviceandwelfare/wildlife/injuredanimals

To help the RSPCA continue rescuing, rehabilitating and rehoming animals in desperate need of care please visit our website.