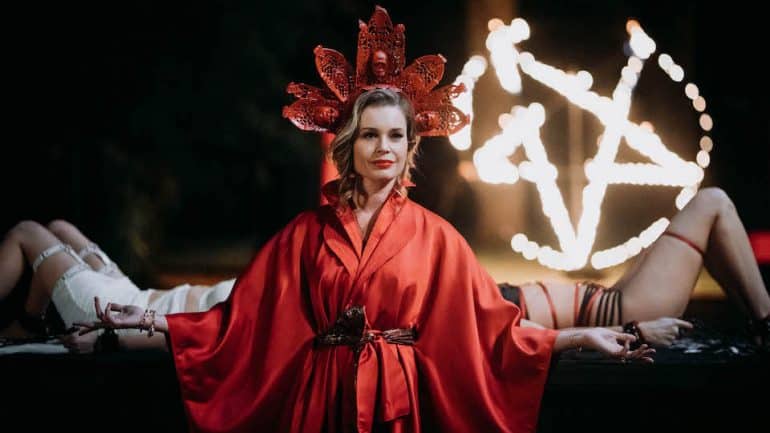 Horror movie fans desperate to get their stock in schlock may want to get their hands on Satanic Panic, a low budget horror satire on the American upper classes as well as an outright gore fest.

Harkening back to the 1980s when moral panic over imagined satanic rituals rocked the United States, pizza delivery girl Sam (Hayley Griffith) finds herself in an uber-posh neighbourhood, only to be targeted as the virgin this coven needs to complete their hell raising ritual.

Rebecca Romijn (the original Mystique from the X-Men franchise), is clearly having fun chewing up the scenery. Some of the prosthetics are really great, and the film is able to give some juxtaposition from rich to poor. Alas, a feeling throughout is that Satanic Panic has bitten off more than it can chew.

From here it is more a case of step forward and step back. Moments like the ‘killdo’ (a massive drill on a belt) are brilliant, others like a man accidentally shooting himself strained and unfunny. The standout performance may be from Ruby Modine as Judi, and a scene in which she and Sam are working desperately to stop a curse are a highlight of the film.

While there is room to cover in documenting the moments when America went collectively insane over a combination of paedophilia and Satanism, this isn’t a film that is prepared to look too deeply at them, instead focusing its satire more on tensions between generations and class.

If you’re willing to overlook the feeling of wobbliness that pervades Satanic Panic, there may be enough here for aficionados of gore, horror comedy and a classic final girl. Others may find the stretches of awkwardness and absurdity too much to take.

Satanic Panic is available on digital download fand on Blu-ray and DVD from Arrow Video.