A council is being sued by a tenant because he can’t do his washing – after 8PM. Steve Norman took action when the opening hours at a communal laundry in a housing development changed without notice. The facility, with two washing machines and two tumble dryers, had been open round the clock, seven days […] 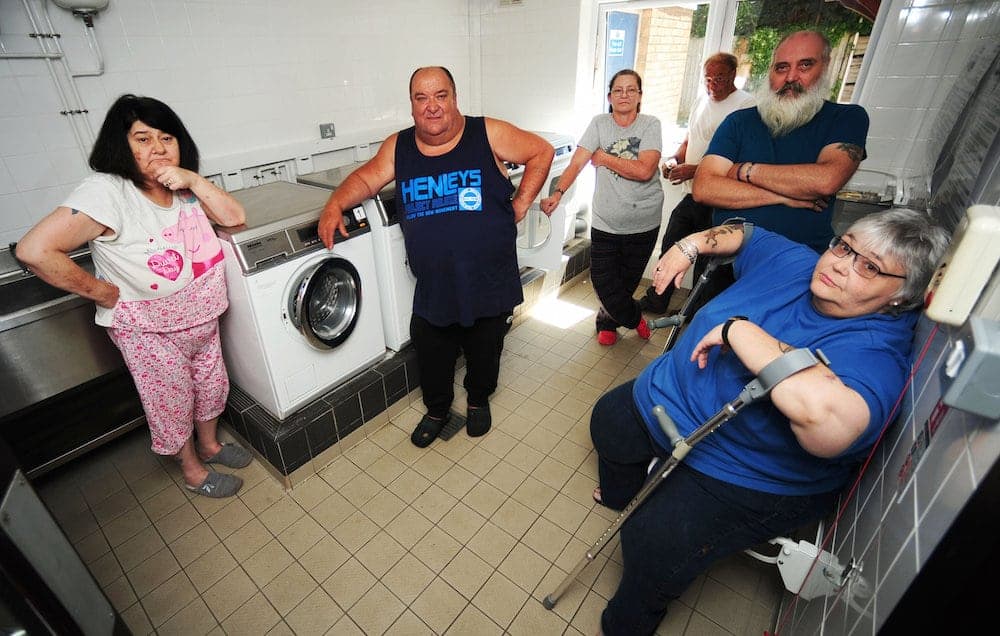 Local residents at Antona Court, Shirehampton, led by Steve Norman (centre). See SWNS story SWWASH; Council legal chiefs are embroiled in a bizarre legal battle after one of its council tenants sued them because they had stopped him washing his clothes after 8pm at night. Residents living in what is a former sheltered housing complex in Shirehampton share a communal laundry, a room which contains two washing machines and two tumble dryers.That room in Antona Court, in the shadow of the M5 approach to the Avonmouth Bridge, was always open whenever residents needed to go there, 24 hours a day.

A council is being sued by a tenant because he can’t do his washing – after 8PM.

Steve Norman took action when the opening hours at a communal laundry in a housing development changed without notice.

The facility, with two washing machines and two tumble dryers, had been open round the clock, seven days a week.

But in March a housing officer suddenly announced it was being closed overnight from 8pm to 8am and only open five days a week.

Residents at the site in Avonmouth, Bristol protested but that refused to wash with the council.

But local activist Steve looked up the law and said the authority had a statutory duty to consult with residents about any material change to the terms of their tenancy.

And he argued that restrictions to his ability to do his washing whenever he wanted was a major change.

He lodged papers at Bristol Civil Courts a couple of months ago, ordering Bristol City Council to pay him £1,000 damages and reinstate the 24/7 laundry.

The council offered no defence and his claim went unchallenged for a couple of months.

But then the council’s solicitors waded in and Steve, 59, had his day in court this week.

A judge ordered him and the authority to reach a negotiated settlement within the next two weeks.

If that doesn’t happen a date for a full hearing into the case will be scheduled for August.

Steve said: “What they’ve done is just out of order.

“Apart from the fact they did it with no notice – which they legally had to – it means a lot of inconvenience for people.

“This was a stealth cut, we pay for the service, it’s not free. It’s a 40 per cent cut to the service but no reduction in the charge.”

Steve said he likes to put a washing cycle on once a day and due to his busy schedule often does his laundry at midnight.

He added: “They’ve had since day dot to put this right. We are going into a courtroom and I am going to win.

“Our tenancy agreements are incorporate digital TV, cleaning services plus laundry – it’s all incorporated in the rent.

“This is a former sheltered housing complex, you’ve got lots of people with mental health problems, addiction problems, people with incontinence problems.

Steve, a self-confessed ‘gobshite’, has a history of taking the council to task over cuts.

He regularly stands in local elections as an independent candidate and once beat the Lib Dems.

“I’m on their case day in, day out,” he said. “This is the greatest joy of my life. I’m having the time of my life, winning is a bonus. Bring on the clowns.

“I want compensation for the loss, and the time and effort I have had to put in.”

Bristol City Council has been approached for a comment.

Watch: Why are PSG fans now BOOING Messi and Neymar?