Two dozy agency workers have been suspended after they were pictured appearing to be ASLEEP in the lounge of a care home. It is believed that the women, wearing their uniforms, napped for nearly three hours while they should have been looking after elderly people and dementia sufferers. One of the women is pictured […] 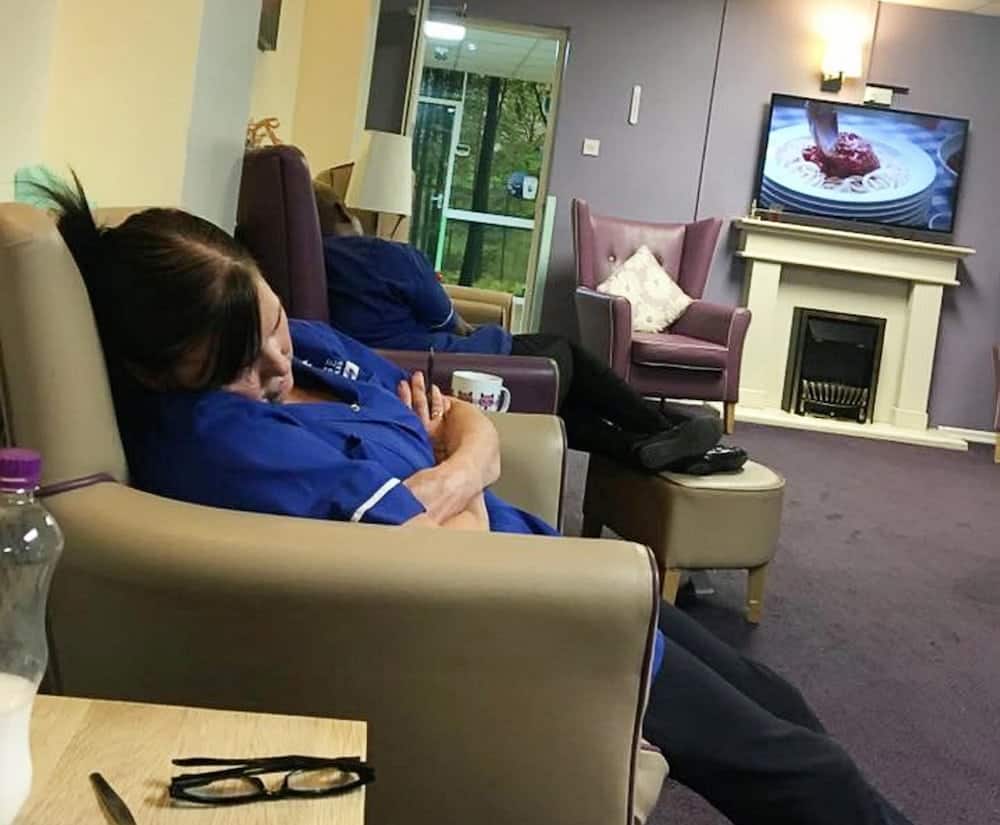 Two care home workers have been suspended and an investigation launched after a photograph appeared on social media of them appearing to be asleep. See NTI story NTICARE. The picture, posted on a Twitter account called "Good Carer" last week, was said to have been taken at the Westroyd Care Home in Shepshed. An investigation into the incident has now been launched by the home's owner, the agency who supplied the care workers, Leicestershire County Council's safeguarding service and the Care Quality Commission (CQC). The home is split into two units, the House and the Lodge. The House provides care for elderly people while the Lodge cares for people living with dementia.

Two dozy agency workers have been suspended after they were pictured appearing to be ASLEEP in the lounge of a care home.

It is believed that the women, wearing their uniforms, napped for nearly three hours while they should have been looking after elderly people and dementia sufferers.

One of the women is pictured with her feet up on a stool while the other is slumped in a chair with her head to the side.

The pair, who were working at Westroyd Care Home in Shepshed, Leics., were suspended after the image was shared on Twitter on June 26.

They were employed by Fosse Healthcare, an agency which provides nurses and healthcare assistants to hospitals and care homes in Leicestershire.

Tweets from the account which shared the extraordinary image said: “These two lazy sods are from #FosseHealthcare in #Leicester.”

The page also sent a message to the Care Quality Commission’s account, saying: “May we suggest U inspect #FosseHealthcare as they seem 2 be very unprofessional in their correspondence.

A spokesman for Four Seasons Health Care, which runs the home, said: “When we saw the photograph we notified the Leicestershire County Council safeguarding team and the CQC and instigated a joint investigation together with the care staffing agency, which is still ongoing.

“Meanwhile the agency workers in the photograph are suspended from working in the home.

“If any carer was napping while they should be looking after elderly residents, that would be a serious disciplinary matter.

“However, it would be wrong to make assumptions and the investigation needs to establish whether the people in the photograph were meant to be on duty at that time or were on a break and whether they were actually asleep.”

A spokesman for Fosse Healthcare said: “We were informed of a complaint against two members of Fosse’s staff regarding a shift at a Four Seasons Care Home on June 26. “As a result we have commenced a full review of the complaint, including interviewing the individuals involved.”

“We were informed of a complaint against two members of Fosse’s staff regarding a shift at a Four Seasons Care Home on June 26.

“As a result we have commenced a full review of the complaint, including interviewing the individuals involved.

“As a matter of policy the two members of staff were immediately suspended from work while we complete our review.”

Leicestershire County Council, which is responsible for the care of vulnerable adults, has also been informed on the incident.

A council spokesman added: “Clearly, this is a concern, and we are aware that the owners of the care home have taken immediate action.

“We will work closely with them and the CQC in ensuring the safety and well-being of residents, which is always our priority.”

Westroyd House Care Home is split into two sections, the House, which cares for elderly people, and the Lodge, which tends to people living with dementia.

A statement on the home’s website says: ” Westroyd is a purpose-built residential home for elderly people who are physically and mentally frail.

“We are especially trained in caring for those living with dementia.

“Our unique approach is based on understanding dementia form the resident’s perspective, enabling us to deliver Special Resident Experiences and consistently good care everywhere.

“Our highly trained team members specialise in palliative care and providing professional support to those living with dementia.”