Melanie MacLean, from Benbecula, Outer Hebrides, accidentally sold her pet lamb Norman, who she cared for when he was younger after he was born in poor health. 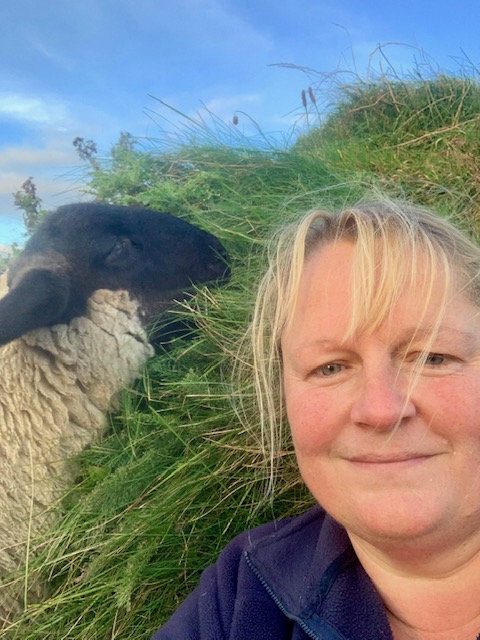 A crofter made a 540-mile round trip to save a lamb from slaughter – after she regretted selling him.

Melanie MacLean, 50, hand-reared pet lamb Norman after he was rejected by his mum when he was born in April.

The little lamb could have died had Melanie not intervened to watch over him for his first 48-hours of life.

Suffolk lamb Norman was picked up by farmers Irene, 66, and Jim Fowlie, 69, who purchased 600 sheep at the sale on September 2.

Norman was taken to their farm near Fraserburgh, Aberdeenshire but former policewoman Melanie couldn’t stop thinking about the beloved lamb.

And 24 days later Melanie decided she wanted him back, setting off on a 16 hour round trip from her remote croft to rescue Norman.

Arriving at the farm in Aberdeenshire farmer, Jim took Melanie to the 75 acre field where Norman was living with 700 other sheep.

But Melanie spotted the lamb right away and was stunned when Norman ran ‘like a bullet’ towards her after instantly recognising her.

Now back home with Norman, delighted Melanie said: “Norman was the smallest of a set of triplets.

“Sheep normally shouldn’t have more than two because they struggle to feed them.

“They have to have their mother’s milk within the first six hours or else they’ll die.

“He was very weak when he was born and couldn’t stand or lift his head.

“Under a heat lamp he gradually got better and as he got stronger I knew he’d be fine.

“He [Norman] was intentionally sold but I had such a dilemma.

“As I got to the market he went out with the others but he just stood beside me.

“There were other crofters there who swayed me and I had to make a decision.

“It’s quite a male environment and I just went with it.

“People were saying ‘don’t be silly, you’ll get over it’, but I instantly regretted it.

“This wee guy was totally different, he was like a dog to me.”

Melanie’s husband Allan, 57, told her to give herself a few weeks to get over the emotional parting, but she couldn’t forget about Norman.

Even while she celebrated her 50th birthday, she was still feeling bad about selling her special lamb.

Melanie said: “I thought if I gave myself a week or two I’d get over it but I didn’t.

“I was a little embarrassed about phoning Irene but I just had to bite the bullet.

“She’s a sheep breeder and I thought it might be weird for her to hear.

“I called her and explained the situation but she was like ‘don’t be silly’ and was instantly welcoming.

“I didn’t know what to expect but she was very understanding.”

Melanie arrived at the sheep farm on September 26 and said she ‘burst into tears’ during her emotional reunion with Norman.

She said: “I took my crofter’s jacket and a pink hat I used to wear all the time.

“We drove into the field and we were seeing all these white lambs everywhere.

“We drove past a few then after 20 or 30 seconds I spotted a round ear tag I had been using.

“He was lying down and then I stepped out and was going to shout, then he just stood up and ran like a bullet towards me.

“I just burst into tears.

“It was just complete relief and euphoria.

“She fell in love with him and couldn’t get over it.

“We’ll remember it for a long time – she was so grateful.”

Norman is now safe at home and is settling back into life on Melanie and Allan’s croft, where he will live out the rest of his days.

“He will stay with his father and keep him company from now on.”