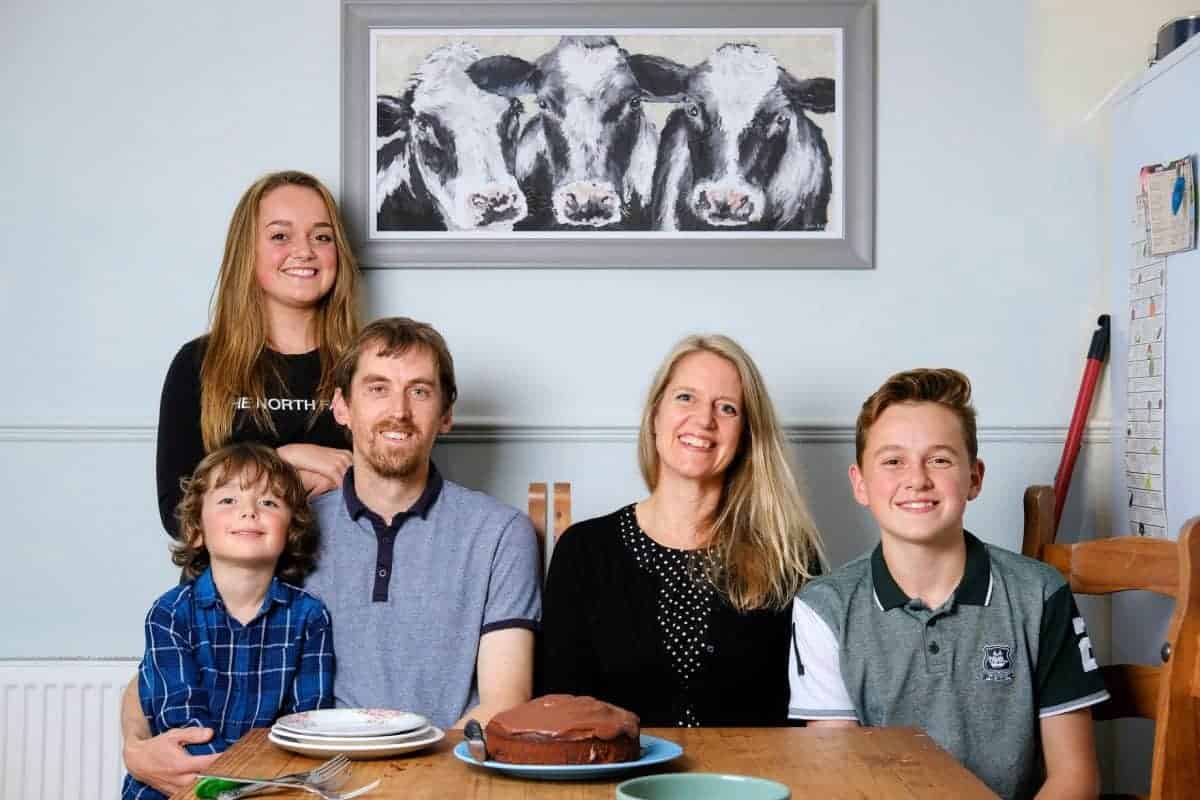 A family-of-five have spoken out about losing their friends being bullied – because they are all VEGAN.

Jacqui and Ryan Robins, and their three children Skye, 15, Skipp, 14, and Cadan, five, are all happily vegan, and enjoy a range of delicious meat- and dairy-free meals.

But the family have admitted that the transition to a vegan lifestyle has not been the easiest – and that they have lost friends over it, and are often met with hostility and aggression.

Jacqui, 44, who was just eight years old when she gave up meat, has said that other parents turn their backs on her when she goes to her children’s schools.

And Ryan, 37, has even had online trolls telling him his dietary choices are disrespectful to his late father – a “highly-respected” butcher.

Meanwhile, middle-child Skipp says he is targeted at school over his veganism, and regularly has meat waved in his face.

But despite this, the family, from Probus, Cornwall, passionately stands by their lifestyle – and is keen to put an end to the misconception that vegans are “militant” or “crazy”.

Nutrisionist Jacqui said: “Passion is misunderstood to be aggression or hatred.

“There seems to be some kind of divide where people meet vegans with aggression and resistance, when you are just trying to raise awareness about practices that people should know about.

“I know there are so many good, kind people making choices that they wouldn’t make if they knew the reality.”

It all began when Jacqui went vegetarian at eight years old – her own decision – after realising for the first time that animals went into her shepherd’s pie.

But two years ago, after watching ‘horrifying’ documentaries and researching the ‘reality’ of dairy-farming processes, the nutritionist mum-of-three decided to ditch dairy, too.

She said: “I saw a video that went into the reality of the dairy industry. I was horrified and straight away I didn’t want anything to do with the dairy products.

“I thought, if I couldn’t cope with watching it happen, but I was buying the product, I was inadvertently funding it.”

Her son Skipp soon followed suit, after watching 2017 documentary The Land of Hope and Glory with his mother – all about the UK’s farming practices.

Jacqui said: “All of the kids have made their own decisions and have recognised why they are vegan.

“Some parents say ‘you’re not having that and that’, but we wanted the kids to understand why we do it, take on the information and decide for themselves.”

For oldest child Skye, the transition took a little longer – because she was afraid to watch the documentaries.

But the teen said: “Once I watched them it was easy. I now want to know where my food has come from and how.”

Youngest sibling Cadan, five, was switched to vegan milk alternatives when he was younger, after initially being fed dairy milk and suffering a variety of digestive issues.

But his mum says: “Even Cadan understands exactly – he knows that the baby animals suffer and are taken from their mummies and he doesn’t believe in that.”

And as well as the immediate family, the Robins’ influence has encouraged Jacqui’s father John, 75, and his wife Sarah, to follow suit.

But for Jacqui’s husband Ryan the journey to veganism was very different – as he grew up surrounded by the farming industry, and was a frequent visitor to slaughterhouses.

He said: “Dad was a highly respected butcher and worked part-time on a farm and neighbours would bring animals around to be skinned and plucked.

“It wasn’t abnormal for me to be around dead animals for much of my life.

“I would help put animals on trailers and get the animals into the slaughterhouses and it was all normal to me.

“I witnessed chickens being killed on the farm, I worked on the turkey line just before Christmas and I always just thought ‘we need animals to be healthy and strong’.”

Ryan initially went vegan for health reasons – after his father passed away, and Jacqui’s mother was diagnosed with bowel cancer.

He said: “I wanted us and our family to live a life as healthy and as nutritiously as possible, so that we could live as long as possible.”

But now, his perspective on things have changed and he says his main reason is “helping to save the animals and saving the planet.”

The family are very open about their separate journeys towards vegan-ism, and whilst for Jacqui it was easy to cut everything out with immediate effect, it was not that easy for all of them.

Skye said that it was “hard” to cut out some of her favourites, admitting: “I missed things like cheese and whipped cream to begin with.

“But we have vegan cheese and dairy-free whipped cream alternatives.”

And Skipp added: “I struggled a little bit with the stuff we didn’t look into, but once we researched and saw where our food was coming from it was easy.”

Their dad said: “Once we had all watched that documentary, it was far easier for us as a family. We have united as a family and made that decision.”

The family say that a common misconception about vegans is that they are ‘militant’ and ‘crazy’.

But they claim that their problem is not with peoples decision to eat meat, but the refusal to understand the processes behind meat and dairy, in order to make an informed decision.

Jacqui says she doesn’t want vegans to be perceived as these things, but that she wants to inform people, by explaining the processes to them.

And the family often do this through social media – but this has led to relationships with friends and family breaking down entirely.

Jacqui said: “A lot of people don’t realise, and I think we are manipulated by the industry to think everything is happy and everything is great.

“I think thats corrupt to sell a product without transparency.”

“So when I started posting about it and raising awareness, I lost a lot of my friendships – because they were telling me to be quiet about it.”

Teaching assistant Ryan added: “There is nothing in schools now to teach kids where their food comes from, how it is slaughtered and the process and all of that kind of stuff.

“So for me, posting was the most powerful thing I could do, I could get things out on social media for people to see and read.

“I got grief from friends back in the Midlands, where I grew up, saying this is not what Facebook is about, stop with the dead images of animals and share family photos instead.”

Trolls even went as far to tell Ryan that he was disrespecting the memory of his father, who was a butcher.

And the couple haven’t spoken to Jacqui’s sister in over a year, who she used to be really close to.

Skipp, who has been bullied and regularly has meat waved in his face at school, said that he keeps quiet about his vegan-ism when he is there, but is still targeted because of it.

He said: “A dairy farmers child argued with me that a calf doesn’t need to be born for milk to be made, and I was made to look stupid because obviously everyone will believe the farmer’s son over me.”

Jacqui said: “Initially I became vegan because I didn’t want anything to do with it (eating dairy and meat).

“If I had just gone vegan and kept quiet about it, my friends would have probably left me alone.

“But the breaking of friendships was mostly because we wanted to inform people.

“Passion is misunderstood to be aggression or hatred. I have been to parent’s evenings and had people turn their backs to me.

“They would rather do that than engage in a conversation that will make them feel uncomfortable.”

Living in Cornwall, the family are faced with an added pressure being vegan as they are completely surrounded by agricultural farming.

Many of the children’s classmates are from farming families and farming backgrounds.

But Ryan and Jacqui want to put to bed ideas that all vegans are anti-farmers.

Ryan said: “We are not against farmers, they are intelligent people that we need in this world – it’s the process we are against and the lack of transparancy.”

“If we are moving towards a vegan world we will need farmers and we want to work with them – because we need them.”

Skipp said: “My friends are supportive but people do view vegans as wanting to take down farmers, and I understand it because farmers are their families.”

Jacqui and Ryan say that, for their family, it is as simple as replacing meat with chickpeas, lentils and beans now that vegan alternatives are so readily available.

They said: “The main thing we do is swap meat for beans, lentils and chickpeas. We eat lots of fruits, vegetables, nuts and seeds.

“We then replace meat with legumes and swap dairy milk and cheese to plant-based alternatives.

“A lot of people think a vegan diet is expensive and if you were buying processed vegan food, it would be, but just replacing meat with things like lentils is really simple.

“You can still have a processed vegan diet and not be healthy but we try to make ours whole foods and plant based by utilising nuts and seeds.

“As long as we do that we seem to be thriving. Everywhere we go to eat out we can have pretty much anything.

“We don’t feel like we are missing out – we can have a burger, salad, wraps.”

The family’s favourite meal is a peanut butter and chick pea curry, and their favourite dessert is a vegan chocolate cake.

And Skye and Skipp say that their separate schools are also good at catering for them.

Skipp said: “My school is really good, they make me a vegan meal and snack everyday and they make me cakes quite often.”

Skye added: “At first for my school it was a shock as there weren’t any other vegans, but its got a lot better.”

Jacqui said: “It’s a creative menu as well, so its not just the same thing everyday.”

“You really enjoy food again and you get excited. You get the enjoyment back rather than a lump of meat,” she added.