Oliver Cooper, 13, made £9 from his mischievous endeavours as the country is hit with shortages during the Coronavirus outbreak 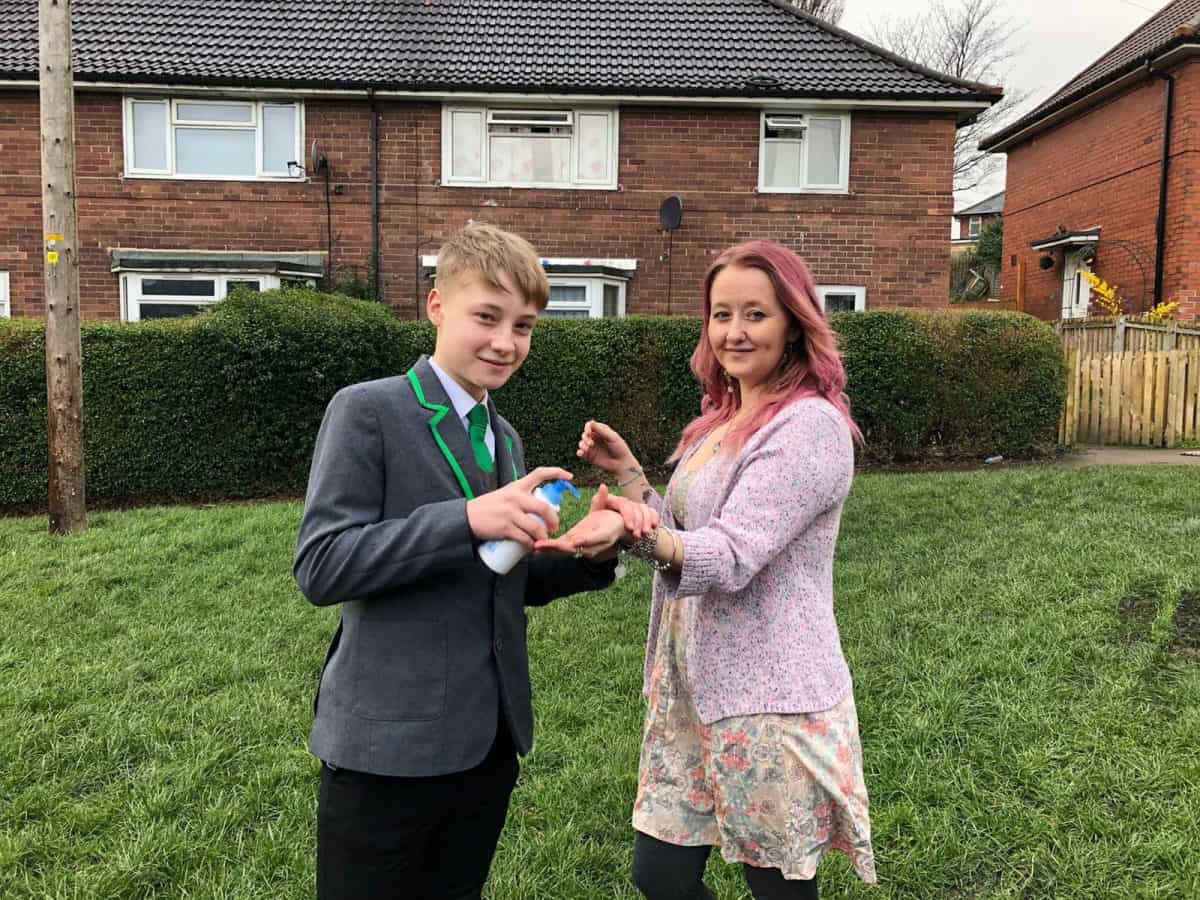 A teenage ‘Del Boy’ was suspended from school yesterday – after being caught selling a squirt of handwash to fellow pupils at 50p a go.

Enteprising Oliver Cooper, 13, picked up the £1.60 tub of Johnson’s child hand wash from a Tesco store as he waited for the school bus.

He offered a squirt to his mates, who suggested he could charge people to use the cleansing product.

But after earning himself a quick £9 – a cool £7.40 profit – the youngster fell foul of killjoy school staff when he offered his potentially-life saving cream to a teacher.

Oliver, who attends Dixon’s Unity Academy in Leeds, West Yorks., was sent home from school for the day for breaching rules.

Staff called his mum Jenny Tompkins, 32, to ask for consent to send him home from school.

She wrote: “This is a picture of my teenage son just getting in from school.

“Why is he getting in from school at 10:53am you ask? Schools don’t finish until 3pm.

“Well the little turd has just been expelled from school for the day after been caught charging students 50p a squirt for hand sanitiser to protect themselfs from the bloody corona virus!! (sic)

“Very hard to discipline this behaviour when his dad phones him from work to call him a f**ing legend.”

Later, the mum-of-seven added: “Edit. I can’t keep up with the comments. For those asking, he made £9! He bought a multipack of Doritos and saving the rest to buy a kebab later.”

Oliver said he had been listening to the news on his phone and their concerns about coronavirus when he decided to buy the hand wash.

He said: “I usually listen to music on the way to school on my phone, but it’s broke, so I’ve been using an old Nokia and all I can listen to is the radio.

“They’ve been going on about the coronavirus and how important hand sanitiser and washing your hands is.

“So before the bus came, I bought a tub of hand wash from Tesco and offered to it my mates.

“They gave me the idea that I could charge for it, so I did.

“Other people at school sell stuff like chewing gum, if somebody wants something, they will pay for it.

“Loads of people wanted this.”

Oliver now faces a day in isolation followed by a two-hour detention.

“I asked the teacher if they wanted any and she said ‘no, I’ve already got some, but you’re not allowed to do that’.”

Mum Jenny, a care assistant, said she tried to tell Oliver off, but his step-dad Andrew Tompkins, 24, called him from work to say praise his entrepreneurial spirit.

“I told him off so that when we go into school, I can tell his head of year that I have told him it’s wrong.

“I think they see it as him exploiting a situation, but his step dad called him a legend halfway through me telling him off so that put a stop to it.

“He’s like my little Del Boy, I won’t be punishing him any further. He’ll do what he has to at school, but that’s it.”

Oliver bought a multi-pack of Doritos on his way home from school and planned to spend the rest of his profit on a donner kebab for his tea.