Mike Hall was given the job just the day after asking if they had jobs going. 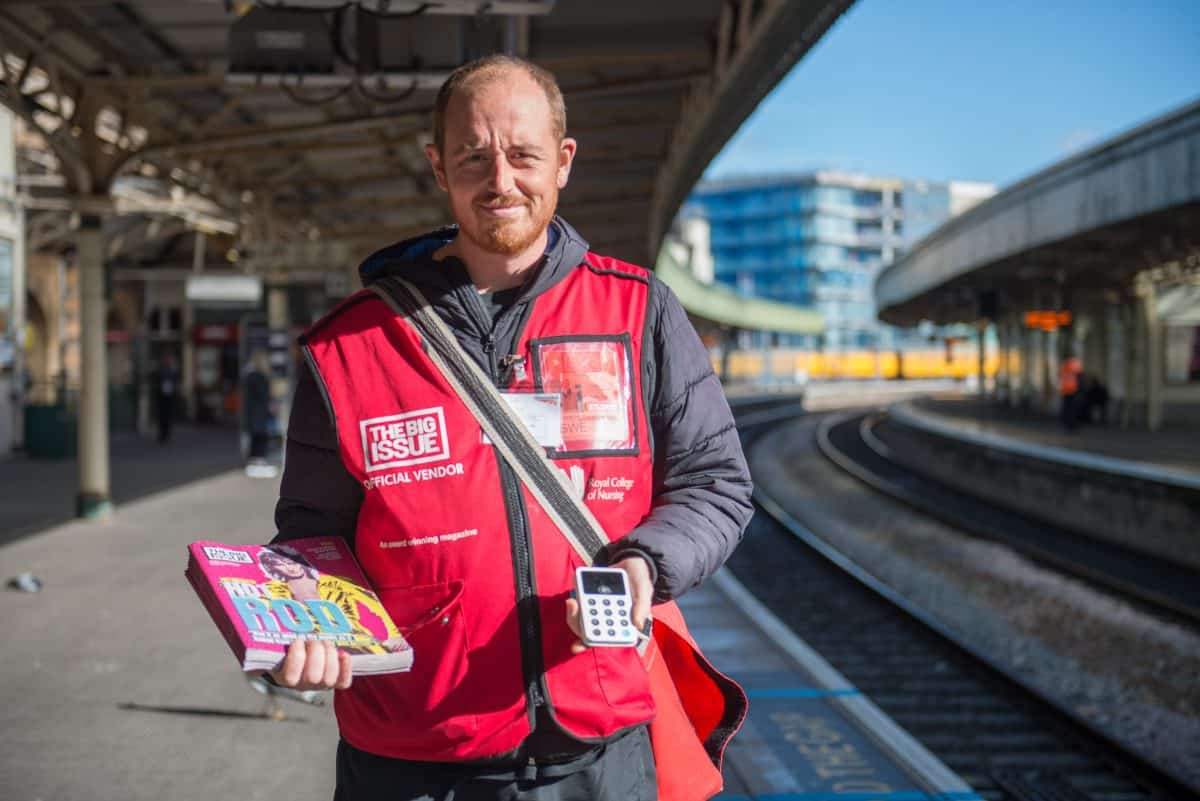 A Big Issue seller at a train station has landed a job at its WHSmith – after the manager was impressed with his magazine selling skills.

Mike Hall, 30, started selling the mag after becoming homeless in 2018 – and was given a pitch at Bristol Temple Meads train station.

He became a familiar face to commuters often offering them directions through the station and even dressing in a Santa outfit at Christmas.

He was given an application form for a role at the store just inside the station’s main entrance – and now has the job.

Mike said: “The job’s really good. Amberlea was walking past me and I literally turned around and asked her, ‘do you have any jobs going?’.

”She told me she had. I filled in the application form and got the job the next day.

“Because she had seen me selling The Big Issue and my customer relations I think she might have fast-tracked me.”

Mike was one of the first vendors to offer his regular customers cashless payments when he took part in The Big Issue’s iZettle trial in late 2018.

He was also keen to go beyond just selling the magazine, – he represented the Big Issue at Downs Festival in Bristol, where he worked as part of the event’s accessibility team, as well as at vegan food festival Vegfest in Cardiff.

Mike also sold the magazine with Welsh Assembly member Jack Sargeant on the streets of Cardiff, to give the politician a taste of what it’s like to work as a vendor on a daily basis.

Mike said: “When I first heard about The Big Issue, I was sat down begging at the time.

“I’d only just become homeless and didn’t know about The Big Issue – the only way I could see of making money was everything that everybody was doing around me.

“But once I started selling, I’ve never looked back since.

“Rather than sitting down looking up at people and feeling sorry for myself, I was stood there trying to offer a service, having face-to-face conversations, rather than people looking down at me.

“The Big Issue has helped me along every step of the way. They could see that I was trying to make a difference in my own life so they supported me as much as they could.

“There is a support network behind the whole thing and I never would have thought that before I started selling the magazine.”

“He was shy at first, but soon settled into his regular location within the passenger subway.

“We noticed as the months passed that he was more confident and was seen on many occasions giving customers directional advice.

“Mike was very dependable, he was on his pitch when expected and always polite and approachable.

“He even dressed in a Santa outfit, to bring Christmas cheer to our customers.

“In a review, he said he was beginning to feel more comfortable to take the next step, he felt ready to move into employment.

“We let the station teams know and a job arose within WHSmith. Mike was taken on at the end of last year and we are delighted to see him getting on so well in his new role.

“We now have our new vendor taking up the pitch at Bristol Temple Meads as we continue to support the Big Issue.”

The Big Issue is an award-winning magazine, which offers a new hope for homeless and vulnerably housed people across the UK.

Vendors buy magazines for £1.25 and sell to the public for £2.50, keeping the difference.

In this way the magazine provides them with the means to earn a legitimate income.

Related – ‘Many people choose to be on the streets,’ Tory MP says in homelessness debate