Rishi Sunak's leadership bid stalled this week. Despite efforts to call in the cavalry, no Tory MP has been able to successfully defend him. 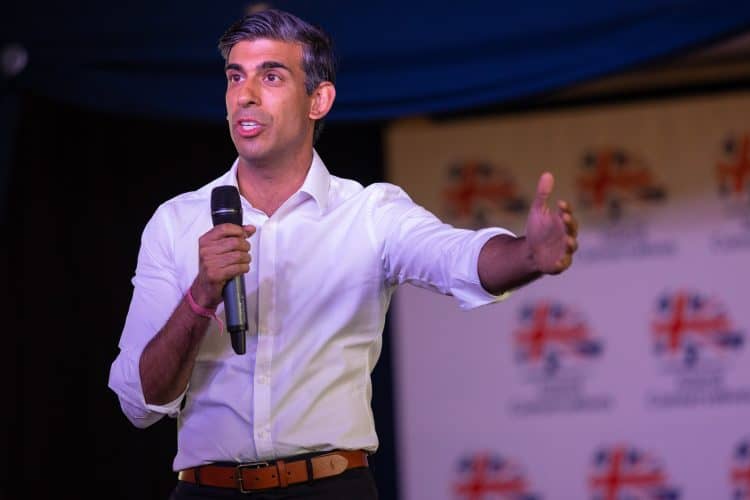 Rishi Sunak – the man who doesn’t know how to use a debit card properly – is often accused of being ‘out of touch’ with the British public. Unfortunately for the man gunning to be our next Prime Minister, that notion was reinforced this week, and no Tory MP can change that.

The footage went viral after appearing online just a few days ago. Despite attempts to clarify his comments, there really isn’t much anyone can do to stop him looking like a ‘Reverse Robin Hood‘. However, no-one loves a futile endeavour more than a Tory MP.

Andrew Bowie, who represents West Aberdeen, went into bat for Mr. Sunak over the weekend. Unfortunately for him, there was no dodging of any curveballs. Instead, his attempts to explain why Rishi made his remarks did very little to bring a fresh perspective to matters.

Tory MP attempts to defend Sunak – but many remain unconvinced

Bowie defended his colleague, by arguing that ALL areas in the country must be entitled to levelling-up funds. In a self-defeating argument, the Tory MP spoke about ‘poverty and inequality’ in his own constituency, only managing to dig a hole further.

“What Rishi [Sunak] was talking about was the Treasury’s spending formulas. All the money went to urban settings. Rural settings were missing out. Levelling up should be for all. I represent a picturesque constituency, but there is poverty and inequality in these places too.”

“Rishi was trying to make sure everyone benefitted from levelling up, not just the urban areas. He was delivering for the entire country, as per the manifesto commitments. The reason we are able to put money into struggling towns is because the funding was reviewed.” | Andrew Bowie