If this doesn't make you realise how serious the heatwave is, nothing will: The UK will become one of the hottest places ON EARTH by Tuesday. 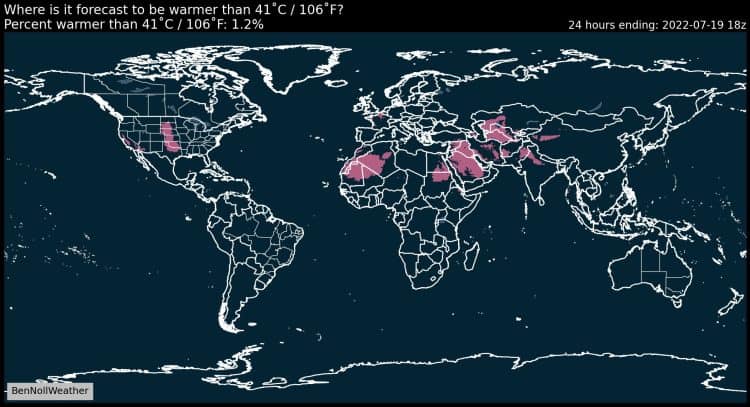 Bloody hell, this is some going: The UK is set to become one of the hottest places on the planet this week, as temperatures look set to soar past the 40C mark. A Level 4 warning is in place for the next couple of days, and the heatwave is now likely to reach a brutal peak.

UK set to be hotter than 99% of Earth this week

It’s all but confirmed Britain will experience a new record high temperature in the coming days – and Tuesday 19 July looks to be the hottest of the lot. The country is set to bake in the extreme heat, and according to the experts, this is no ordinary weather pattern.

Ben Noll, a New Zealand-based meteorologist, has taken the liberty of comparing the UK’s hottest forecasted temperature for this week, with other hot-spots across the world. Incredibly, almost 99% of Earth’s surface will be cooler than the height of our summer heatwave.

Noll described the projection as ‘very anomalous’, and has advised Brits to do whatever it takes to stay cool

“The highest predicted UK temperature on Tuesday (near 41˚C) would be hotter than about 98.8% of Earth. The only hotter places include California and the Plains in the US, the Sahara Desert, France, Belgium, the Middle East, India, and western China.”

“Only about 1.2% of the planet’s surface than the UK’s highest forecast temperature. The hottest UK temperatures on Tuesday are expected to be about 30˚C warmer than the global average maximum temperature. In other words, it’s very anomalous on a global scale.”

Mr. Noll has produced two visually stunning maps, both of which he Tweeted out on Saturday. Only places like the Sahara Desert, the Middle East, and California can compete with the UK this week – but these are locations that are used to stifling temperatures in the forties.

Should the mercury soar past 40C, it would be the first time such a reading has been made in Blighty. Anything registering above 38.8C will constitute a new record, breaking the one set in Cambridge just three years ago.