Speed dating? Give it a try today and start your journey towards not being single. There is no doubt about it: being single has its benefits. But if you are desperately searching for a partner, that little bit of love and magic in your life, it’s possible to become despondent after yo you do a […]

by Guest Contributor
in Relationships 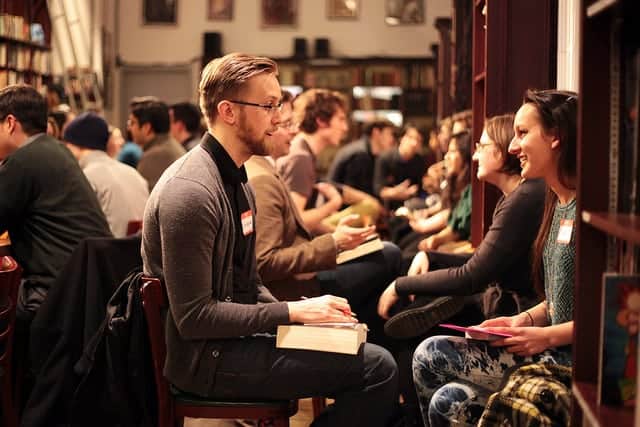 Speed dating? Give it a try today and start your journey towards not being single.

There is no doubt about it: being single has its benefits. But if you are desperately searching for a partner, that little bit of love and magic in your life, it’s possible to become despondent after yo you do a tour of the different bars offering the singles nights London has to offer. Or perhaps you’ve seemingly ‘swiped right’ to the entire population of Tinder who either have a shirt on, or don’t look like a serial killer or teen-gangsta (all five of them).

The good thing about it is that it’s never too late to try something new, and old. Speed dating is making a comeback.

Certain characteristics (or their absence) can reduce or increase the amount of time it takes until you find someone, but more often than not, it’s just a matter of time. While many are crying themselves to sleep or spending their evenings looking out the window thinking ‘what if’, you can take control of your life and actively begin the search.

Speed dating is something that many countries have grown to grasp and apply. This worldwide sensation is a solid way of meeting new people in a more meaningful way than trawling online sites. It is based around the idea that the people you meet through speed dating also want to meet new people. Just hop on SpeedDater and start your quest for love and happiness, leaving behind any habit of sobbing and feeling sorry for yourself.

So what is speed dating?

It’s quite simple. Speed dating is an event organized by various individuals or establishments where singles gather up and have bite size dates that only last for a couple of minutes. Once the time is up, they switch partners and so new people are met. Eventually, there has to be someone that stands out and you think you could take a liking into. If you are interested in one of the people you have met at the speed dating session, you can contact the event organizer and have them give you that person’s information. Of course, this implies that they took a liking in you too. If the case is so, the event manager will gladly offer you the other person’s phone number, email, or whatever type of contact info was supplied upon registration.

There’s no strict rule about speed dating can occur. From the local pub to the classiest restaurant in town, any place can be a good place for speed dating. Of course, it depends on where the available speed dating events are particularly in your area, or in other words which establishment owners are interested in organizing such an event.

Whilst speed dating has taken a back seat in recent years, it is still a great way to get past what is probably the hardest part about finding a suitable partner: meeting new people. Many people are tiring of the soulless ‘app’ style dating. Speed dating replaces the sometimes harsh ‘sitting at the bar waiting for something to happen’ with the much snappier instant meeting of new people, and that is what makes it great.