When tourists ask me to point them in the direction of a real British pub in London I send them to one of more than 20 Sam Smith’s pubs. They may not be tourist hotspots and are certainly not glamorous, but in the parlance of Jarvis Cocker, “you want to live like common people, you […]

by Joe Mellor
in Bars, Food and Drink 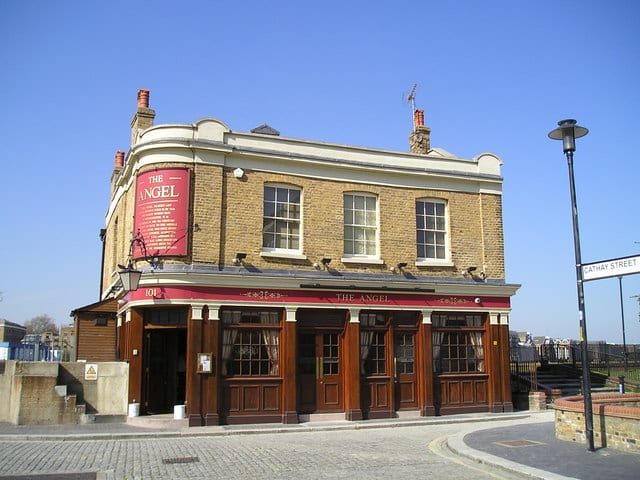 When tourists ask me to point them in the direction of a real British pub in London I send them to one of more than 20 Sam Smith’s pubs. They may not be tourist hotspots and are certainly not glamorous, but in the parlance of Jarvis Cocker, “you want to live like common people, you want to do whatever common people do”, go visit our Samuel.

But equipping yourself with a bit of context beforehand is advised. Sam Smith’s is run on an age-old and iron clad strategy of providing good, cheap ale in a real-ale setting. That means everything gets stripped back. Ornate furniture in untouched buildings, no music, no sports, not even a solitary shuffleboard can be found for entertainment. It’s not no-frills, but more beer in hand, let’s have a chat pub chain.

Which is great, because by stripping everything back you are left with the original characteristics of the building rather than juvenile imitations of ‘traditional London’ that are being attempted by most other places. The food menu consists of ‘sausage and mash’ and ‘fish and chips’ rather than ‘pork and fennel sausages with braised castelluccio lentils and caramelised onion gravy’ and ‘roasted sea trout with autumn vegetables in an aromatic broth’. The beer is ridiculously cheap and served well. So while you’re in town, why not try tick a few of these off: The Captain Kidd is my favourite pub in London, although I must admit to having penchant for riverside boozers. Located along the cobbled streets of Wapping it has a distinct nautical feel and encompasses many of the pirate characteristics of its namesake. There’s a large beer garden overlooking the River Thames with the The Old Salt Quay directly adjacent and Canary Wharf set in the distance.

Interesting Fact: Captain William Kidd was executed for piracy at Wapping’s execution dock in 1701, but the hangman’s rope snapped at the first attempt and he was taken down before trying again. The Angel in Bermondsey has a lovely warm feel, as if your granddad has set up a pub in his living room and invited you and all your mates around. Set on a cobbled street on the south bank of the River Thames it was built by the monks of Bermondsey Priory and was recently refurbished to reveal large spaces where you can drink in solitude. The verandah also offers a nice spot to sit out on a sunny day and watch the river traffic

Interesting Fact: Christopher Jones, captain of the Mayflower, is said to have hired crew at The Angel and Captain Kidd prepared for a voyage to Australia at the inn. Windsor Castle has an almost gothic feel from the outset but the pub has been beautifully restored of late and now sparkles in the sun. Hidden behind Westminster Cathedral the pub is easily within reaching distance if you find yourself in central London. The interior consists of hardwood panelled walls, a large fireplace and a mahogany bar complete with ornate lamp holders. There’s a billiards room in the back of the pub with all the original fittings, other than – in true Sam Smith’s style – a billiards table.

Interesting Fact: The pub used to be called The Cardinal after ex-Catholic Archbishop of Westminster Cardinal Manning.

The Earl of Lonsdale: Notting Hill The Earl of Lonsdale occupies the corner of Portobello Road and Westbourne Grove and looks like an old buffet carriage of a train from the outset with wood panels spanning the length of the exterior. Inside it reflects a traditional Sam Smith’s layout with big armchairs straddling tables in pairs. There’s a great beer garden too which tends to get busy year-round.

Interesting Fact: The pub is named after the so-called Yellow Earl, who is most famous as the founder of the AA. The Chandos is located within a stone’s throw of Trafalgar Square and Covent Garden which means it usually has a few tables of lost American tourists and a few groups of LADS doing the Monopoly Pub Crawl (Stop #19 – Trafalgar Square). The complete wood exterior is made all the more magical once inside with button-back chairs and sofas littering the spacious pub.

Interesting Fact: Rick Steves, host of the American television series Rick Steves’ Europe, recommended The Chandos in one of this many books.

The Angel in the Fields: Marylebone The Angel in the Fields is a fine name for a pub and reflects the beauty of the white-washed exterior that is typical for this part of Marylebone. Set amongst the expensive and fashionable boutiques of Marylebone High Street it offers a welcomed watering hole for thirsty shoppers or exhausted husbands who can rest their tired feet on the many bar stools and chairs as they admire the richly decorated windows and pray their spouse shows some restraint in the neighbouring shops.

Interesting Fact: Infuriatingly, I can’t find where name The Angel in the Fields is derived from. Perhaps it’s from the 1951 film Angels in the Outfield? Do let us know if you know. The Bricklayers Arms (or the Brickies) showcases what Sam Smith’s does best. It has two very distinct areas for drinking; downstairs for the Soho media lot that crowd around a central bar and an upstairs that is reminiscent of an old cigar room with tables, stools and sofas that are all conductive of a good chat. As the saying goes, “if a Sam Smith’s sofa could talk….. it’d probably moan about the price of beer.”

Interesting Fact: Fitzrovia is named after the Fitzroy Tavern, a stone’s throw from the Brickies This is about as traditional as you’ll get for a pub in London with a fantastic, exuberant Victorian pub exterior and giant glass lanterns. Once you and your mates have settled in and finally stopped giggling about the name you’ll find the interior very much lives up to the grandeur of the exterior with a large staircase, ornate bar and large wooden partitions sporting traditional clocks.

Interesting Fact: The pub was built in 1904 by prominent architects Bird and Walters.

The Lyceum: The Strand The Lyceum is a typical theatre pub within touching distance of the renowned Lyceum Theatre. There is a wealth of characterful nooks and crannies with booths downstairs that are perfect for a pre-performance drink with the missus. Theatre pictures and memorabilia litter the Edwardian walls. Take advantage of the all the floors if you go for a drink, they’re all individually brilliant.

Interesting Fact: Disney’s The Lion King has been at the theatre since 1999

The Cittie of Yorke: Holborn The Cittie of Yorke is a pub you’ve got to see to believe. From the outset it doesn’t seem to be anything special, wedged amongst the rows of Chancery Lane buildings, but the interior is magical. Lined with dark wood alcoves with old barrels over the long bar and framed portraits from Vanity Fair on the walls it’s like stepping into Santa’s grotto for a real ale fan.

Interesting Fact: Although the current building is a rebuilding of the 1920s, the buildings on this site have been pubs since 1430.