Signature Brew have collaborated with The Darkness on the launch of Bells End, an extra seasonal bitter. 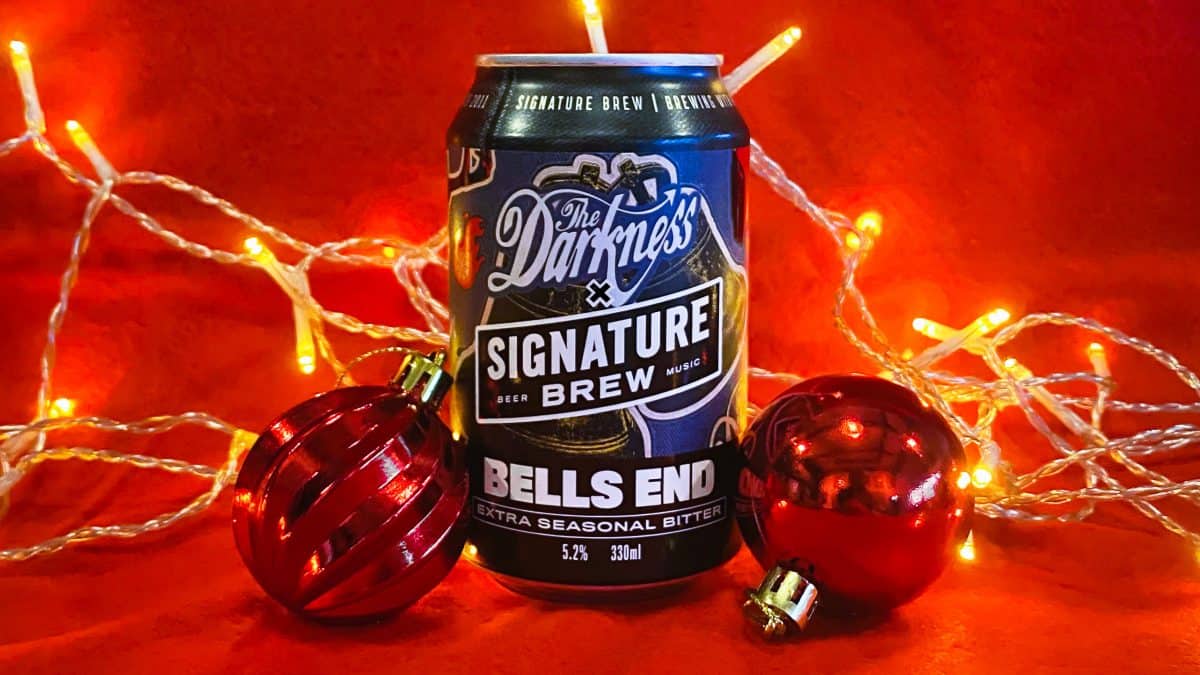 The world’s number one brewery for band collaboration beers, Signature Brew has collaborated with The Darkness on the launch of Bells End, an Extra Seasonal Bitter. Named for the band’s hit Christmas single, Christmastime (Don’t Let The Bells End), the beer is the latest addition to a string of releases from the East London brewery.

When Signature Brew were forced to close their venues in Haggerston and Walthamstow earlier this year, the brewery launched a number of new initiatives. These included the introduction of various new beers, including All Together. Signature Brew also created a ‘Pub in a Box’ experience (a festive edition of which is now available), delivered by out of work musicians (paid the London Living Wage), intending to bring the pub experience to homes around the UK, filled with a selection of beers, glassware, snacks, and a pub quiz.

Having worked with the likes of Idles, Mogwai, Alt-J, Slaves, Mastodon, Frank Turner, and more, the Walthamstow-based brewery was set up by Sam McGregor and Tom Bott, with a team comprised of musicians and music fans alike. Since 2011, Signature Brew has been on a mission “to revolutionise the quality of beer at live music events”. That focus has continued, with socially distanced gigs hosted between lockdowns, while two shows by The Skints are also scheduled, in addition to a ‘Piss Up in a Brewery’ event set to take place “when all of this blows over”.

On the launch of Bells End, Sam McGregor, Co-Founder of Signature Brew said: “We were really excited to brew with The Darkness, we love their music, and the experience didn’t disappoint. The band visited the brewery several times and we collaborated closely with them to find the perfect beer style and the perfect name. 2020 has been a tough one for everyone. We’ve worked with musicians throughout the year, from our socially-distanced brewery shows to enlisting bands to help deliver our now legendary Pub In A Box. As we approach the end of the year everyone needs a laugh and a tasty beer – and Bells End will definitely satisfy both.”

The Darkness’ Dan Hawkins added: “The tasting session for Bells End went well, it was a big night and we tried every ale that we could think of. We wanted a beer that’s punchy and drinkable at the same time. Signature Brew really know their stuff and captured exactly what we were after. Bells End has got a bit of oomph to it but it’s something you can drink in the run up to Christmas and throughout the whole season. It’s a very wintery beer, it’s perfect and we can’t wait for everyone to try it.”

Brewed to 5.2 per cent abv, using English hops, Bells End has a deep copper complexion, with medium-low carbonation. On the nose, feint stone fruit aromas are joined by some earthy hop notes and whiffs of sweet toffee. Alongside some slight spiciness and a suggestion of blackcurrant, rich toffee continues on the palate, backed by some maltiness that’s well balanced with firm bitterness, which lingers on the finish.

Bells End is available from the brewery’s venues in Haggerston and Walthamstow, currently open for takeaway, and from the Signature Brew website. (£3.25 per 330ml can).