Discovering Forman & Field, one of London’s most prized and historic artisan food producers. 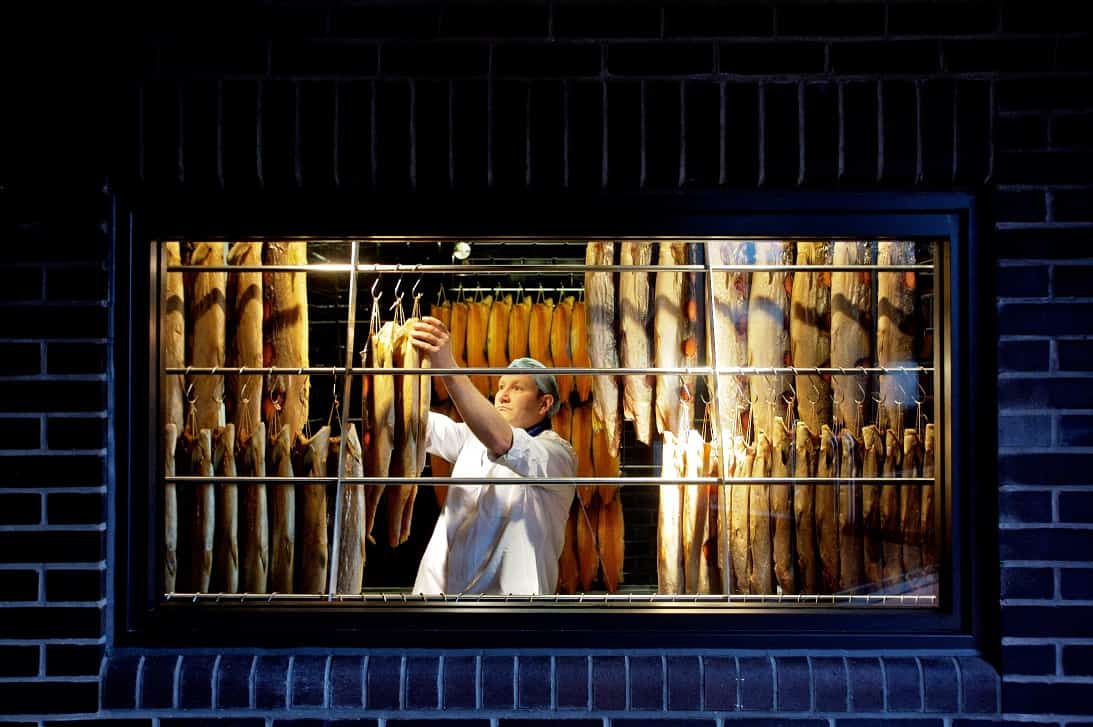 When IOC president Jacques Rogge declared in 2005 that the 30th Olympiad in 2012 would be held in London few people’s thoughts went out to the historic traders of the East End that would be displaced by the grandiose event.

The area of land earmarked for regeneration had been home to commerce for generations, providing a base for the largest concentration of manufacturing businesses in the entire Greater London area.

Printers, dressmakers, stonemasons, tanners and dozens more family-owned firms which had been passed down through generations were uprooted for the sake of two weeks of sport, taking their artisan skills and processes with them.

But one such family business, established in 1905, was not prepared to go down without a fight.

Facing eviction to make way for the Olympic stadium, H. Forman & Son, a family-run smoked salmon business, stood up to Mayor of London Ken Livingstone and Sebastian Coe in a bid to save the firm and many others, with Lance Forman becoming the mouthpiece for disaffected businesses in the area.

Today, seven years on from the global event, Foreman’s Fish Island boasts some of the most iconic views of the Olympic Stadium, and although it has been displaced it appears stronger than ever after overcoming several setbacks to ensure their historic legacy is not lost.

Its riverside Restaurant, featured on BBC Celebrity Masterchef, overlooks the River Lee navigation and the wider surrounding area, serving up salmon smoked on site alongside a number of other highly acclaimed dishes.

In the factory, age-old processes are still maintained with fresh salmon imported from Scotland on a daily basis to be given the original London Cure treatment, unchanged in 100 years.

Their methods remain as an act of defiance against the mass production that has become the scourge of the industry, with slimy, sugary and a distinct lack of freshness becoming a mainstay of supermarket shelves.

It is for that reason that Smoked Scottish salmon cured in London was recently conferred the highly prized protected name (PGI) status, which sets it alongside other protected foods such as Champagne, Parma ham and Wensleydale cheese.

Not only is ‘London Cure Smoked Salmon’ now the only smoked salmon in the world with protected status, but London’s first ever food or drink to achieve this coveted recognition. And there’s no better way of discovering the process behind the coveted cure than by taking a tour around the Smokehouse to discover the history and processes.

The tour begins with a talk by Lance Forman before you don protective gear to descend into Forman’s famous London smokehouse where we will show you the process of producing the world’s finest smoked Scottish salmon, including a smoked salmon carving demonstration on the factory floor by the Guinness World Record Holder, who previously won a carving competition against Gordon Ramsay.

Afterwards, you will take a seat in Forman’s, the onsite riverside Restaurant and Bar which has an incredible view of the Olympic Stadium and a viewing gallery into the smokehouse. It is here where you will enjoy a smoked salmon tasting platter, accompanied by a bottle of still or sparkling water.

It provides a fascinating insight into one of London’s most prized and historic artisan food producers, taking you back in time to discover one of the East End’s best kept secrets.