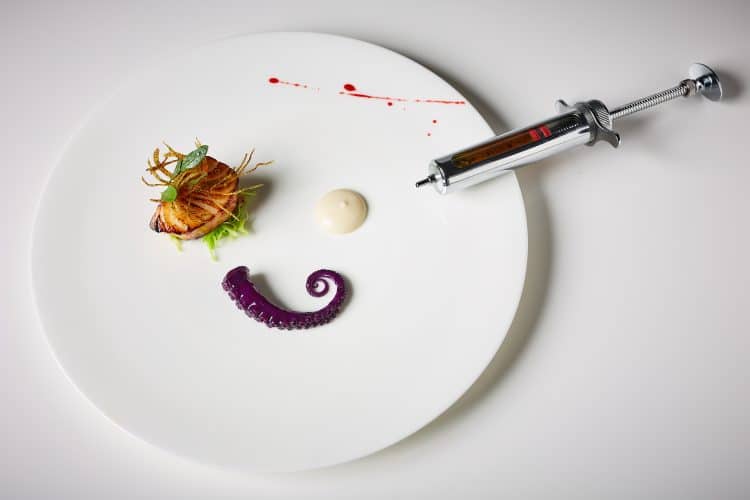 With performances taking place from Tuesday – Sunday (with additional lunch time performances on weekends), The Monarch Theatre has a 20-seat table at its core, with state-of-the-art floor-to-ceiling projection mapping joining a 10-course tasting menu with matching drinks. Each course is inspired by a specific character from the DC Universe, with the food curated by Executive Chef Karl O’Dell.

A recent performance began with an interactive cocktail experience, with a ‘light’ or ‘dark’ cocktail chosen by a retro fairground automaton. For the ‘dark souls’, a drink based with mezcal coffee, Fair Café liqueur and Monkey Shoulder was surprisingly light, with the coffee notes slightly restrained by the sweetness of vanilla and rich cocoa bitters. As for the food, theatrical experiences often over promise and underdeliver, with the menu playing a small supporting role. At The Monarch Theatre, this is not the case.

Each of the dishes served are heavily inspired by characters from the DC Universe, paired with projections which lend an additional dimension to the multi-sensory experience. The first act heavily revolves around Gotham City’s villains, while the second act celebrates DC heroes. To follow the cocktail reception, snacks payed homage to The Riddler with an ox tongue lollipop acting as a particular highlight, dusted with sweet hibiscus powder and enlivened by a whisper of horseradish. A tiny cornet of Carabinero prawns was also well executed, with subtle wasabi complementing both the prawn and the aftertaste of the ox tail lollipop.

Greed is the subject of The Penguin’s dish: a dainty tartare of scallop, crowned with caviar and a sheet of gold leaf. Although the gold leaf brought nothing to the dish in terms of flavour, the white chocolate sauce compensated plenty, bold enough to stand out but not bold enough to overpower the seafood, embellished with drops of parsley oil.

Even better was an aesthetically arresting wild mushroom parfait. Served on a bed of foliage encased within a glass dome, the parfait was designed to resemble a toadstool, ensnaring a rich, gloriously earthy parfait with creamy texture, to be spread onto a miniature loaf of warm brioche. More visual trickery followed with a Harley Quinn-inspired ‘duck martini’: a coupe glass filled with a hot, crystal-clear duck consommé rampant with lemongrass. Perched on top of the glass, a confit duck croquette was another standout, complete with a solitary sweet blackberry to bring balance. If only more cocktails had a hot, savoury element. Concluding the first act, The Joker’s dish comprised a well-cooked tranche of black cod complemented by miso puree, and a soft, charred octopus tentacle, all arranged to evoke a smiley face. Naturally.

Following a short intermission, dinner continued with a palate cleansing cardamom, passionfruit and pineapple sorbet served in a hollowed-out coconut, succeeded by arguably the best dish of the night: a Mr Freeze tribute comprising a domino of gorgeous smoked eel, a boned pork rib, and – the jewel in the dish’s proverbial crown – a fried frog’s leg with the meat scraped to one end of the bone, armoured with fine breadcrumbs.

One of the most aesthetically intriguing dishes comprised edible jewellery in the form of a celeriac, whisky and macadamia nut pearl, inspired by Cat Woman – of course. As for the final main, The Monarch Theatre pays homage to Bruce Wayne – Batman himself – with a luxurious Black Angus fillet steak alongside a ‘truffle rock’ filled with silky mashed potato. While the steak was perfectly cooked, the richness of the accompanying sauce was perhaps a touch overwhelming, considering both the length of the tasting menu and the fact it was followed by an insalubriously glorious Wonder Woman dessert featuring chocolate and salted caramel, plus delicately spiced hazelnuts which brought plenty of depth to the dish.

Perhaps surprisingly, dinner’s finale was Superman themed, with a fruits of the forest sorbet served on a floating plate, tart and refreshing enough to cleanse the palate without completely whitewashing the decadence of the chocolate dessert.

The Monarch Theatre certainly delivers on its promise of triggering specific emotions and immersing guests into the world of Batman and DC Comics via food. And although expensive at £120 per person at lunch time or £195 for dinner (inclusive of drinks and service), it’s a well-thought out experience which stands out from so many gimmicky themed restaurants, with the food never feeling like a perfunctory afterthought. Ideal for comic fans and food lovers alike.