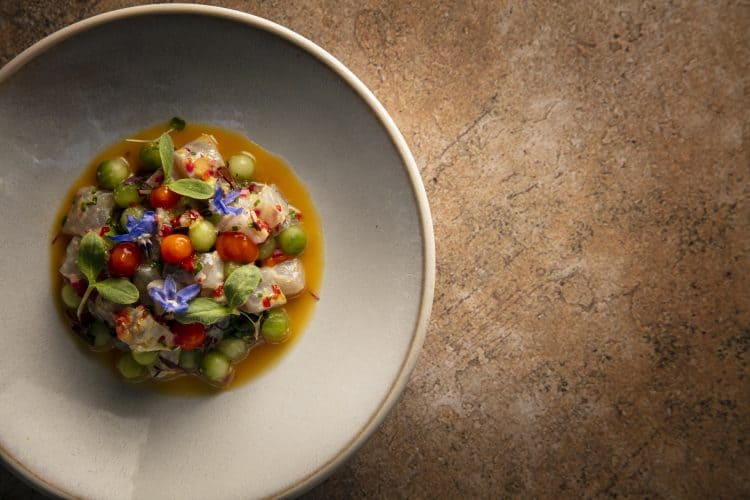 Just off Regent Street, 10 Heddon Street is a residency space that has served as a carousel for launching successful permanent restaurants such as Manteca and Fallow. Having taken over the site until April 2022, Sarap Filipino Bistro opened in November, in partnership with The PEPPER Collective, serving a ‘bistro’ sit-down menu celebrating Ferdinand ‘Budgie’ Montoya’s Filipino heritage and roots with a streamlined menu of modern dishes with “Filipino soul and a London heart”.

On the launch of Sarap Filipino Bistro, Budgie Montoya said: “I’m so excited to be opening Sarap Filipino Bistro at 10 Heddon Street, it’s a fantastic site with a great track record in launching some great restaurants. I want to build on our work at Sarap BAon Brixton of championing FIlipino cuisine and showcase our cuisine in a modern and progressive light. This is not about elevation, this is about representation!”

At 10 Heddon Street, the venue has stylish industrial surroundings, with an impressive cocktail bar and an open kitchen where chefs prepare a range of dishes with “authentic flavours delivered proudly inauthentically”. While the ambience is slightly more formal than that at Sarap BAon, it’s still fairly casual, with warm, charming service.

As for the food, the menu is centred around lechon suckling pig – a Filipino speciality – with the crisp skinned and tender suckling pig presented whole and stuffed with bold lemongrass and aromatics, plus truffled adobo pork rice. Typically served at special occasions in the Phillipines, the lechon is best shared between four-to-six people and must be ordered with 48 hours’ notice.

Elsewhere, the menu continues to pay homage to the sour, salty and sweet characteristics of Filipino cuisine, with a fairly streamlined menu. Four starters and four mains are offered, alongside some sides and two desserts. While choice may seem limited, it feels very much as though all of the kitchen’s focus is put into these few dishes. Rather than serving a huge menu of generally lacklustre options, the few dishes offered are cooked with the utmost care and precision. And as it happens, during a recent dinner at Sarap Filipino Bistro, every dish ordered was practically perfect.

Easily one of the best things I’ve eaten this year, dinner began with the rellenong crispy pata: an entire pig’s trotter, which arrived at the table with an armour of crispy crackling, with a stuffing of pork adobo rice lending multifaceted richness. Not much of a looker, but boasting heartbreakingly beautiful flavours while showcasing a remarkable cut of meat that’s gratuitously underappreciated in the UK. To contrast some of the trotter’s richness, a prettily presented bowl of kinilaw harboured meaty chunks of coconut vinegar-cured sea bass, convoyed by small pearls of cucumber and dollops of tart calamansi gel, ultimately bolstering the dish’s clean, refreshing flavours.

To follow, the famous Sarap poussin inasal comprised an entire poussin marinated in lemongrass, more calamansi and coconut vinegar, spatchcocked and cooked over charcoal until the flesh was just cooked and the skin had become so crispy it was almost brittle. A masterclass in poultry cookery, as well as extracting as much flavour as possible out of something typically towards the safer end of the spectrum. Elsewhere, perfectly cooked slices of rump cap steak had vibrant fuchsia flesh and well-rendered fat that tasted almost buttery, but with pronounced depth of flavour from the ageing process, served lulling in a pool of soy and calamansi jus, with a yeasted onion puree, charred spring onions, and pickled shallot petals which brought balance to the well-executed dish. Sides were also of note, including heavily charred hispi cabbage lavished with fermented shrimp butter, crowned with crispy shallots.

To finish, a parcel of sticky rice was steamed in a banana leaf, rampant with coconut sweetness and drizzled with coconut caramel. Even better, however, was a slice of burnt cassava cheesecake, sweet and starchy with gorgeous flavour and texture: an absolute triumph.

Sarap Filipino Bistro isn’t just one of London’s newest restaurants, it’s also a strong contender for one of the year’s absolute best.