Taking over the kitchen at The Sun & 13 Cantons in Soho, Tendril is a six-month (mostly) vegan pop-up from chef Rishim Sachdeva. 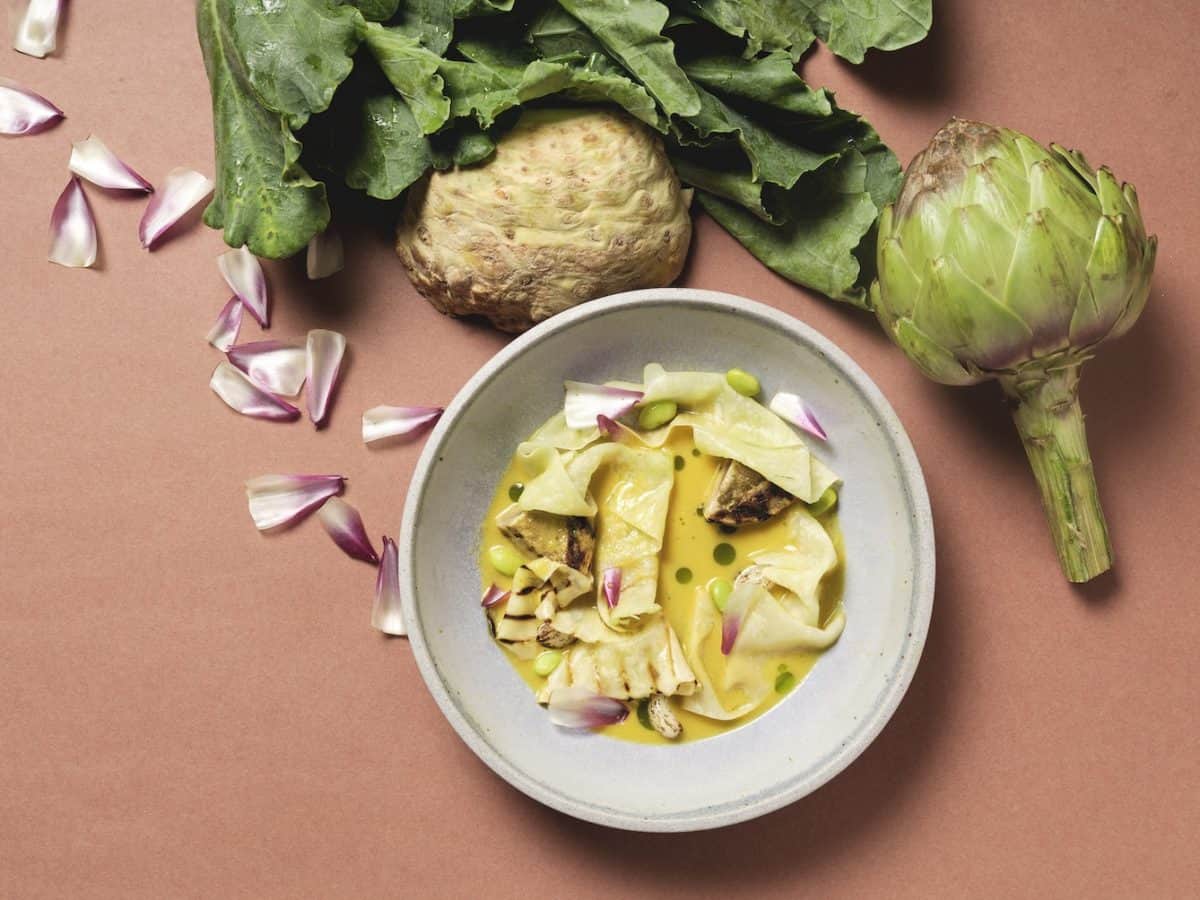 With big shoes to fill, Rishim Sachdeva’s Tendril is inspired by the chef’s own diet. Having taken part in Veganuary during 2019, Rishim’s views on vegan food were completely changed, with the plant-based diet lasting long past the initial month. The chef now sees himself as ‘mostly’ vegan, considering his appreciation of dairy produce – some of which is still partially incorporated into his own diet.

Having previously worked in kitchens such as Heston Blumenthal’s The Fat Duck, Almeida alongside Robin Gill, and Chiltern Firehouse, Tendril was initially launched as a pop-up when Rishim moved back to London on a permanent basis after temporarily returning to his native India.

On the launch of his Tendril residency at The Sun & 13 Cantons, Rishim Sachdeva said: “Tendril is the result of a deeply personal journey for me, from being a hardcore carnivore to a (mostly) vegan convert. I still eat some dairy and would find it almost impossible to give up cheese altogether, hence the (mostly) vegan menu at Tendril. By cooking plant-first food that’s not specific to a cuisine or nationality, I want to recreate my most evocative memories of flavours and textures that have influenced me through my travels.

“Putting plants in the forefront is at the core of Tendril – creating a whole experience based around them that’s imaginative and approachable all at the same time. At the end of the day, it’s tasty and wholesome food that just happens to be made using plant-based ingredients. I am super excited to showcase the new Tendril menu at the Sun & 13 Cantons this month, and look forward to being able to bring our dishes and ethos to a wider audience.”

Scheduled to take place until the end of September 2021, the six month residency was delayed due to the ongoing effects of the Covid-19 pandemic, but with restaurants now open for indoor dining, the chef is able to showcase his menu that aims to introduce plant-based dishes to a wider audience, but without being preachy. Not only is the food served at Tendril ‘mostly’ vegan, it’s consistently very good.

Focussing on seasonal produce found in the UK, drawing inspiration from the chef’s favourite dishes to eat at home, Tendril’s launch menu offers a selection of bar snacks and small plates, plus larger mains and a concise dessert selection. A ‘discovery’ set menu is also available, with a vegan and ‘mostly vegan’ option, offering a strong overview of the menu for £24 per-person.

A recent lunch began with a gorgeous dish of braised beetroot from the ‘discovery’, whose sweet, earthiness was complemented by tender leaves, plus bulgur wheat and pumpkin seeds to add textural depth. A paste of smoked aubergine and tahini, not unlike baba ghanoush, had its silkiness contrasted by the snap from a thin slice of toast, crowned with a suggestion of sesame seeds.

A blue corn tostada capped with smoky beans and a heap of pico de gallo was arguably the best thing eaten, and certainly the most comforting, closely followed by a doorstep slice of wholemeal toast concealed beneath a blizzard of baked brie and truffled mascarpone (hence the ‘mostly vegan’ tagline), brightened by a whisper of honey. To follow, the ratatouille is touted as a particular ‘signature dish’ at Tendril, featuring slow-braised tomato, courgette, aubergine, and peppers that’s robust and deeply gratifying, if not perhaps better suited to cooler weather, joined by a generous mound of quinoa and a vibrant basil puree. Although the ratatouille main was particularly substantial, a slice of chocolate tart was a welcome conclusion: rich, yet unusually light, and all the better for it. A dish that won’t leave you longing for more, nor will it leave you feeling uncomfortably full. It’s a prime example of the delicate, competent cooking showcased, allowing excellent produce to take the reins, without a meat substitute in sight.