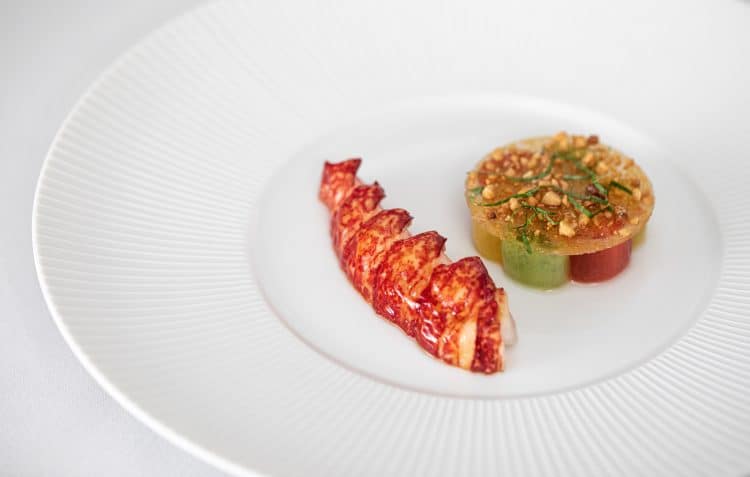 The first solo project from chef Sofian Msetfi, Ormer Mayfair in the Flemings Mayfair hotel has relaunched as Ormer Mayfair by Sofian.

One of the oldest family-owned hotels in London, Flemings Mayfair has been operating since 1851, with the site’s glamorous, 1930’s-inspired restaurant space home to the relaunched fine dining restaurant. At Ormer Mayfair by Sofian, Sofian Msetfi serves a selection of new tasting menus with dishes reflecting the chef’s training and previous work at restaurants such as Adare Manor, The Hand and Flowers, and Midsummer House. Supported by a new Senior Sous Chef, Chris Hopkins (previously Dinner by Heston) and current Senior Sous Chef Shaun Rankin-trained Thomas Moore, the menu showcases the best of British ingredients, offering a five-course tasting menu at lunch, a seven-course menu, and a nine-course tasting menu, each including vegetarian options.

On the launch of Ormer Mayfair by Sofian, chef Sofian Msetfi told The London Economic: “I wanted to present a simpler and yet inspired dining experience for our guests with a move from the traditional a la carte menu to one that offers tasting menus only. This simpler format allows for a more concentrated focus on the quality of the seasonal British produce we are using. Whilst the cooking is of course modern in its approach, it is derived from a classical methodology with skills developed and honed from my previous positions”.

Following an exemplary Negroni in the adjoining lounge bar, a recent dinner at Ormer Mayfair by Sofian began with a prettily presented dish of frizzled Iberico ham strands and diced Bramley apple on a bed of warm Iberico ham jelly with profound depth of flavour but slightly challenging texture. Two dominos of cured Cornish mackerel, on the other hand, were served in a gorgeous cooking liquor with elegant spicing, kombu, and a whisper of sesame which worked well with the fish and its glorious broth.

A breast of Norfolk quail was barbecued and glazed with a glossy pineapple sauce, served with girolle mushrooms, with the flavours bolstered even further by a side of pineapple and crunchy sweetcorn. Even better was a poached lobster tail half, whose sweetness was further coaxed by Isle of Wight tomatoes, plus pine nuts for textural depth.

The menu’s fish main harboured a medallion of cod poached in butter, crowned with crispy Jerusalem artichokes and paper-thin grape slices, while a hazelnut and chicken sauce brought plenty of welcome decadence to the dish already excellent without. Elsewhere, roast squab pigeon was served extremely pink, as it should be, enlivened with some cumin seed and rose water caramel, while a small slice of toast was the jewel in the dish’s proverbial crown, topped with the pigeon’s chopped offal.

To follow, a dish of Kentish strawberries with kefir and extra virgin olive oil worked well to cleanse the palate, while a chocolate tart made with Abiano chocolate and tapioca drew the tasting menu to an exceptionally balanced conclusion: opulent yet not overbearing, a key example of the attention to detail showcased at Ormer Mayfair by Sofian.

Ormer Mayfair by Sofian can be found at Flemings Mayfair, 7-12 Half Moon Street, London, W1J 7BH.