Oklava: One of London’s most exciting modern Turkish restaurants 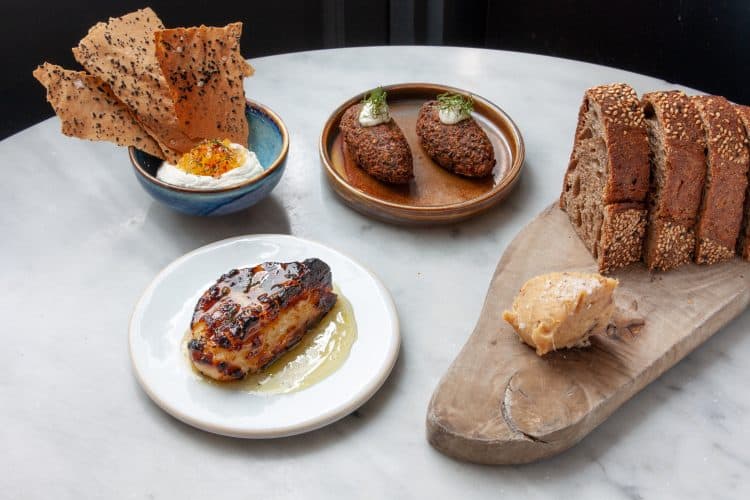 At the beginning of 2020, Selin Kiazim and Laura Christie opened Oklava Bakery & Wine in Fitzrovia. On the site formerly home to the duo’s Kyseri (another restaurant), the bakery opened as a plan to deliver something more casual to suit the area. Although very popular at first, the founders reluctantly decided to close the bakery soon after its launch – open for just eight weeks before the first UK lockdown was enforced. Since then, the pair have been putting all of their efforts into the original Oklava restaurant in Shoreditch.

On the corner of Luke Street, Oklava has a relatively small dining room with a long counter and open kitchen that stretches along the back of the room. With chic décor and some industrial facets, the restaurant is bright and airy at lunch: a comfortable space for tucking into a feast of superlative dishes inspired by chef Selin Kiazim’s Turkish-Cypriot heritage. It’s also worth noting that the service at Oklava is particularly charming, with staff welfare a key focus for both Kiazim and Christie. Amongst other initiatives to help keep staff happy and safe, both in and out of the kitchen, Oklava now incorporates the 12.5 per cent service charge into its menu prices, in order to give staff all of the tip money.

During a recent visit to Oklava, lunch began with a round of sesame-seeded Baharat sourdough, escorted by a mound of Selin Kiazim’s now famous butter (also available to take home) marbled with luxurious medjool dates which bring plenty of sweetness, contrasted by a generous pinch of flaky sea salt. To follow, a slab of grilled helim wasn’t frought with any of the polystyrene squeakiness of most shop-bought versions, instead soft and buttery with its restrained flavour allowing the heavy char to stand out alongside additional flourishes of London honey, wild oregano and the feintest suggestion of lemon. Perfectly simple, but more importantly: simply perfect.

From the restaurant’s stone oven, a titanic pide was slick with bone marrow while sweet caramelised onions brought further boldness alongside ricotta and, best of all, pickled hen of the woods mushrooms to complement the earthy flavours while cutting through much of the richness. The jewel in the menu’s crown, a hunk of cull yaw ewe meat was cloaked with golden breadcrumbs and plunged into seething hot oil until impeccably cooked. Joining it on the plate, a billionaire rich sauce of brown butter, capers and grilled Marmara olives brought even more decadence, working exceptionally well with the meat’s gorgeous flavour profile rampant with delicious intramuscular fat. On the side, the Oklava salad was remarkably well balanced while also cutting through a decent amount of the cull yaw’s fattiness.

A vegetable focussed dish of chilli roasted cauliflower boasted freshness while also acting as a standout, more proof that vegetable dishes can have the same pizzaz as meat dishes – if not even more so. Rubbed with pungent açi biber and tatli biber paste, the cauliflower was heavily charred, then topped with a flurry of chopped parsley, thinly sliced red onion, toasted pistachios, and just a whisper of sumac to produce a dish rife with complementary flavours and welcomely clashing textures.

To finish, the kunefe at Oklava is an exemplary version of the classic dessert, with all of the syrup-drenched, finely shredded pastry you could ever hope for, concealing a molten core of melted cheese, crowned with more pistachios to elevate the dish even further. A glorious conclusion to lunch at one of London’s most exciting modern Turkish restaurants.