With the kitchen headed up by chef Ben Tish, Norma serves Sicilian-inspired food with its Moorish influences showcased. 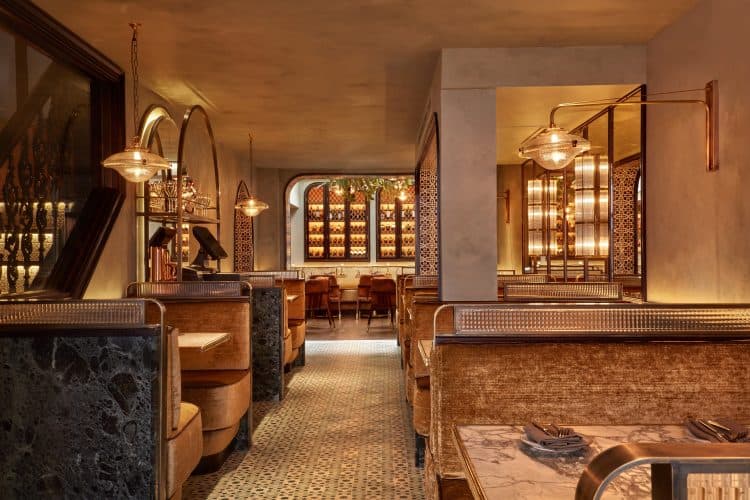 While Italian holidays remain off the cards for most Brits this year, chef Ben Tish’s menu at Norma is heavily inspired by the cooking of Italy and its islands – specifically Sicily.

The first independent restaurant from the team behind The Stafford London, whose collection also includes the likes of The Gamebird and The American Bar at The Stafford, Norma is a far more casual restaurant on Charlotte Street, Fitzrovia.

Having now reopened without lockdown restrictions, Norma is also set to launch a series of monthly supper clubs, offering guests an opportunity to sample Sicilian inspired ingredients and wines. Beginning on Thursday 7th September, the first supper club will showcase raw and cooked seafood from the restaurant’s crudo bar; the October supper club will champion Marsala alongside a four-course dinner; November’s event will be hosted by Donnafugata Winery; while truffle season will be celebrated in December, followed by an evening inspired by Ben Tish’s newest cookbook, Sicilia, in January.

With the kitchen led by Ben Tish, the group’s culinary director, the Sicilian-inspired menu at Norma also takes plenty of influences from Moorish cuisine and the impact it’s had on the island. A recent lunch began with a round of greaseless spaghettini fritters lavished with grated cheese and a ramekin of creamy parmesan sauce, both refined and deeply comforting like the best cicchetti. The same can be said for the baby squid that had been cloaked with a thin batter, fried and dusted with sesame seeds. Even better was a large saffron arancino with superlatively al dente risotto snuggling a core of ragù made with fennel sausage, finally capped with a dollop of roasted garlic aioli. Italian bar snacks at their absolute finest.

Crostini soldiers, on the other hand, were crowned with a generous slathering of Nduja whose fieriness was tamed by orange blossom honey which worked perfectly with the spicy pork. A far lighter dish of stone bass crudo harboured slivers of raw fish with radish, pickled Tropea onion petals, salted grape halves, and a scattering of intense grape must bringing plenty of complexity to the dish, with the acidity working particularly well alongside the fish.

From the menu’s pasta section, pasta alla Norma is the restaurant’s signature – the classic Sicilian dish from which the restaurant takes its name. Ben Tish’s take on the dish features a rich sauce of aubergine, ripe tomato, and basil clinging to al dente tubes of rigatoni, dusted with ricotta salata. Elsewhere, bucatini was cooked al dente and studded with sweet Datterini tomatoes and chilli, finished with large red prawns, while ziti lunghi was joined by a gorgeous ragù of rose veal, unusually enlivened by the feintest whisper of coriander, and topped with a blizzard of sharp pecorino.

To finish, homemade cannoli were well structured and piped with sweet ricotta, bookended with candied orange. On the other hand, the ‘Norma’ tiramisu was far from perfunctory, so often added to Italian menus through a notion of seeming necessity, ultimately lacklustre. Instead, the huge portion of tiramisu served at Norma was especially creamy and spiked with pistachio to bring further depth of flavour. Another fresh take on an Italian classic.

Norma can be found at 8 Charlotte Street, London, W1T 2LS.

RELATED: Above at HIDE reopens with new Head Chef