These are the most exciting new London restaurant openings taking place throughout August. 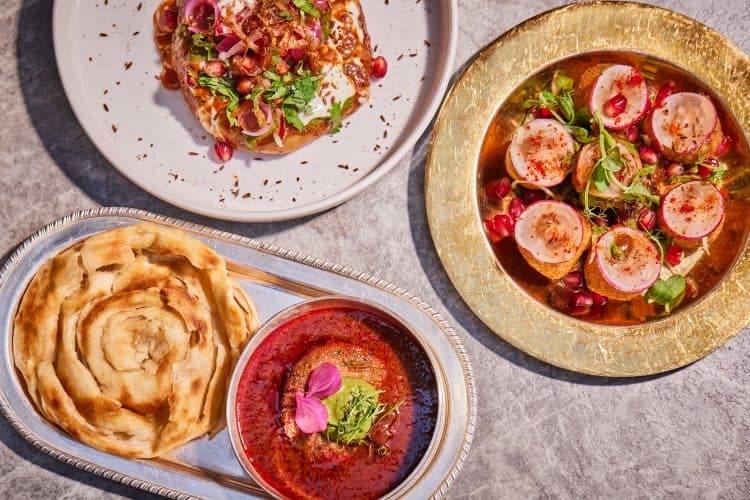 As hospitality businesses continue to re-open, a clutch of brand new restaurants, bars, and pop-ups have also planned to open in London. We pick the most exciting new openings taking place throughout August.

Inspired by his childhood and years spent exploring the street food of northern India, Rohit Ghai will open a new restaurant this month. Specialising in sharing plates and cocktails, Manthan (meaning ‘to churn and reflect’) is a new project from Rohit Ghai and his business partner Abhishake Sangwan. Opening in Mayfair later this month, Manthan will serve a menu championing both Indian home-style cooking and expertly honed techniques. On the menu, a selection of the chef’s mother’s signature dishes will feature, including chatpata, tikkas, chops, and aloo paratha with homemade butter.

Moreover, the menu will have a prominent focus on vegetarian dishes, with almost half of the small plates entirely meat-free and many vegan-friendly. Expect the likes of Burford Brown egg curry; tawe ki masala arbi; pyaz ki kachori with mint and tamarind chutney; curry leaf pepper fish; Jaffna lamb; Andhra jackfruit dosai; and garlic kheer. Dishes with chicken, lamb and guinea fowl can also be made Halal. As for the drinks, a concise cocktail menu will also be served.

On the launch of Manthan, Rohit Ghai said: “I’ve never cooked this way before in London – dishes that truly speak to my past, as well as my present. Manthan is a culmination of many years of work and I hope speaks to Londoners as being representative of the comfort food I love from home as well as the food I have made my name cooking here.”

Manthan is set to open in August and can be found at 49 Maddox Street, London, W1S 2PQ.

A unique, immersive, multi-sensorial experience secreted within the new restaurant, The Monarch Theatre will be a 20-seat venue hosting an 11-course tasting menu with drinks for £195 per person (including drinks and service). Created by Park Row founder James Bulmer, The Monarch Theatre experience is designed to trigger specific emotions through the environment of the room and the food on the table which tie into the theatrical narrative. Highlights will include a ‘poisonous’ mushroom made from a parfait; a scallop, oyster, caviar and white chocolate dish topped with gold leaf; a USDA Black Angus tenderloin with truffle; and edible jewellery.

Park Row is set to open on Tuesday 10th August and can be found at 77 Brewer Street, London, W1F 9ZN.

A new MONOPOLY-inspired restaurant and cocktail bar, The Top Hat will be an immersive venue. A playful homage to the London version of the world-famous board game, the new restaurant will serve a menu of ‘quintessentially British’ small plates alongside cocktails inspired by the city’s historic narratives. Guests will be able to order a deck of ‘MONOPOLY Deal’ with their drinks, to engage in a quick-playing card version of the game, while The Top Hat will sit alongside MONOPOLY Lifesized – a new participatory gameplay attraction bringing the game to life in a live 4D immersive experience across life-sized boards.

On The Top Hat’s menu, food will champion ingredients from the British countryside and sea, as well as showcasing hyper-local produce. Highlights are set to include classics such as The Top Hat Roast, with rump steak, parsnip mash, and Yorkshire pudding; stuffed pork belly and apple sauce; Wye Valley lamb with minted jus; fish and chips; and desserts such as Sutton Farm orchard crumble, lemonade meringue pie with whipped soured cream, and English strawberries and cream Eton mess.

To drink, each cocktail has been designed to represent the properties of London, including the Red Carpet Daiquiri, inspired by Leicester Square; Lychee & Rose Pearl inspired by the original London Pearly Kind road sweep whose memorial statue can be found beneath Trafalgar Square; and The Mayfair Royal Sours, comprising Laurent Perrier Brut Cuvee champagne syrup; Courvoisier VSOP and edible gold, garnished with a sugar £50 note.

On the ground-floor of the new Mondrian Shoreditch, Christina’s is a new all-day coffee, cocktail, natural wine, and katsu sando bar. Opening at 7am, the 45-seat space celebrates conscious partnerships with British artisan producers, having collaborated with the likes of Redemption Roasters, Chestnut Bakery, and Modal Wines. With pastries from Chestnut Bakery served in the morning, the new restaurant serves a unique sando menu from lunch until late into the evenings. Featuring 72-hour slow-fermented Tokyo milk bread, the sando menu includes fillings such as a take on a spicy fried chicken sando; egg and mayo sando; deep fried mortadella katsu sando; aubergine parmigiana sando; and an ‘everyday’ steak sando. A wagyu beef katsu sando will also be available in limited numbers each day, plus a fruit and cream sando with matcha milk bread.

As for the drinks offering, the bar menu is influenced by Italian Aperitivo drinks culture “with a British twist”, while a vast range of organic and biodynamic wines are also served.

Christina’s is open now and can be found at Mondrian Shoreditch, 45 Curtain Road, London, EC2A 3PT.

BIBO is open now and can be found at Mondrian Shoreditch, 45 Curtain Road, London, EC2A 3PT.

A new restaurant on Great North Road, The Engine Rooms is a project from Paul Michaels, owner of Hexagon classic car dealers. Combining beautiful classic cars, an impressive modern art collection overseen by Michaels’ late wife, and a Mediterranean-inspired all-day dining restaurant, The Engine Rooms champions British seasonal produce, which makes up 80 per cent of the menu. For the launch, the menu specifically focuses on fish and vegetables, but also serves a selection of meat dishes using produce sourced from Aubrey Allen. One particular highlight includes grey mullet ceviche with confit tomato dressing, cured egg yolk, samphire, and pistachio. As for the drinks, wine specialist and author Bert Blaize has curated a wine list and bar menu for the restaurant, showcasing wines sourced from small, sustainable vineyards.

The Engine Rooms will officially open on Wednesday 4th August, although the outside space is already open, and can be found at 82-92 Great North Road, London, N2 0NL.

RELATED: The Glade at sketch relaunches with vegetable-based ‘Garden Menu’