The Ninth is a modern French restaurant, by description – but chef Jun Tanaka’s menu delves so much deeper. Having worked alongside chefs such as Michel Roux Jr, Eric Chavot and Phil Howard, British-Japanese chef Jun Tanaka opened his first solo restaurant in 2015 (the ninth restaurant project to have featured his involvement, hence the […] 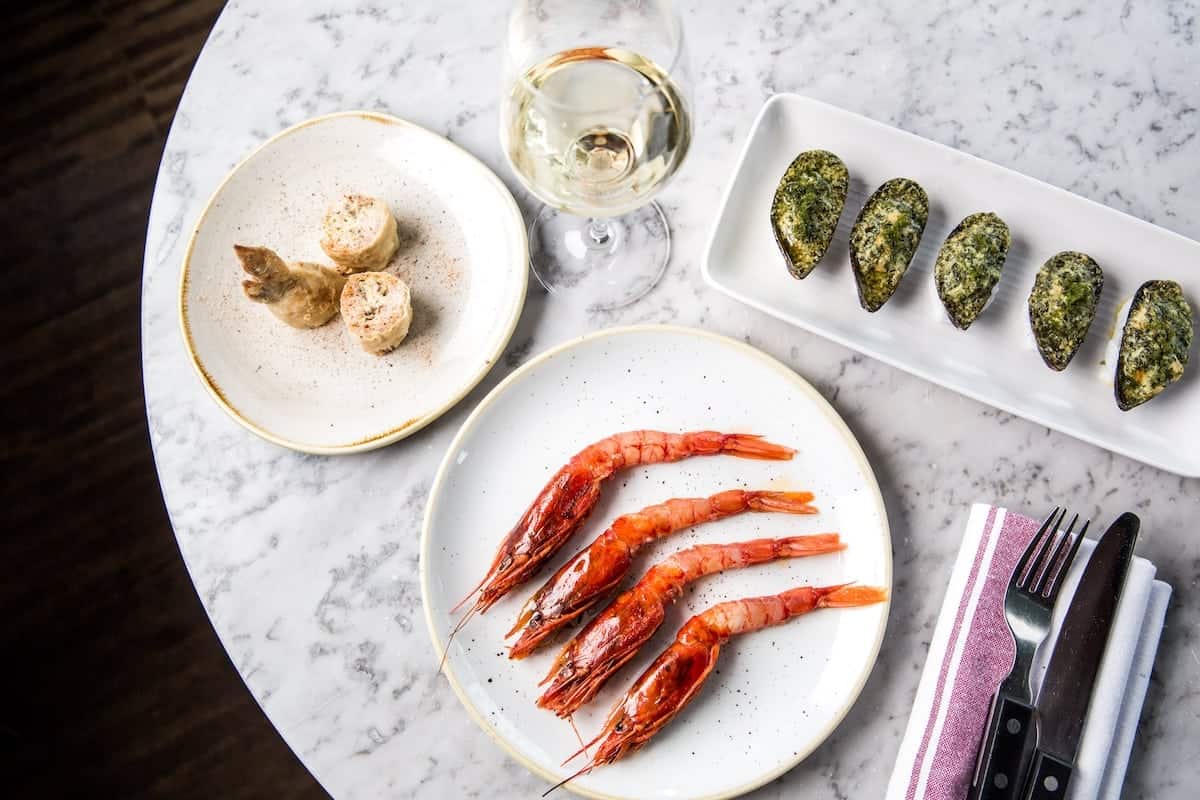 The Ninth is a modern French restaurant, by description – but chef Jun Tanaka’s menu delves so much deeper.

Having worked alongside chefs such as Michel Roux Jr, Eric Chavot and Phil Howard, British-Japanese chef Jun Tanaka opened his first solo restaurant in 2015 (the ninth restaurant project to have featured his involvement, hence the name). Operating amongst fierce competition on Charlotte Street, the restaurant was quickly awarded a Michelin star: becoming a rare model of genuinely enthusing restaurants so eminently feted by the French tyre manufacturers. Here, the menu heavily revolves around the seasons, showcasing a sizeable menu with a focus on sharing plates. Moreover, the space is refreshingly casual, matched with charming, unobtrusive service.

As the mercury rises, Londoners have an obsession with eating outside. Unsurprisingly, many restaurants have caught on, crafting various oases in hope of luring guests determined to enjoy dinner unspoiled by the inconvenience of a roof. Terraces aren’t all created equally, though. Berkeley Street’s Sexy Fish, for instance, has a new street terrace which offers all the glamour of a McDonald’s drive-thru. A drive-thru without the luxury of air conditioning or windows to suppress the chunter of gold-wrap Range Rovers; spluttering smog inches from your “Sexy Eggs & Black Charcoal Muffin”. The Ninth’s outdoor terrace conjures a magical escape from the mundane reality of Fitzrovia, however.

Inside, the restaurant is awash with dark wood flooring, bare-brick walls and copper accents, fronted by an eight-seat bar. The terrace, at the front of the building, is cosy with space for just eight diners. In addition to the the a la carte menu, The Ninth has also launched a new bar and terrace menu, available until half-past seven from Monday to Saturday. Testament to the chef patron’s rich pedigree, the bar menu champions an expertly-prepared melange of dishes. While concentrated flourishes of modernity occasionally prevail, other dishes are thankfully restrained; allowing remarkable produce to glisten, unspoiled by heedless flummery. One such example, panzanella salad (£7.80) featured vibrant Datterini tomatoes, simply accompanied by basil, capers and thin croutons with more crunch than typical. A culinary embodiment of summer, magnificently executed.

Fleshy Sicilian prawns (£6 each) were another celebration of produce: quickly introduced to the grill, the meat still wobbly, emitting typical clean flavour bolstered by the intense juices demanding to be slurped from their scarlet heads. A reworked classic, The Ninth’s Scotch egg (£6) replaced typical sausage meat with shredded duck, spiked with a whisper of rich foie gras to deftly complement the core egg yolk – deep orange and vibrant as sunrise. Rich egg yolk also featured heavily in a dish of thin orecchiette ears, taken from the main menu: basically served with a lavish heap of black truffle shavings (£19).

Nuggets of pressed pig’s trotter (£8.50), deftly fried and cloaked with a crackling of golden breadcrumbs, were another superlative example of satisfying comfort food. The anachronistic sauce, however, was the dish’s unexpected highlight: deep brown, fruity, piquant, slightly sweet. HP this, most certainly, was not. Humble chicken wings (£2.80 each) demonstrated an unthinkable level of rigorous preparation. Entire wings were laboriously deboned, stuffed with rich chicken mousse and morels, breaded and deep fried – as is proper – and presented as a glorious cross section. Even better when paired with a glass of flinty Heinrichshof Sonnenuhr Riesling Trocken.

Another showcase of refined technique, salted ox cheek was, arguably, the best thing eaten. Hunks of house-cured ox cheek had brackishness similar to salt beef, but with flavour naturally deeper than brisket – paired with paper-thin slivers of radish and sourdough toast, perhaps intentionally evocative of a reinterpretation of the classic Reuben sandwich. To finish, strawberry pavlova was decidedly less exciting, though the brittle meringue was rescued by a rocher of thirst quenching strawberry sorbet. Chocolate crémeux, on the other hand, was well-prepared and unapologetically rich, as all chocolate desserts should be.

Alongside an interesting wine list, featuring a selection of democratically priced bottles (ranging from a reasonably £24 to in excess of £300), The Ninth’s bar menu exceeds expectations. Jun Tanaka’s menu strikes a commendable balance of robust flavours executed with refined precision: a rare archetype of Michelin-venerated food I’d happily enjoy again and again.