A wine bar with a food menu of note, The Drop joins the Hart Brothers’ portfolio of restaurants at Coal Drops Yard. Near King’s Cross station and Granary Square, the Heatherwick Studio-designed shopping and restaurant district opened last autumn. Originally established in 1850, to handle to eight million tonnes of coal delivered to the capital […] 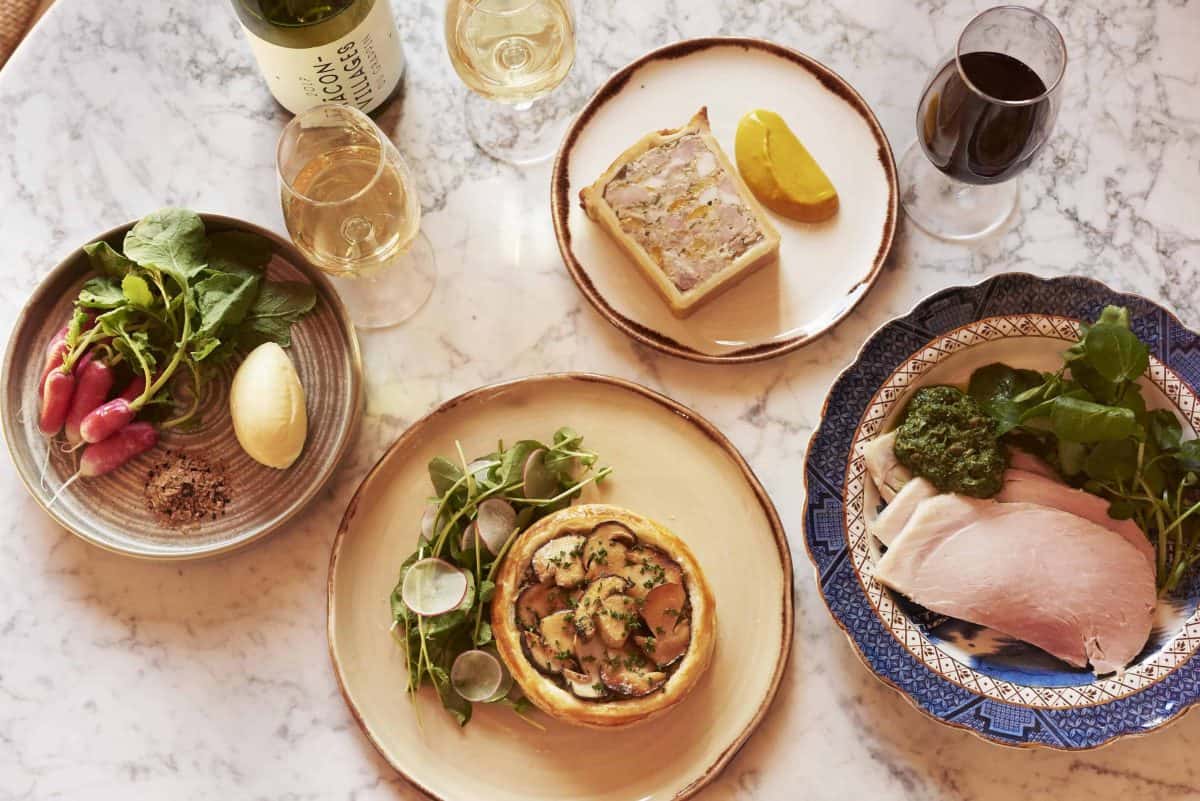 A wine bar with a food menu of note, The Drop joins the Hart Brothers’ portfolio of restaurants at Coal Drops Yard. Near King’s Cross station and Granary Square, the Heatherwick Studio-designed shopping and restaurant district opened last autumn. Originally established in 1850, to handle to eight million tonnes of coal delivered to the capital each year, Coal Drops Yard’s most recent redevelopment sees a parade of Victorian buildings and arches reimagined to home various enterprises. Located in canal-side arches fronting on to cobbled courtyards within the original ‘coal drops’ themselves, restaurants and bars include the likes of Coal Office, hicce, and a cluster of Harts Group sites including Casa Pastor, Plaza Pastor, London’s fourth Barrafina and recently opened Parrillan.

Named after the development it’s housed within, and the wine measure, The Drop occupies a cosy space with bare brick walls that climb and curve into the ceilings, lending an intimate atmosphere, redolent of wine cellars. Split into three rooms, with a counter at one end and a pocket-sized open kitchen at the other, the venue’s middle room is festooned with well-spaced dining tables and chairs, with sympathetic lighting joining the natural light that complements natural light which manages to beam through the windows shielded by a covered semi al fresco space. Service is refreshingly casual yet highly efficient, with staff happy to share knowledge on dishes from the kitchen as well as highlights from the wine list.

An exceptionally balanced selection, the wine list celebrates winemakers met on the owners’ travels, including many with a low-intervention approach, showcasing a plethora of small producers amongst wines from countries less synonymous with wine production. Bottles range from around £26, with a fair by the glass selection beginning at £6.50. A black book of extra special wines is also available, featuring a range of ‘when it’s gone, it’s gone’ bottles. Moreover, a different category of wines is focussed on each month, from Portuguese to South African to alternative sparkling wines. Celebrating alternative sparkling wine, a recent lunch visit began with a glass of La Pamelita, an unexpectedly robust sparkling red produced in Barcelona with Tempranillo and Monastrell grapes.

As for the food, the small kitchen produces a menu of largely British dishes with focus on seasonal produce. A sharing lunch menu for two is also available, including two small plates and a large plate for £25. Overall, the food is a significant step up from standard wine bar fare. From the charcuterie selection, the cured beef, for instance, is extraordinary – featuring paper-thin slivers of Scotch black angus cured in red wine (£15). Thick slicesof salami, on the other hand, struck an impressive fat: flesh ratio, embellished with a generous suggestion of fennel (£10). A vegetable-centric dish built around purple sprouting broccoli spears also harboured some kale, each lulling on a mattress of silky aubergine puree, finished with pine nuts and a smattering of fresh red chilli to add extra vibrancy (£6.50).

A salad of Isle of Wight tomatoes (£7) was a Technicolor ode to summer, finished with some goat’s curd, black olives, basil and a drizzle of grassy olive oil. Another highlight came with a ham hock terrine bifurcated by a strip of compressed pig’s ear to lend slight textural contrast while amplifying the glorious fattiness of the dish (£8). Crispy strips of pig’s ear also featured as a side line, not unlike an intrepid gourmet riff on Frazzles. From the large plates section of the menu, roast chicken breast (£16) was surprisingly lively, so often overcooked and under-seasoned. Here, the cooking was near perfect, cloaked with thick skin and joined by caramelised Grelot onions and uncommonly airy mashed potato laced with chicken fat. Simply remarkable. Even better with a glass of Pheasant’s Tears’ Rkatsiteli – a grippy, full-bodied orange wine produced in Georgia.

Just two desserts were available, alongside the option to order a DIY cheese board from the main menu. A generous slice of Bakewell tart (£6) had terrifically succulent sponge, complete with a whisper of marzipan and black cherry, crowned with a blizzard of toasted almonds and joined by a rocher of lemon mascarpone. Another key example of the gorgeous, simple-yet-effective cooking showcased at The Drop.