The bloated corpse of Theresa May’s premiership is finally floating down the Thames and the political minnows are circling. It will be a leadership race unprecedented in modern times as the Tories compete to see who’s the most buzz-wordy, who can fake compassion for the poor and whose Brexit plan is most like the Siege […] 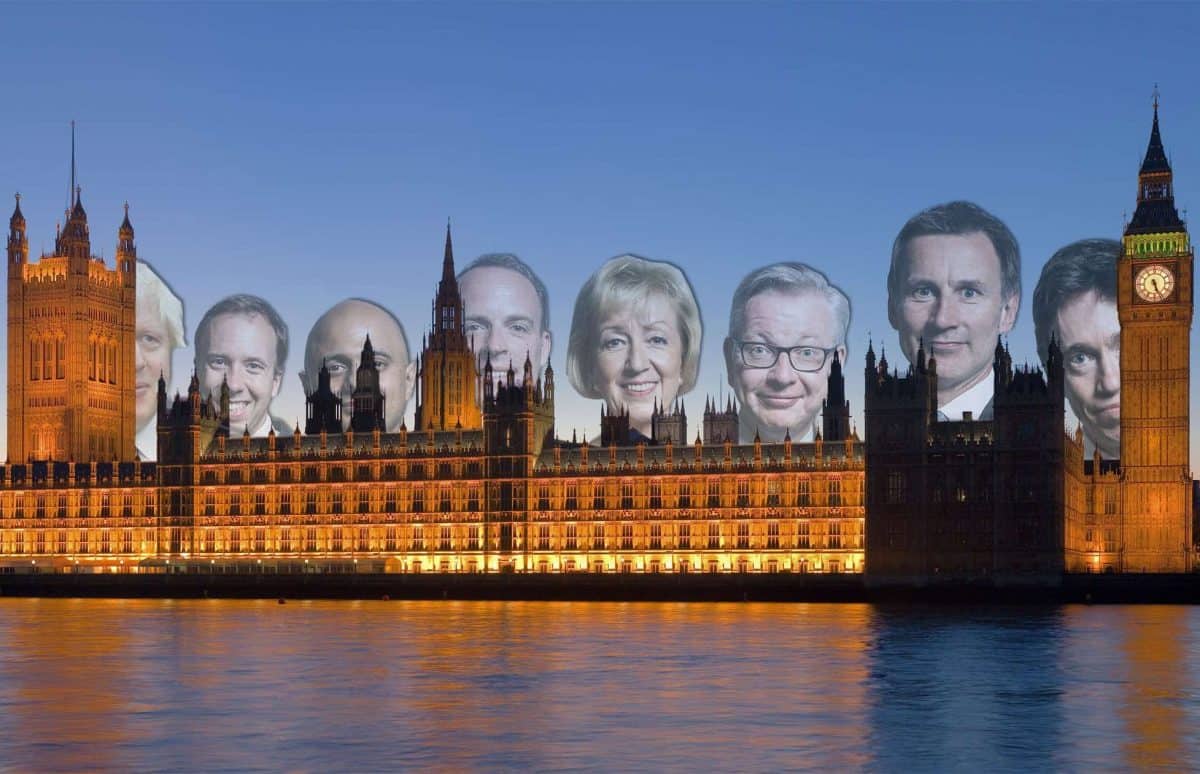 The bloated corpse of Theresa May’s premiership is finally floating down the Thames and the political minnows are circling. It will be a leadership race unprecedented in modern times as the Tories compete to see who’s the most buzz-wordy, who can fake compassion for the poor and whose Brexit plan is most like the Siege of Khartoum.

In the 100 metre stumble to Downing Street, Esther McVey was one of the first out the gate. McVey was astounded when the BBC’s Victoria Derbyshire asked her about austerity. The former Work and Pensions Secretary looked as if she’d never heard the word in her life, let alone associated it with the Conservatives. Such lightning fast reactions to difficult questions are surely what Brexit Britain needs.

Speaking of Derbyshire, her Freudian slip regarding Jeremy Hunt may prove the most interesting thing about his whole campaign. Hunt previously held the title of most hated man in Britain and the Tory leadership seems a small price to pay to get it back.

Also-ran Matt Hancock referred to the UK as an island. But don’t treat this faux pas too harshly. It’s very easy to overlook the fact that Northern Ireland is part of the UK and that Northern Ireland is part of another island, most of which is not part of the UK. Well, it’s incredibly easy to overlook this if you’re a Tory, they seem to do it instinctively. Meanwhile, Hancock is privatising the NHS while promising he isn’t. That invisible border will work out great.

Boris ‘Letter Box’ Johnson has kept a low profile so far, but his supporters are touting his two terms as London mayor as evidence that he can unite the country. I wonder if the Thames ferrymen still tell the old joke: the Mayor of London is about as popular as the plague. They were telling that one when Livingstone was mayor and probably Dick Whittington, too, And Boris Johnson is no Dick Whittington. Plenty of Tories are aching for that tax cut, though.

Michael Gove’s admission of historic cocaine use has shocked the nation. How could someone who attended Oxford in the ‘80s and was a journalist in the ‘90s possibly have used cocaine? I mean, where on Earth did he find it?

Rory Stewart, who is in reality Herbert Pocket from Great Expectations, started the trend of drug-based confessions because he smoked opium at an Iranian wedding. You’ve got to ask two things: Does Stewart still call it Persia in private? And is Cannabis Lassie an unreleased follow up to Reefer Madness?

It turns out it’s now hip to admit to doing illegal drugs, and it leaves us all wondering what Boris Johnson is smoking.

But spare a thought for those candidates who dropped out before the contest even began. It’s usually unfair to call someone a historical footnote, but Kit Malthouse lent his name to an unworkable Brexit ‘compromise’ that will earn him many actual footnotes in history books. James Cleverly has no such luck.

Explaining all the ways the leadership candidates are inadequate or embarrassing would take up too much space and rot the brain. There’s Sajid Javid’s nonsense on the border, Dominic Raab’s one joke (he puts more ‘As’ in his name), Andrea Leadsom’s inability to answer basic questions (and the whole ‘May isn’t a mommy’ thing) but it can all be summed in one phrase: Tory leadership is an oxymoron.

Many Conservatives will admit they haven’t had a good leader since Thatcher (‘Good’, here, is a word that defies dictionary definition). If Thatcher could see her prospective successors, she’d be rolling in her grave, were it not filled with garlic and crucifixes. The whole thing stinks of national embarrassment and impending disaster.

Commentators often talk about the ‘Balkanisation’ of politics, which is a little unfair on the Balkans, but three prime ministers in three years is not a sign of a healthy, stable democracy. So far, Europe has claimed the careers of Thatcher, Cameron and May. It bedevilled Major and obsessed Heath. The next prime minister, whoever the handful of Tories pick, will be no better placed to grasp the European nettle. There’s just no such thing as Conservative leadership right now. After this election, there must be another one. Someone will be hankering for a mandate.

The only drug worth having is the most addictive one: power. Watch what the Tories will do to get it and see what happens when the whole country comes down from that high.