There are far worse ways to while away a Sunday afternoon than in this Timothy Oulton creation in the heart of Chelsea. 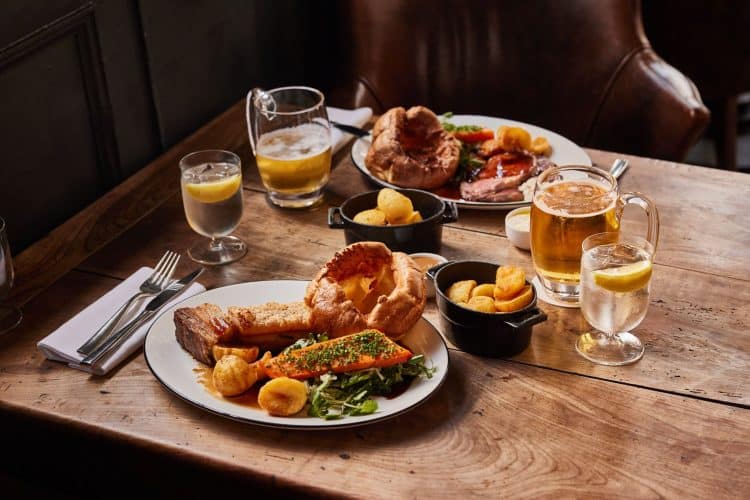 It was a crisp autumnal afternoon as we set out for the Chelsea Pig, walking the length of the King’s Road from Sloane Square past the boutique shops and mews houses that always look as though they are longing for winter to come.

Having seen the neighbourhood pub-cum-brasserie listed among the best Sunday roasts in London I was eager to find out what the fuss was about, and it didn’t take long to buy into the hype.

First off, the decor is quite striking.

Timothy Oulton, whose flagship store is only moments away in the basement of the Bluebird, has styled the pub as a working gallery of his collections, with leather-topped bar stools, wooden tile flooring and a curious scuba diver tank all accentuating his daring yet timeless style.

For the most part, the tables sit around the edges of the bar looking out onto the street, which attracts its fair share of tourists there to gawp at the rows of quintessentially British houses.

We were brought out some warm bread with the chef’s own butter as we pursued the menu, as well as a cold draught Birra Menabrea in an oval tankard.

The small loaf was crunchy on the outside and fluffy within while the butter was smoky and sumptuously creamy. Both cried out to be washed down with refreshing aperitifs.

Duck liver parfait, prawn cocktail and cracked wheat salad were all difficult to pass up on the starter menu, but we plumped for the salmon and burrata.

The former was served as a long, thick chunk resting on a bed of Jerusalem artichoke and a ‘hot toddy’ dressing, while the latter was paired with fruits such as clementines, orange and pear.

Surely, there can be few more autumnal entrees than that.

A Sutton Hoo Chicken was served with a spiced bread sauce that is among the best I’ve ever tasted.

Small gravy boats were readily replenished, and two whopping glasses of Mendoza Malbec were served table-side by the fabulous waiting staff who brought a welcoming air of ease to the room.

We finished off with violet creme Brule that had a tart black current sorbet on top followed by the classic Brule crunch and a velvety yoghurt underneath.

When the composite parts mix it made for what was, in sum, a superb finish to a superb meal.

How Can Small Business Owners Succeed In Times Of High Inflation?