"The Russians can destroy our homes, but not our dreams." 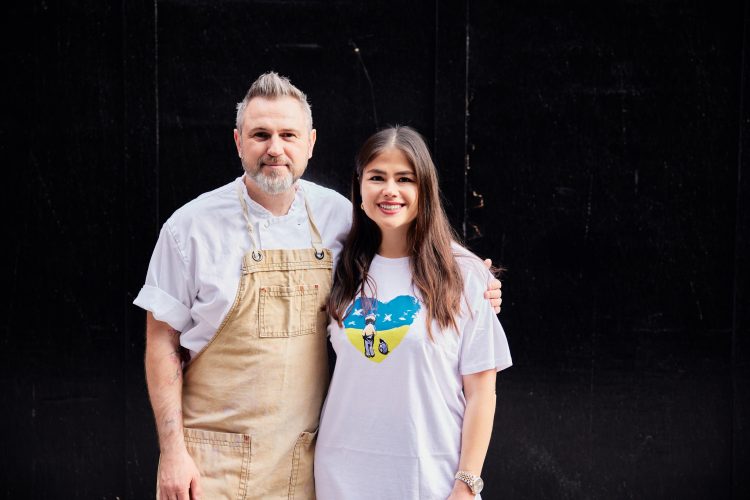 Ukrainian chef Yurii Kovryzhenko and his partner Olga Tsybytovska are set to open a restaurant on Brompton Road in Chelsea.

Mriya, which translates as ‘dream’, will serve classic and contemporary Ukrainian food and will be staffed by refugees who have been forced to leave home due to the war with Russia.

It is believed that more than 15 million Ukrainians have been displaced overall.

Speaking to CODE, Yurii said: “Mriya means dream in Ukrainian, and we as a nation are dreaming of victory, and the opportunity to host people again. We want to share our culture.

“Historically, Ukrainians are real dreamers. In that sense the restaurant is exciting, because it’s the start of a story, the realisation of a dream.

“The Russians can destroy our homes, but not our dreams.”

Yurii is currently actively preparing for the opening of the restaurant. Together with his partner and restaurant’s co-founder, Olga Tsybytovska, they are recruiting staff.

They posted messages to groups of Ukrainians in London on social networks to offer jobs to Ukrainian refugees.

The restaurant will seat 37 (including the cosy terrace). There is a separate refrigerating room where Yuri will ferment vegetables according to ancient Ukrainian recipes because fermentation is an integral part of Ukrainian cuisine.

Assisted by Dima of Dima’s Vodka, the bar will include a special martini list, vodka infusions as well as a vodka and food pairing option to ensure that everyone knows how to say “Budmo” by the end of their visit as well as understanding the important partnership of food and vodka in Ukrainian culture.

Yurii was educated in the best culinary schools in Europe – Ecole Ritz Escoffier, Ferrandi Paris, Basque Culinary Center, and others.

He has received many awards and prizes: Global Chef Awards 2017, Ambassador of Taste for the Global Gastronomy 2021, 2022, and Gold Medal Best of Gastronomy 2021.

Yurii is also a member of Disciples Escoffier International.

Yurii Kovryzhenko’s name is strongly associated with Ukrainian cuisine in Ukraine and abroad.

He is the Ambassador of Ukrainian cuisine worldwide, promotes national gastronomy at official events at Embassies, international forums and competitions, and cooks for top officials and the political elite.

At the start of Russia’s war against Ukraine, Yurii was in London as part of his gastronomic mission. He is actively involved in charitable activities to raise funds for Ukraine.

He held more than 20 charity dinners in four months and raised about £400,000. Highlights include a 1,000-person lunch at the Grosvenor House JW Marriott, dinner with Jamie Oliver and a 10-hand dinner with Michelin-starred chefs Jason Atherton, Tom Sellers, Tom Kitchin and Tom Brown.