In theory, the walk between Westminster station and Roux at Parliament Square should take less than two minutes. But during a curiously bright afternoon on the cusp of Spring, you’ll want to allow at least ten minutes to weave through the human traffic. At noon, the world and its wife has descended upon Parliament Square […] 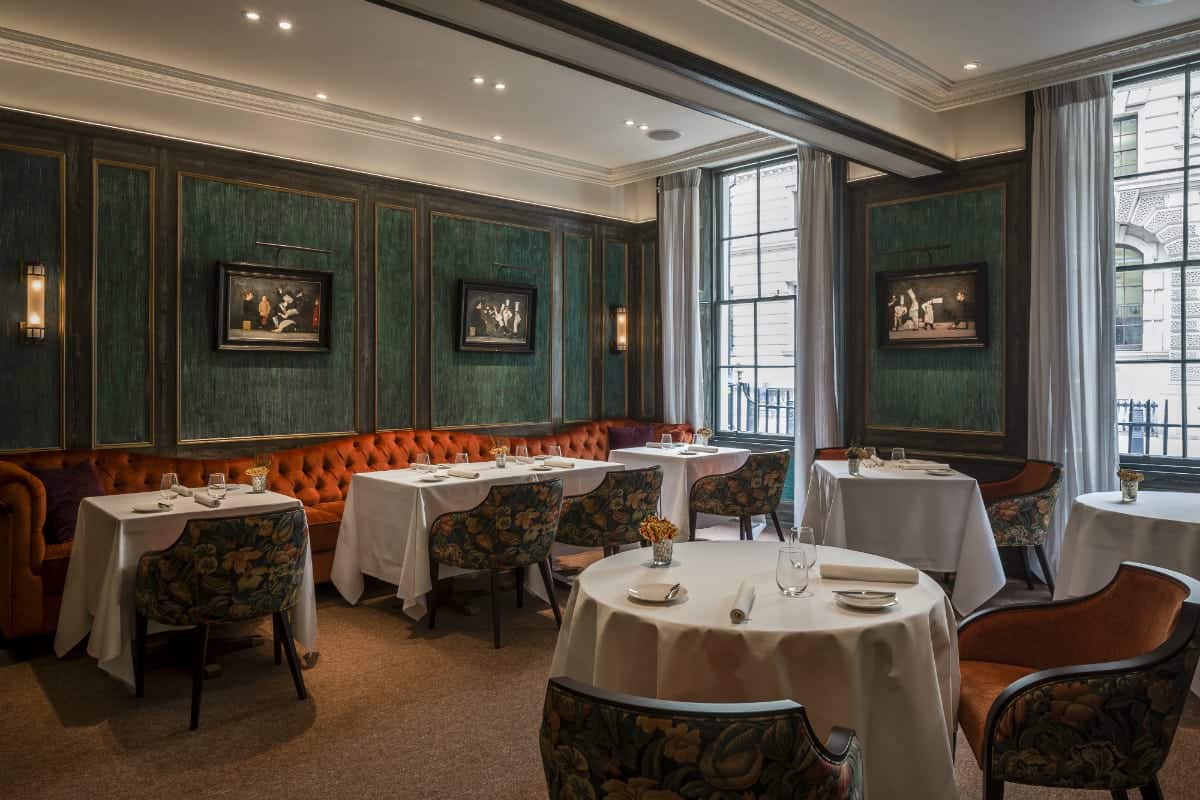 In theory, the walk between Westminster station and Roux at Parliament Square should take less than two minutes. But during a curiously bright afternoon on the cusp of Spring, you’ll want to allow at least ten minutes to weave through the human traffic.

At noon, the world and its wife has descended upon Parliament Square in hope of photographing Elizabeth Tower, unattractively cloaked in steel and silent as the grave. In sharp contrast, the surrounding area is punctuated by a hurricane of noise. Riled protestors roar alongside squealing sirens, the rapturous refrain of aggressive bus drivers blasting their horns, and a general chunter of stationary car engines. Seemingly infinite droves of teenagers grunt uninterestedly as tour guides bark in contention.

Within the RICS building on the north-east corner of its namesake; Roux at Parliament Square is an unexpected escape from the apocalyptic rumble. Although Michel Roux Jr’s name is above the door, this is not Le Gavroche – nor does it pretend to be. Instead, the restaurant is reasonably accessible; on the tourist trail between the Houses of Parliament and Buckingham Palace, but not a tourist trap. Fittingly, the recently refurbished space is regal but comfortable, flooded with natural light at lunch. Beneath a soundtrack of lively instrumental jazz, the new dining room is festooned with burnt orange blanquettes, offset by a general teal colour scheme. At the back of the room, the restaurant’s impressive wine selection acts as a striking focal point. 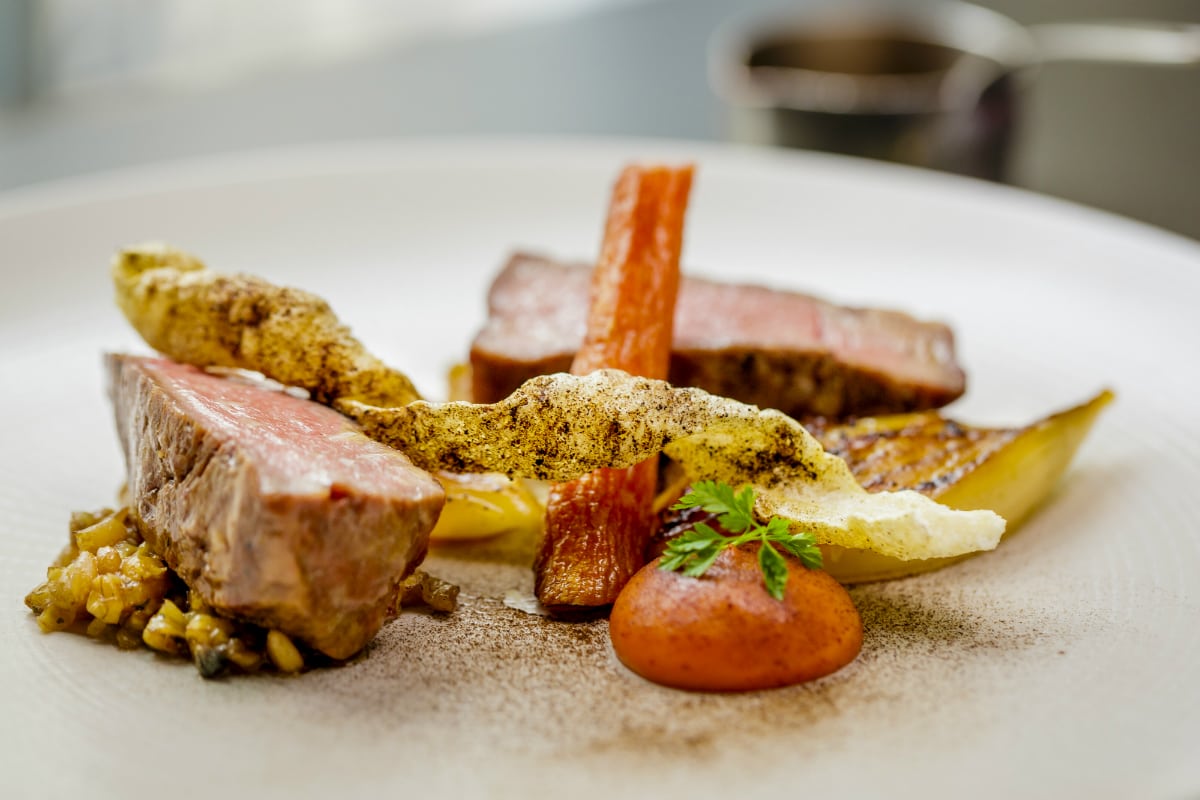 First opened in 2010, the restaurant’s kitchen is lead by Head Chef Steve Groves, having previously worked at The Inn at Perry Cabin in America, and Launceston Place. (While working at Launceston Place, the chef was crowned winner of MasterChef: The Professionals 2009). As for the food, Roux at Parliament Square’s menus are fairly modern, showcasing seasonal British produce executed flourishes of French technique (naturally) and a ubiquitous flair of modernity.

From the a la carte menu, a starter of mackerel celebrates the fish in differing iterations. Two tranches are cured and lightly torched, served on a bed of trendier-than-thou quinoa and topped with nuggets of fresh cucumber to contrast the fish’s inherent oiliness, joined by a puddle of smoked buttermilk. The buttermilk isn’t necessarily unwelcome, but brings very little to the dish in terms of flavour. On the side, a paper-thin cracker is topped with raw mackerel dice that harbour an unexpectedly clean taste. Pork cheek is cooked slowly: pliable but not feeble. Already insalubrious, the cheek is served over a slice of filthy rich Mangalitza black pudding and offset by some ribbons of carrot.

Conclusive proof that vegetarian food needn’t be unexciting, a wheel of ricotta gnudi -dusted with semolina to deliver a pleasant crust – is set alongside hunks of salsify and finely chopped Hen of the Wood mushrooms. Each of these elements ensnare a confit egg yolk: orange as the President, with the texture of runny honey. Here, the balance of flavours is tremendous, enough to sate even the most carnivorously devout. Across the table, loin of venison is cooked medium rare, languished over a bed of wilted cabbage spiked with lardons of smoky, salty Alsace bacon which lifts the dish and its accompanying sauce, acting as seasoning. 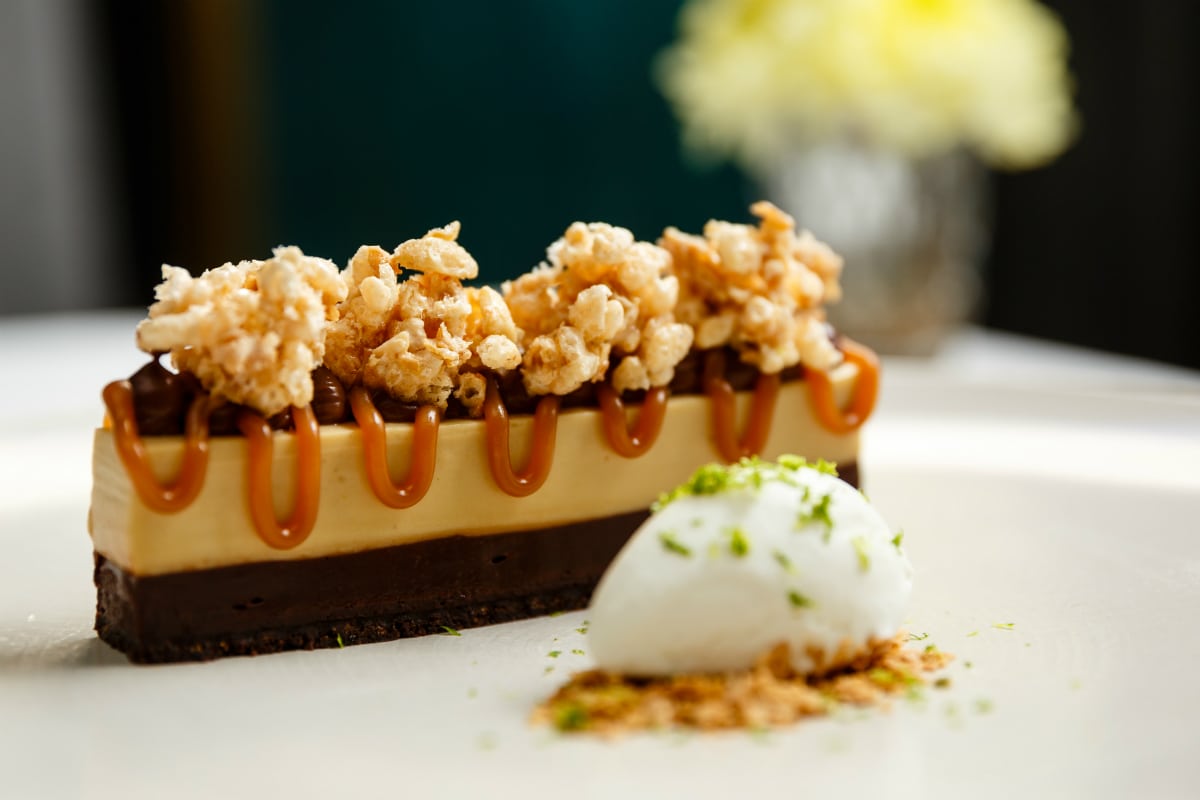 To follow, a Guanaja chocolate dessert with elements of banana, peanut and yoghurt is every bit as rich and decadent as expected – knocking years from one’s natural life span with each bite. In contrast, though; pistachio tart topped with spears of poached rhubarb, convoyed by tart rhubarb jam and aerated white chocolate mousse, is refreshing – light, even – without seeming like an absolute cop out. Showcasing British seasonal ingredients and far removed from the grandiose notion of licentious haute cuisine the restaurant is clearly striving to cast off. This dish exemplifies the superlative cooking displayed at Roux at Parliament Square.