In my constant search for the perfect restaurant, commenting on my findings along the way, I’ve eaten at a swarm of completely conflicting venues. Frankly, so long as the food is palatable and isn’t served on slate, chopping board or miniature shopping trolley; I don’t care whether I’m sitting at a plush table with 36 […] 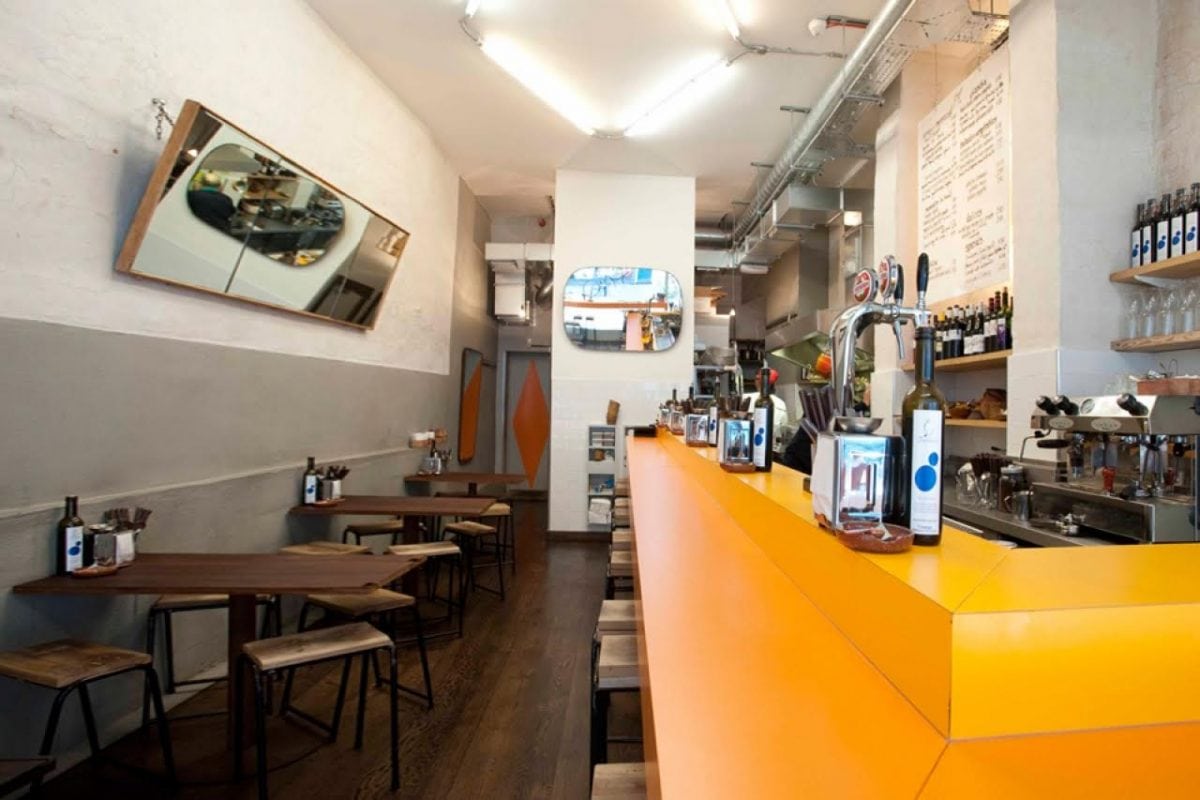 In my constant search for the perfect restaurant, commenting on my findings along the way, I’ve eaten at a swarm of completely conflicting venues. Frankly, so long as the food is palatable and isn’t served on slate, chopping board or miniature shopping trolley; I don’t care whether I’m sitting at a plush table with 36 forks, or on the floor of a shack, packed in alongside hundreds of personal space invaders.

Fine dining is fine, but sometimes the associated stuffiness can become tiresome. Fortunately, London has a great number of restaurants serving genuinely exciting food, but without a strict dress code or a Maitre D’ who insists on explaining each element on your plate, practically touching your hay-smoked dove parfait with their little finger. Morito, in the middle of Exmouth Market, is a definitive example, opened by husband and wife team Sam and Sam Clark as a sister restaurant to Moro, next door. A tiny tapas and mezze bar, Morito’s main focus is a marigold-orange bar lined with closely neighbouring seats, while two chefs cook and serve small plates dishes on the other side. Opposite, a small number of tables line the wall for parties larger than two. The décor is simple, but the slenderness contributes to an atmosphere that’s more intimate than cramped.

Since this restaurant opened in 2010, another outpost of Morito has also taken over a larger venue on Hackney Road. At both restaurants, the menu changes on a daily basis and is largely comprised of Southern Mediterranean dishes. During our visit to Exmouth Market, for instance, we begin with aggressively grilled calçots (a type of Catalan onion) wrapped in newspaper to steam. As we unwrap the parcel of newspaper, Donald Trump’s terracotta face stares up at us, smattered with delicious embers of burnt onion. Until recently, calçots have been scarcely available in London, which is a shame given the incredible flavour that’s somewhere between spring onion and leek, but with an intense earthiness. This particular version of the dish is well-executed and the rich, almond-heavy Romesco sauce is a sating accompaniment.

A bowl of padrón peppers, here, are treated with the utmost deserved respect. There is nothing, bar a pinch of salt and a grill, that can enhance the flavour of these mild green peppers. It’s even more refreshing to find that the chefs at Morito clearly agree. The dish is simple yet remarkable, without unnecessary fuss or perfunctory bastardy. Another Spanish classic, chicharrones features cubed pork belly that tastes as though roasted on a low heat for a long period of time, then fried in a white-hot pan to finish. As a result, the outside of the meat is crisp and golden, while internal layers of fat melt on the tongue and taste predictably delectable.

Borani, an Iranian appetiser of strained yoghurt is joined by beetroot and topped with crumbled feta cheese, walnuts and dill. It’s enough to convert even the biggest beetroot-sceptic, with the earthy sweetness of beetroot just enough to cut through the lactic acid of the yoghurt and cheese. Another entirely vegetarian dish, ‘Crispy Aubergine’ is the restaurant’s term for chips of on-trend aubergine, fried then dressed with whipped feta cheese and saccharine date molasses. The texture of the aubergine is delightful, alas the overall dish is over-sweetened.

Much better is a dish of spiced lamb. We both agree that it’s the best thing we eat here, by quite some distance. Splinters of slow-cooked lamb shank, spiced with cumin, coriander seed and cinnamon, loll beguilingly on a bed of silky aubergine puree. The cooking and spicing of the lamb are each near perfect, working expectedly well with the aubergine. This is then sprinkled with shredded mint, toasted pine nuts and the juiciest pomegranate seeds on this side of Western Asia. The result is an explosion of complementing flavours, and the dish is thus nothing short of exceptional. Just be sure to order at least two portions: it’s too good to share.

To finish, a bowl of dark chocolate mousse is drizzled with olive oil and topped with a meagre pinch of salt. The oil complements the chocolate’s intense richness, but the salt suppresses any overwhelming sweetness. As is the case with just about everything we eat, the dish is, by now, expectedly enjoyable. Like so many small London restaurants serving mind-blowing food, at the moment, this branch of Morito doesn’t take bookings for dinner. But with this food and sprightly atmosphere, Morito is one of the city’s only restaurants to offer dinner that’s actually worth queuing and waiting for.

Morito can be found at 32 Exmouth Market, London, EC1R 4QE.