This is the dramatic moment a thug armed with an axe was TASERED by police in front of horrified shoppers in a busy city centre. Rinemo Burrowes, 22, was pursued by officers from Birmingham New Street station after they received reports of a man brandishing a weapon and alarming passengers. The yob was bundled into […] 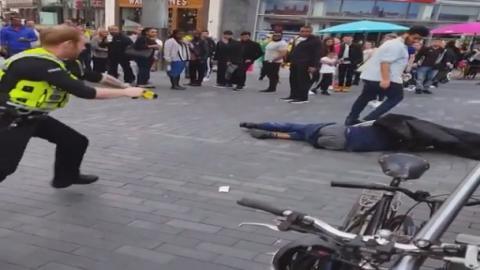 This is the dramatic moment a thug armed with an axe was TASERED by police in front of horrified shoppers in a busy city centre.

Rinemo Burrowes, 22, was pursued by officers from Birmingham New Street station after they received reports of a man brandishing a weapon and alarming passengers.

The yob was bundled into a wall by a have-a-go hero but managed to run off again before he was finally cornered by police outside the Bullring shopping centre.

The dramatic footage emerged showing the moment Burrowes fell to the ground as an officer discharged a 50,000 volt Taser in Birmingham city centre. The shocking 56-second clip shows the armed yob, who is wearing a cap and carrying a coat, jogging towards stunned shoppers.

Burrowes, of Northfield, Birmingham, was charged with possession of an offensive weapon and resisting a police officer after the dramatic incident on June 19 last year.

He admitted the offences and was jailed for 18 months at Birmingham Crown Court on December 8.

PC Rob Kelly, who was one of the British Transport Police officers on the day, said: “Burrowes claimed he was taking the axe to his mother’s house for sharpening so he could make a bed frame at home.

“He was given numerous opportunities to offer an explanation at the scene, which he never did.

“Instead, he chose to run off from us – carrying his weapon through a busy city centre – and was also seen reaching for it when officers tried to stop him.

“With previous convictions for burglary and robbery, all involving a weapon, we suspect Burrowes’ intentions for carrying the axe were not entirely innocent.

“While we are extremely grateful to the member of public who intervened, this is not something we would advise people do because, as this incident shows, you never know what a fleeing suspect might have on them.

“Thankfully on this occasion, nobody was hurt and the public should be reassured swift action by our officers resulted in an armed criminal being taken off our streets.”