Just a stone’s throw from Paris’ Champs Elysees, Two-Michelin-starred Le Taillevent has become an iconic staple of French gastronomy since opening in 1946. The opening was later followed by a wine-focused sister restaurant, Les 110 de Taillevent, which crossed the channel at the end of 2015, opening in central London. Taking over a location previously […] 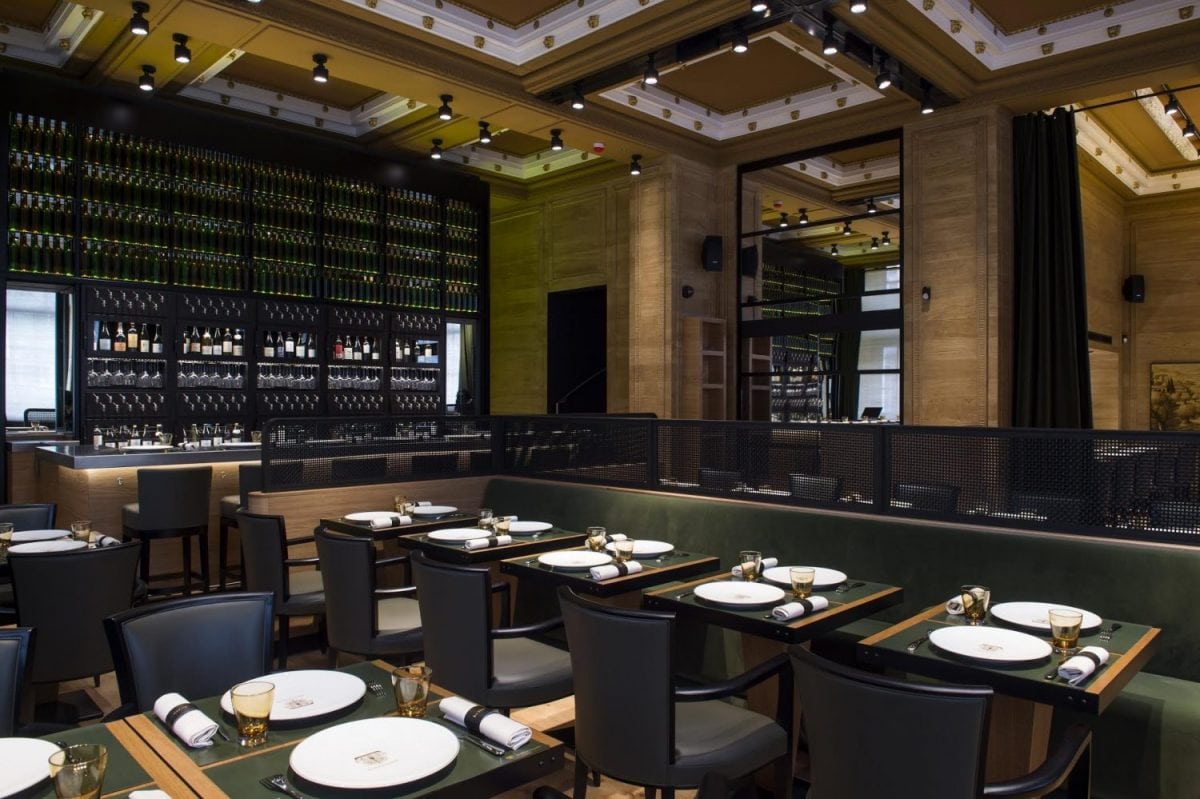 Just a stone’s throw from Paris’ Champs Elysees, Two-Michelin-starred Le Taillevent has become an iconic staple of French gastronomy since opening in 1946. The opening was later followed by a wine-focused sister restaurant, Les 110 de Taillevent, which crossed the channel at the end of 2015, opening in central London.

Taking over a location previously occupied by a branch of Coutts bank, Les 110 de Taillevent has a feature-wall of green bottles matching rich green leather banquettes that make the space look more like the House of Commons than a restaurant. After waiting for a few minutes at the booking desk, we’re taken to a corner table where we share personal space with a couple on the next table. Clutching two large menus, the waitress then utters the most dreaded phrase of any restaurant patron: “allow me to explain our concept.”

Collectively taking over the whole table, both tri-fold menus have a central column of dishes, each accompanied by columns of suggested wine pairings available by the glass, priced from around £8 to upwards of £20. There are 110 (or “cent-dix”) wines available by the glass here, hence the restaurant name. As a result of the concept, this booze-driven restaurant allows customers to have one or two well-paired glasses, avoiding a level of drunkenness that renders it impossible to stagger across Cavendish Square, unaided. Alternatively, there is the chance to take advantage of variety on the way to reaching such a level of inebriation. The over-sized menus, on the other hand, resemble messy excel spreadsheets; the exact type that a profligate Parisian lunch should mark an escape from.

Ordering from the set lunch menu, we begin with a glass of Louis Roederer Brut Premier Champagne – part of a monthly promotion offering a selected Champagne for £10 per glass. As for the food, a velouté of artichoke is velvety with ambrosial depth of flavour, poured table-side over diced Jerusalem artichoke and slivers of deep-fried artichoke, adding texture. On my side of the table, a bed of parsley jelly is topped with shelled mussels, baby shrimp, marbles of cucumber and a foam that looks pretty but delivers very little flavour. The shell fish is well cooked and cleaned, though it is the underlying blanket of herbaceous gelatine that’s the most impressive element of this dish.

A bona fide brasserie classic, blanquette de veau is served with a mound of steamed rice and employs veal slow-cooked overnight. While the addition of carrots renders the dish technically untraditional (colouring the classically white stew) the sauce has a pleasant helping of cream, while button mushrooms have a contrasting texture against the ultra-soft veal which melts on the tongue. A simple dish of sole meuniere features fish that’s just on the right side of being overcooked. It is not particularly unpleasant, though it’s far from outstanding. Far better are side dishes of butter-drenched salsify and silky pomme purée made with more cream than I’d care to imagine. After a fair wait between courses, we finish with a hot chocolate mousse. Made with 70 per-cent cacao, the mousse if rich, light and enjoyable, yet it’s the accompanying glass of Commandaria “Saint Nicholas” 2010 from Etko, Cyprus that’s the real crowning glory of dessert, and of the whole meal.

Although expensive, the food here is generally well executed; the set lunch menu is worth taking advantage of (two courses for £25, or three for £30). Though the service is friendly, it is not necessarily efficient, especially during a narrow week day lunch window. Unsurprisingly, it’s the focus on wine here that’s most impressive. As a result, Les 110 de Taillevent seems far more a fantastic wine bar serving good food, rather than an exceptional concept restaurant.