When Dabbous closed, I felt bereft. Ollie Dabbous had cooked (or at least been involved with) some of the best meals I’d eaten. Ever. I longed and longed for the restaurant’s unique model of fine dining to fill the gaping hole in my heart and rumbling stomach. The restaurant and its eponymous chef’s cooking style […] 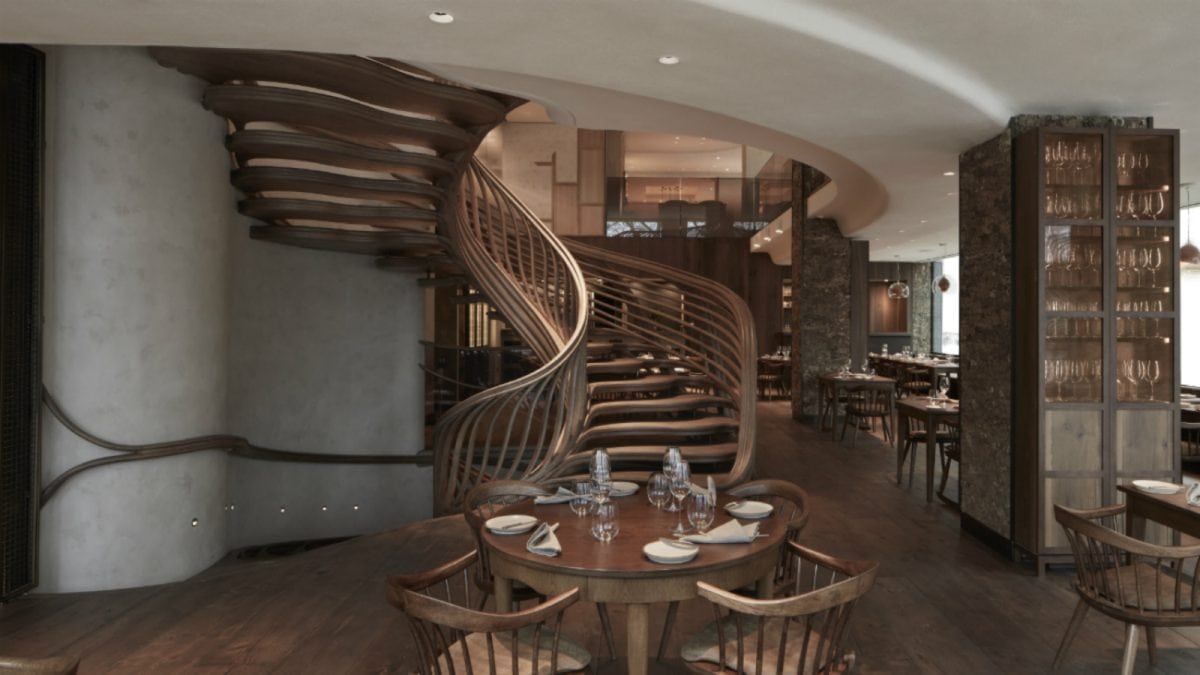 When Dabbous closed, I felt bereft. Ollie Dabbous had cooked (or at least been involved with) some of the best meals I’d eaten. Ever. I longed and longed for the restaurant’s unique model of fine dining to fill the gaping hole in my heart and rumbling stomach.

The restaurant and its eponymous chef’s cooking style has since been imitated, but never matched. Soon after the closure of Dabbous, Ollie worked on the launch of Henrietta in Covent Garden, but the restaurant was never welcomed with the same rapturous devotion as the original. A new joint venture with Hedonism Wines, Hide opened last month and the fire has been reignited. The restaurant has already received rave reviews and has been constantly busy.

Opposite Green Park, Hide occupies a vast, 174-cover space set across three floors, split into three semi-separate entities. Underground, the restaurant has a stand-alone cocktail bar, while the upstairs space (‘Above’) is a fanciful affair, focussing on a £95 tasting menu. The ground-floor, however, is a less formal space open all-day. Service, on this level, is equally unfussy but seamlessly professional.

From the outside, the corner venue resembles a glass-fronted car showroom, while the inside is comfortable, boasting sweeping views across the park. Inspired by Mother Nature, the space is festooned with wooden surfaces and placated by a staircase sculpted from European Oak, corkscrewing the entire building. With the design of Hide, no expense has been spared – there’s even a drive-in private dining room, with its own car lift – but this isn’t just another Mayfair playground for the super-rich and the terminally tasteless (Sexy Fish, Annabel’s, Novikov). Complementing Ollie Dabbous’ menu, wine also has a prominent focus at Hide, with 6,500 wines available, catalogued within a leather-bound iPad. Head Sommelier Piotr Pietras (previously at Launceston Place) is on hand to suggest expert pairings.

At Hide Ground, the menu reads like a dream, flecked with some classic Dabbous dishes and flavour combinations. As a result, it’s easy to feverishly over-order. Lunch begins with beef tartare favouring Simmenthal beef aged for seven years. This is enriched with the somewhat unorthodox – yet ingenious – pairing of tobacco, wrapped in nasturtium leaves like fresh, Vietnamese summer rolls. Chicken liver parfait, on the other hand, is silky and retains the core ingredient’s integral flavour above the clear abundance of cream employed. Light and unimprovably flavoursome, the parfait is well-matched with an accompanying chutney of fig and syrupy hibiscus, plus doorstops of thick, buttery brioche.

A flatbread, cooked over charcoal, is topped with cep mushroom shavings and lemon thyme, showcasing the chef’s penchant for seasonally led, vegetable-focussed cooking without redundant flummery. A dish starring lavish Carabinero prawns is available with the optional addition of Exmoor caviar (possibly favoured by the drive-through private diners). Without, the plump prawns, red as ox blood, are served raw; immersed in a pool of deep umami broth made using the prawns’ shells. Demonstrating some Nordic influences, the dish has unrivalled elegance, finished with sticks of celery and dill fronds providing added texture.

Hide’s octopus main features a large tentacle, aggressively cooked over fire. Underneath the charred crust, the octopus’ meat is graceful, perfectly cooked and cleverly partnered with the sweetness of Moscatel grapes and white miso, crowned with a bed of edible foliage. Herdwick lamb is also cooked over embers, served medium-rare with well-rendered fat. This is escorted by a wedge of heavily charred aubergine and a whisper of violet-infused mustard.

To finish, Hide’s warm acorn cake has already become a firm favourite. Served in a cast iron tureen, the cake’s labyrinth of pastry layers is lashed with a choice of rums, ultimately similar to rum baba – but infinitely lighter, crispier, neater. Ample for two to share, the cake is studded with raisins and fatty acorns (not unlike chestnuts) and doused with smoked caramel. For something a little lighter, four canelés are glossy – cooked in beeswax – and crowned with Maraschino cherries, harbouring a smack of sweet vanilla. A menu of four savoury desserts is also served, some of which I intend to taste on returning for dinner in due course. The tarte fine of Kentish apples and homemade black pudding with mustard crème cru, for instance, appears particularly intriguing.

With such balance, such attention to detail, Ollie Dabbous remains at the top of his game with the cooking demonstrated at Hide. Although somewhat pricey, the restaurant is an absolute must-try: a strong contender for London opening of the year, thus far.