Modern Indian food is in vogue. While Mayfair has reached saturation point, with a ratio of almost one Indian fine dining restaurant per local resident, surrounding areas such as Soho and Marylebone are thriving with more casual restaurants celebrating Indian and South Asian cooking (Kricket, Hoppers, Tamarind Kitchen). Bridging the gap between the two, a […] 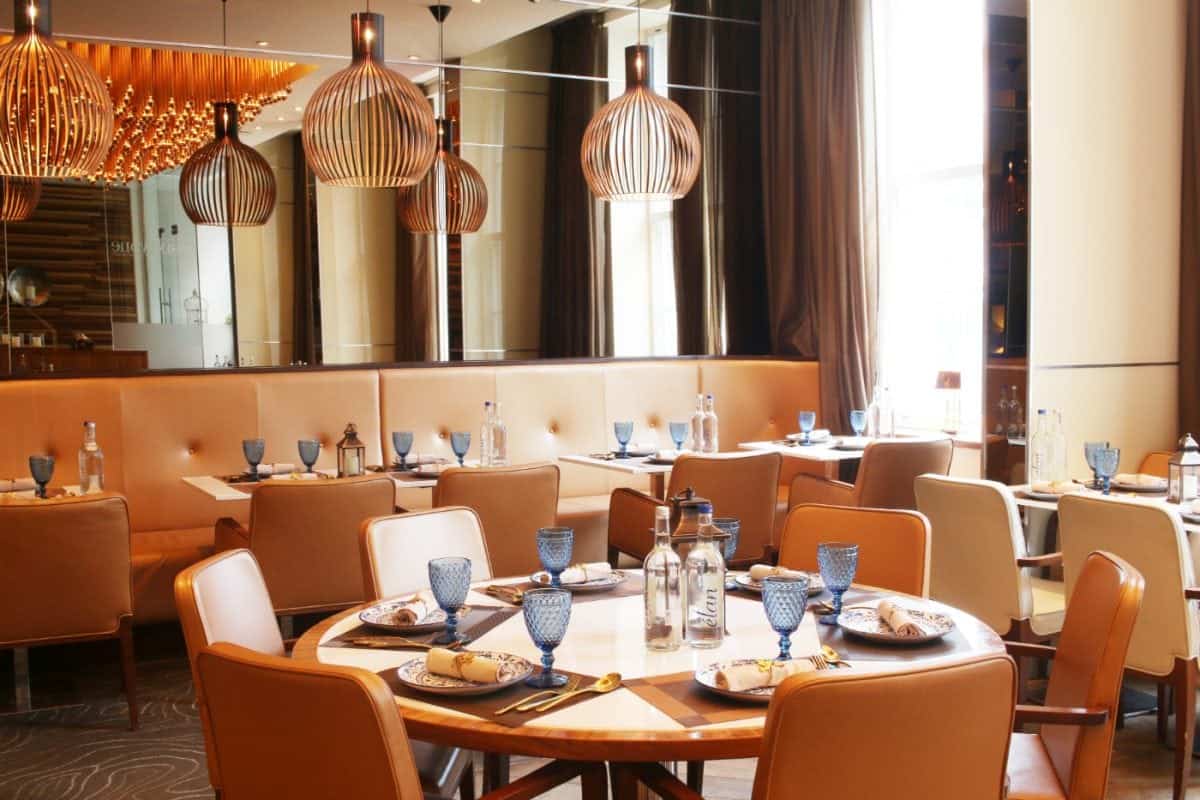 Modern Indian food is in vogue. While Mayfair has reached saturation point, with a ratio of almost one Indian fine dining restaurant per local resident, surrounding areas such as Soho and Marylebone are thriving with more casual restaurants celebrating Indian and South Asian cooking (Kricket, Hoppers, Tamarind Kitchen). Bridging the gap between the two, a second branch of Hankies opened within the Montcalm Hotel near Marble Arch earlier this year, taking over Nirvana Kitchen’s former site.

While Hankies’ original London restaurant on Shaftesbury Avenue is more of a humble café, the Marble Arch branch has a fairly refined setting. Inside, the dining room’s beige and tan palette is fusty, but offset by hues of gold and rich azure blue from the crockery and wine chalices sourced from Indian markets and antique stores. During lunch, plenty of natural light floods the space, which, alongside the unobtrusive service, makes Hankies seem far more comfortable than typical hotel restaurant dining rooms. Here, the room’s main feature is a burning hot tawa, used to cook hand-stretched, folded roomali roti bread – also known as hankies (hence the restaurant name).

At Hankies Marble Arch, chef and founder Anirudh Arora has a mission to make authentic Delhi street food accessible and enjoyable within this central London setting. Made up of sharing-sized small plates, dishes are reasonably priced, with the most expensive single dish priced at £9. To begin, the restaurant’s namesake is available in two variations. Original roomali roti (£1.75) is somewhat plain in flavour, but acts as a fine carbohydrate blanket to mop up sauce. The spinach roomali (£3), on the other hand, is slightly slick with garlic and herb oil, but harbours some spiced feta and roasted tomato: it’s a welcome play on a cheese and tomato sandwich.

Starring fiend of the vegetable patch, bhindi bhel (£3.50) is an okra dish. Here, though, the okra is crispy and magnificently devoid of its inherently emetic texture, like slimy tunnels of magnificent puerility. This iteration is astoundingly edible, joined with an assortment of puffed rice, onions and fresh coriander – not unlike Sri Lankan kothu roti – and convoyed by a blob of sweet chutney. Also enjoyable is a shammi kebab (£5.50) of venison mince that’s spiced with fennel and moulded into a hockey puck, grilled and topped with a quenelle of yoghurt cheese far less disastrous than its name suggests.

Bhatak Ki Khurchan (£5.50) has an underlying fusion element with flourishes of Chinese technique. Crispy duck is teamed with masala cashew nuts then topped with mint, watermelon segments and a sweet sauce that pushes the dish to the precipice of dessert territory. Better is a china pot of slow braised goat mince (£6.50) with depth of flavour far superior to lamb, considerably better suited to the escorting flavours of black cardamom and ginger – topped with a pickled quail’s egg which harbours a menially soft yolk, oozing into the mince mixture is made with black lentils and cream; well-spiced but thin in texture, though it’s a fine puddle to be absorbed by an additional round of ‘hankies’.

To finish, Gulukhand Kheer (£3.50) is a rice pudding, of sorts, topped with caramelised mango and ginger honeycomb. While the rice is pleasingly al dente, the entire dessert is unattractively lactic, drenched in milk. Far better is the masala-spiced chocolate fondant (£3.50) with its molten centre. Although some dishes require tweaking, Hankies is a hidden gem – serving mostly promising North Indian street food, set back from the chaos of Oxford Street, offering exceptionally good value.