Donald Trump met familes affected by school shootings including the Parkland, Florida atrocity yesterday to hear their concerns Present at the emotional White House meeting he had promised them were children who had survived the shooting spree at Marjory Stoneman Douglas High School last week and a breaved family of a child who had been […] 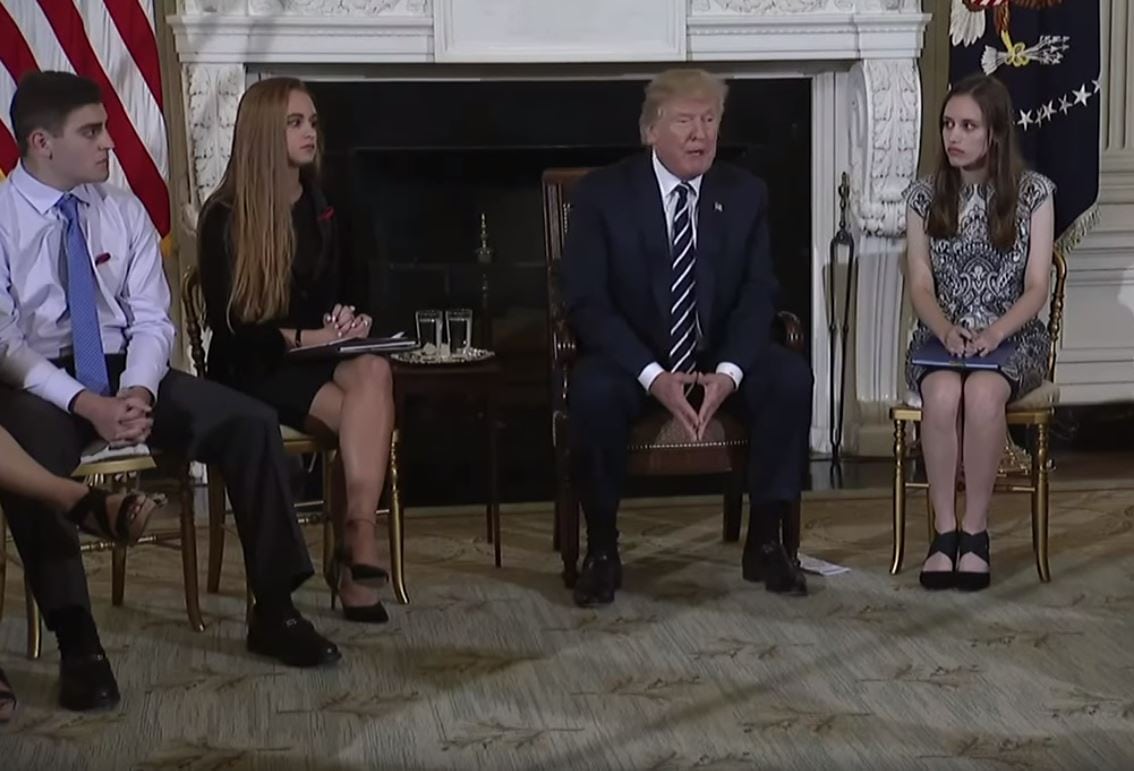 Present at the emotional White House meeting he had promised them were children who had survived the shooting spree at Marjory Stoneman Douglas High School last week and a breaved family of a child who had been killed.

Among the 40 students and parents invited to Washington were Darrell and Sandra Scott, whose daughter was killed in the Columbine, Colorado school shooting and Nicole Hockley and Mark Barden, whose children perished at the Sandy Hook school massacre in Connecticut.

“I just want to say before we begin, because I want to hear you, but we’ll be very strong on background checks, very strong emphasis on the mental health of somebody,” Donald Trump told the families, before suggesting that the solution couls be arming teachers too.

The US President whose election campaign was heavily funded by gun industry lobbyists affiliated with the National Rifle Association (NRA) outlined the shocking tactic favoured by the NRA.

“This would only be obviously for people who are very adept at handling a gun,” he insisted.

“It’s called concealed carry – where a teacher would have a concealed gun on them, they would go for special training and they would be there, and you would no longer have a gun-free zone.”

“A gun-free zone is, let’s go in and let’s attack,” Trump added.

“If you had a teacher … who was adept at firearms, it could very well end the attack very quickly,” insisted Donald Trump, who acknowledged it was a controversial idea.

The NRA spent more on TV ads to get the Republican presidential candidate elected than the Trump campaign spent on itself.

Nikolas Cruz, 19, who had been expelled from Marjory Stoneman Douglas High School for disciplinary issues bought the AR 15 assault rifle he is accused of using in the second deadliest school massacre in US history a year ago. The shooting spree in Parkland, Florida last week left 17 dead and has shocked the political class as students have vowed to march on Washington to shame politicians in the pocket of the NRA.

Donald Trump sat surrounded by pupils and parents who prayed and wiped away tears as they spoke.

“I don’t understand why I can still go in a store and buy a weapon of war, an AR,” wept Parkland pupil Samuel Zeif, 18, adding that he heard of 15-year-olds buying rifles.

“Let’s never let this happen again please, please,” said the 18-year-old who told the President how he had texted his family during the massacre.

“It’s not left and right,” said Cary Gruber, a Parkland parent. “If you can’t buy a beer, shouldn’t be able to buy a gun”.

The President was also criticised as unbelievably eagle-eyed people watching took to Twitter to point out that he was photographed appearing to hold a cue card reminding him to say sympathetic things and act as if he is listening to the concerns of the bereaved families:

This is a real photo. Trump needed a cheat sheet written by someone else to remind him to say “I hear you” to people affected by gun violence. (source: https://t.co/zVCWSf0RCW) pic.twitter.com/IaQgOTJshI