Of all the earth’s gifts, there are few foods that aren’t instantly enhanced by the addition of sesame. So it’s hardly surprising that the prawn toast at duck duck goose, with its thick layer of prawn mousse and vaster area to be coated with toasted sesame seeds, is so implausibly transcendent. A stone’s throw from […] 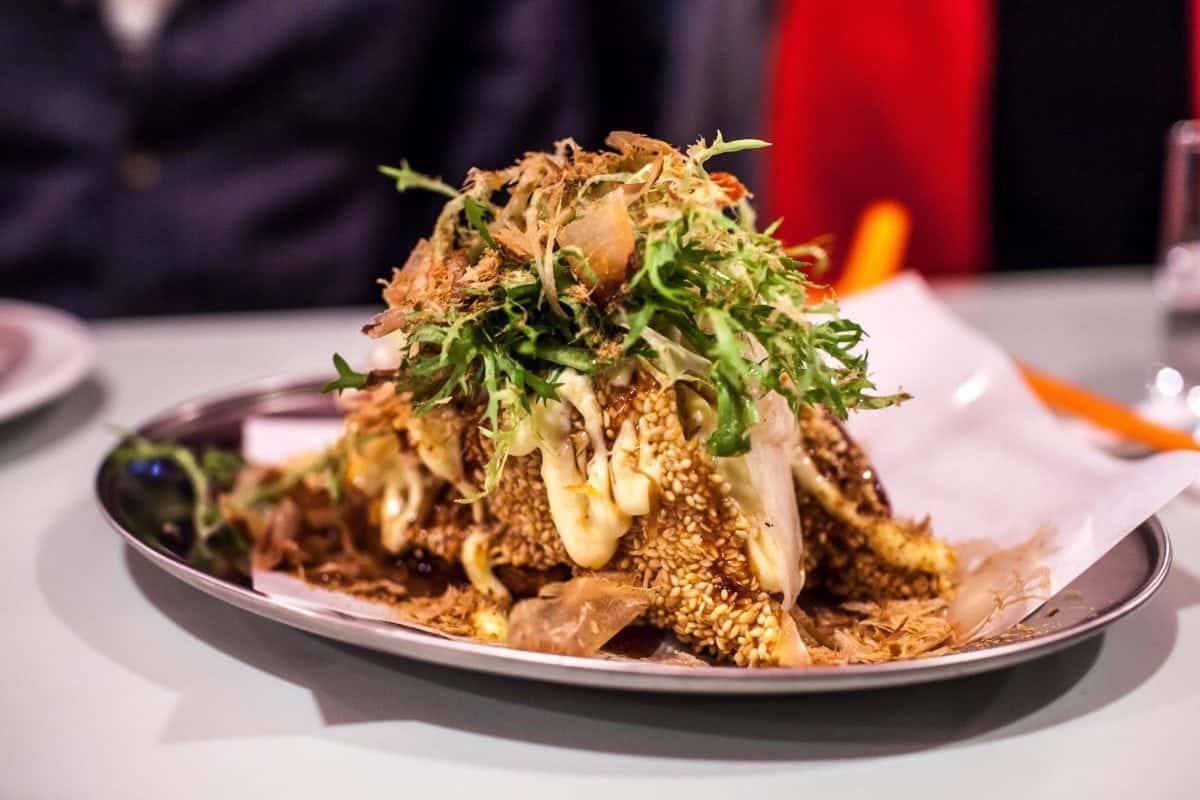 Of all the earth’s gifts, there are few foods that aren’t instantly enhanced by the addition of sesame. So it’s hardly surprising that the prawn toast at duck duck goose, with its thick layer of prawn mousse and vaster area to be coated with toasted sesame seeds, is so implausibly transcendent.

A stone’s throw from Brixton’s mainline train station, duck, duck, goose is just one of the restaurants situated within Pop Brixton. Opened in 2015, Pop Brixton is a community project situated in an unused car park within one of the city’s trendiest neighbourhoods, dedicated to supporting the Brixton community and independent businesses. Alongside restaurants such as Zoe’s Ghana Kitchen and Smoke & Salt, Pop Brixton is home to a number of street food traders, independent retailers, a local barbershop and a radio station.

Duck duck goose opened earlier this year by London-born Oli Brown, heavily inspired by his time living and working in Hong Kong. Inside, the 24-cover space is decorated with a firm nod to the style elements of the Cha Chaan Teng cafés that began to open in Hong Kong after the Second World War. Laminate Birch ply booths are paired with vinyl floor tiles to emulate the ‘wipe clean’ attitude of Hong Kong canteens, accentuated by a colour palate of greens, warm oranges and soft pink. On a balmy July evening, however, the inside space is hotter than the inside of a McDonald’s apple pie, so we decide to sit outside (the pastel pink bench seat actually matches the shirt I’ve purposely worn in a vain attempt to fit in with a crowd of locals considerably cooler than I). With the food, there’s a pronounced focus on barbecued meats, all of which are air-dried and roasted in the on-site custom built air dryer and duck oven. The rest of the menu split into traditional Chinese cooking techniques: ‘fried’, ‘steamed’, ‘from the wok’.

First, the prawn toast served at duck duck goose is an amplified version of the often Anglicised Cantonese takeaway favourite. I’d adopt the Americanism of describing it as prawn toast ‘on steroids’; but, really, there’s nothing good about having a bloated moon face, tiny Trump-like hands and a falsetto speaking voice. Instead of the hollow fried bread topped with burnt sesame seeds, so many offenders are guilty of serving, the ‘Prawn Toast Revisited’ is heavily inspired by a similar dish served at Ho Lee Fook in Hong Kong. White bread sandwiches a portion of juicy prawn mousse so generous it bulges from the fried bread covering like receipt-stuffed wallets in the front pockets of skinny jeans. The extra surface area also allows for the addition of considerably more sesame seeds than traditional, dressed with tonkatsu sauce, kewpie mayonnaise and a heavy-handed sprinkling of bonito flakes. This is comfort food at its absolute best: possibly one of the best dishes currently available in London, in fact.

In 2017, so many still snobbishly eschew the notion of travelling so far south for a good meal. In doing so, the food at duck duck goose is thus reserved for those of appreciative of brilliant cooking. The ‘Prawn Toast Revisited’ is a must try, best with a bottle of pale ale, while the set lunch menu boasts exceptional value (mussels with black beans and Shaoxing wine, or braised pork ribs with fermented tofu and wild garlic, both served with steamed rice for £8.50). Roast goose is also available on Saturday evenings, for which I’ll return as soon as possible.